William, the original of Elizabeth's James, is getting old and white-muzzled but he remains full of energy and personality. This little guy's been part of our pack of dogs almost ten years, ever since he showed up while I was weed-eating down along the hard road near our mailbox. He was a healthy, exuberant little dog and he frisked after me and did everything in his power to be winning. As I continued with my weed-eating, I noticed that on the few occasions a vehicle went by, the little dog would stop following me to run hopefully after each car. I concluded that some unfeeling, irresponsible, expletive deleted person must have very recently dumped him on our country road. When I'd finished my weed-eating, the little dog was still with me so I put him in the truck and took him to the house.

Calls to nearby neighbors were fruitless -- everyone disavowed knowledge of this little fella. So we kept him -- the smallest dog we've ever had.

We suspect that he has dachshund and Chihuahua in his background -- a Dachuahua, we tell people. He's so small that he gets all sorts of privileges that our normal sized dogs don't enjoy -- sleeping on our bed all night, sitting on the table to catch the morning sun. Like many Chihuahuas, William is very sensitive to the cold and winter is something of a trial for him. 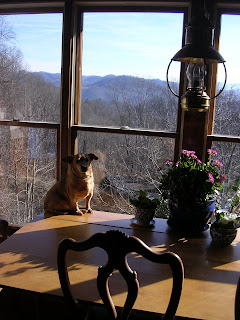 Once I bought him a nice little turtleneck dog sweater, thinking this would be just the thing for Shiverin' Bill, as he's sometimes called. I put him in my lap and pulled it onto him -- a perfect fit! Then I set William down on the floor. He promptly fell on his side and stayed there, deaf to my praise of how handsome he looked. I picked him up, set him back on his feet, and watched as he fell on his side once again. It was hopeless -- William will not wear a sweater. He'd rather sit on the table in the morning sun, thank you very much. 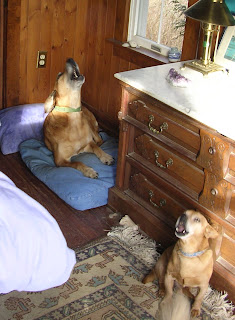 Like the rest of our dogs, William lifts his voice in song as part of the morning dog chorus. He sings soprano, though he's very manly in other respects. "Stud dog' we call him, as he growls the two Border Collie males away from Maggie, the red hound, who he's pretty sure is his girl. He's a funny little dog and always the popular favorite of our visitors, in spite of his determination to put his tongue in their mouths. ('The Bob Packwood of dogs' is yet another of his many names.) "Heh, heh, you know you want it," he says as he makes a determined assault on yet another unwary person who has let him on her lap.

{Remember: Leave a comment and your name will be put in the pot for a drawing on March 31 for an early copy of In a Dark Season.}

Funny how dogs can so easily steal our hearts. *sigh*

No need to go in the hat, but I couldn't resist letting you know that the story about William in that sweater just made me laugh out loud at my desk. At some point, it would be kind of great to assemble the 100s of pictures of him over the years--I think he was almost as photographed as the two brides at the weddings, and he is certainly the most popular guy at the Easter Party! No one, man or woman, can resist those little quaking charms...

Amelia (my niece, who knows William of old) is right -- William is the single most-photographed person, place, or thing on our farm. Someday I'll put up an album of his pictures for all his admirers . . .

And that reminds me of a story I should have put in the post. A few years back, during a weekend of festivities down at my younger son's house, one of the party guests, a great big fella a little the worse for all that partying
came staggering out to meet us, almost tearful with emotion and cradling William in his arms.

"He loves me, man! He's my little buddy and he loves me!"

William played it for all it was worth, reaching up to lick his new buddy's face.

Adajean Samson in Tampa told me about your website. Your photos and stories are so much fun. I am in Blowing Rock in the summer so if you are there, please call. Barbara Romano

Oh, my! Barbara Barritt! I have such fond memories of you from Camp Junaluska all those years ago -- you were THE ideal for so many of us junior campers. I see from your web page that you're still an outdoors woman.

And if you ever get my way (Marshall -- about an hour north of Asheville) let me know!