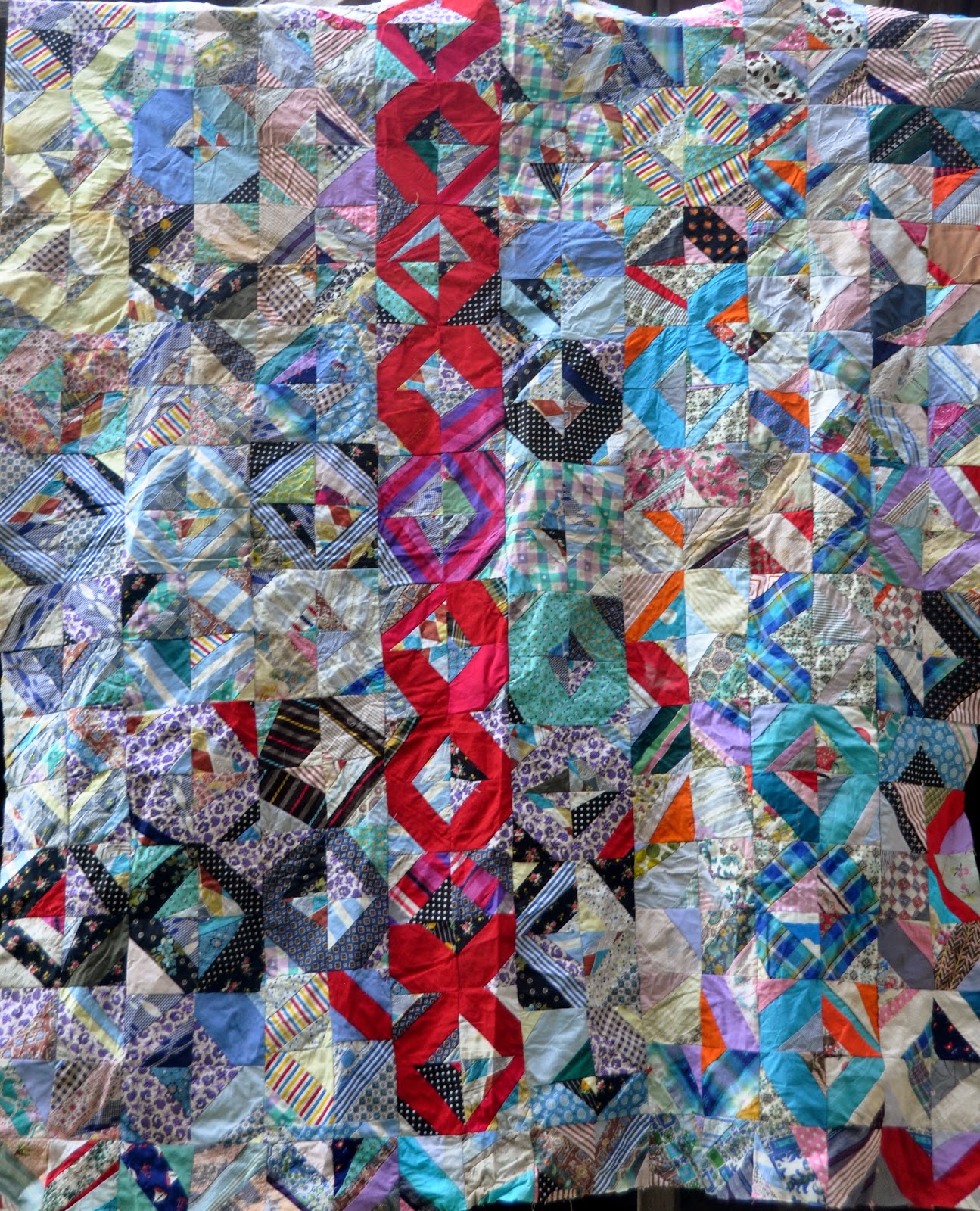 This is the other side of all those squares of newspaper I showed you yesterday -- a string-pieced quilt top. I was amazed when one of my students passed on two antique quilt tops to me, saying she had no place to display them. Thank you so much, Dannie! 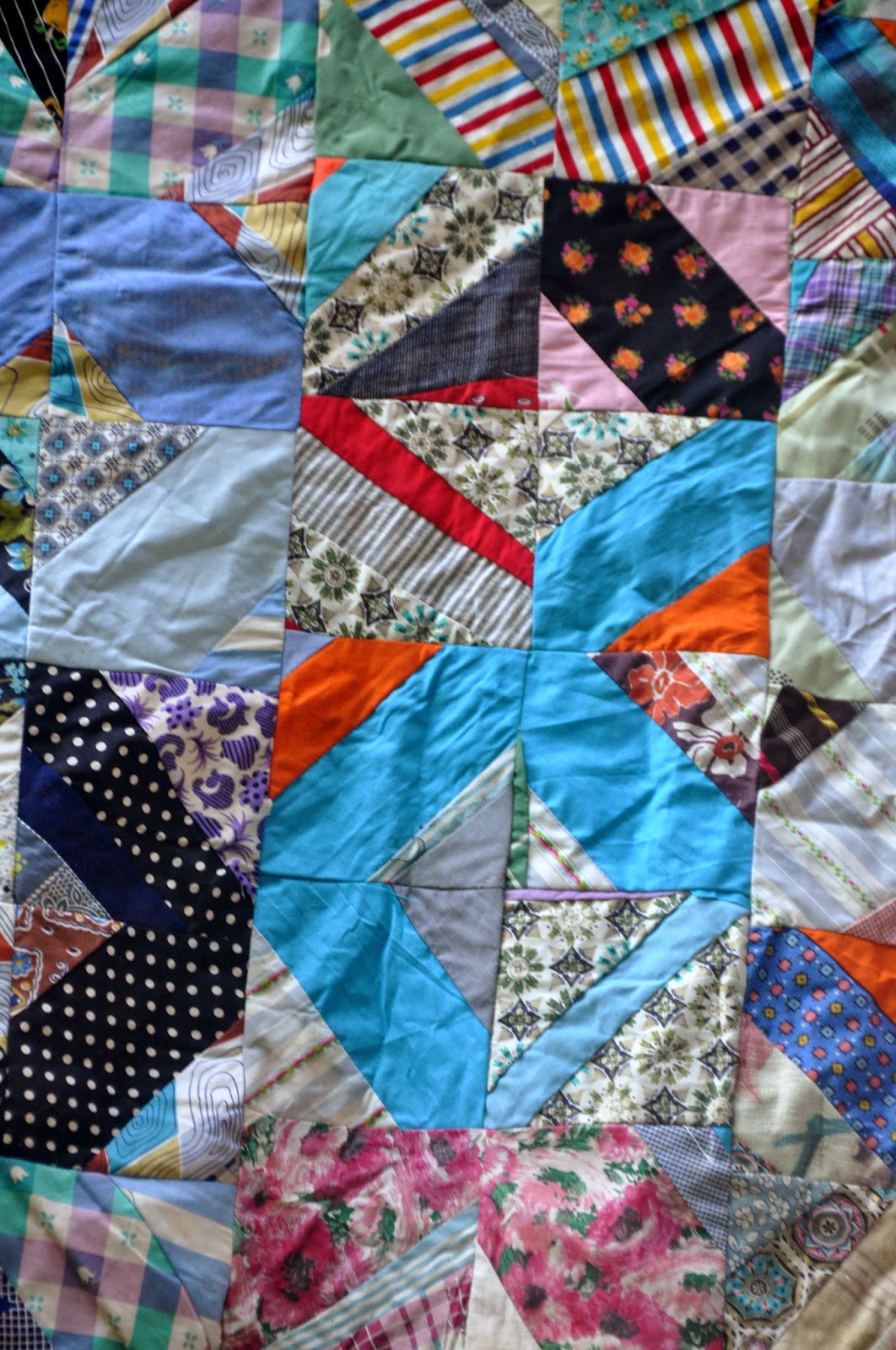 This quilt, as a date on one of the newspapers tells us, was at least partially pieced in 1961 -- or after. Sometimes a quilt gets worked on over a long period of time and even by several generations.

Some of the newspaper squares are dated 1959 -- and looking at the quilt it seems as if two different tastes at work -- subdued and subtle in the upper left corner and then there's all that red in the center and orange on the right. Of course it could well be the same seamstress who got a sudden influx of bright colors in her scrap bag when the Sixties hit -- perhaps she was sewing for a teenage granddaughter. The essence of string quilts is economy -- use what you have. 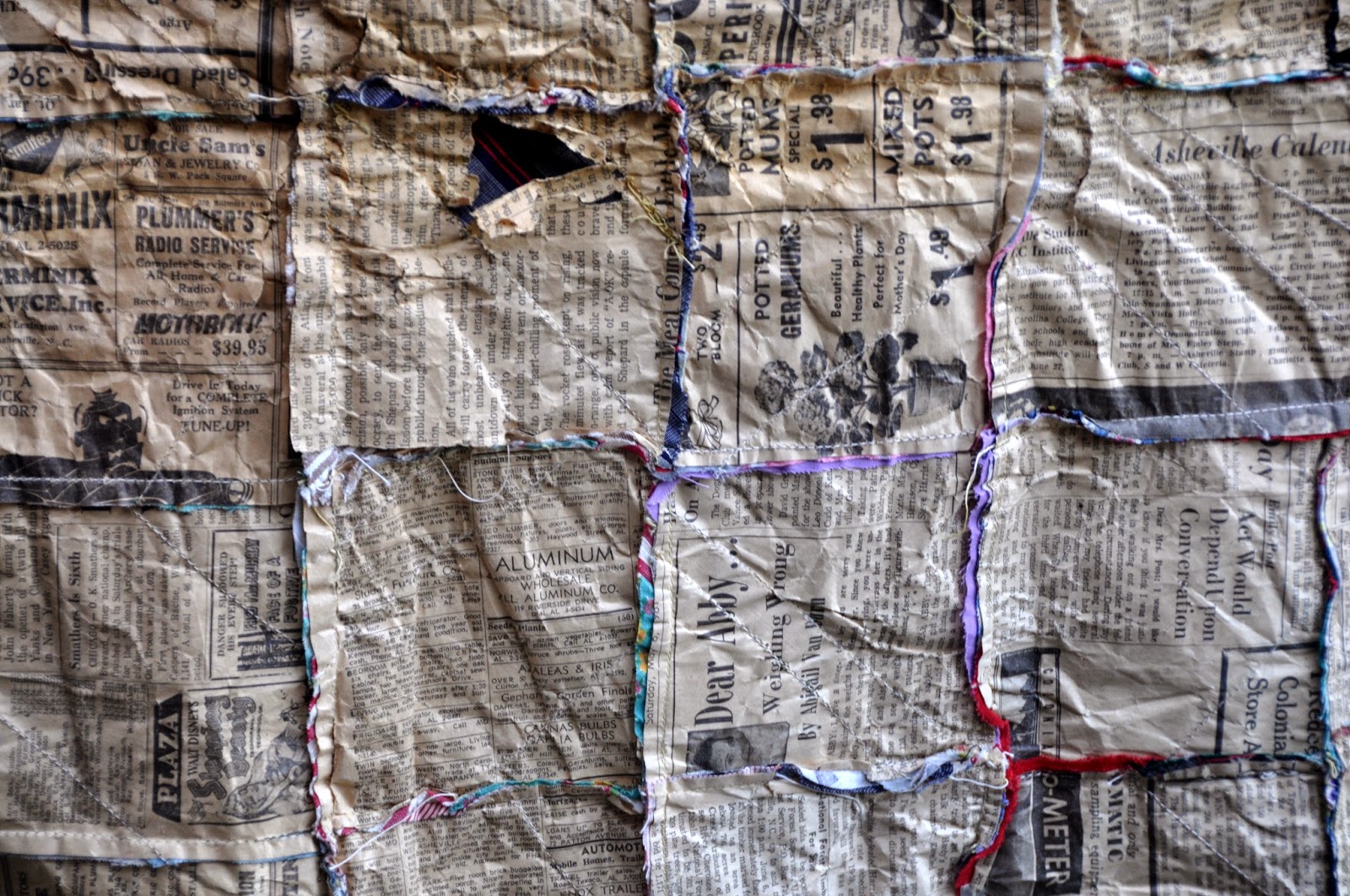 Here's a LINK to a tutorial explaining how string piecing is done. Fun and easy -- and usually one tears the paper away before adding batting and a back. But I'm in love with the historical aspect -- the prices, for instance -- and will likely display the quilt newspaper side out. 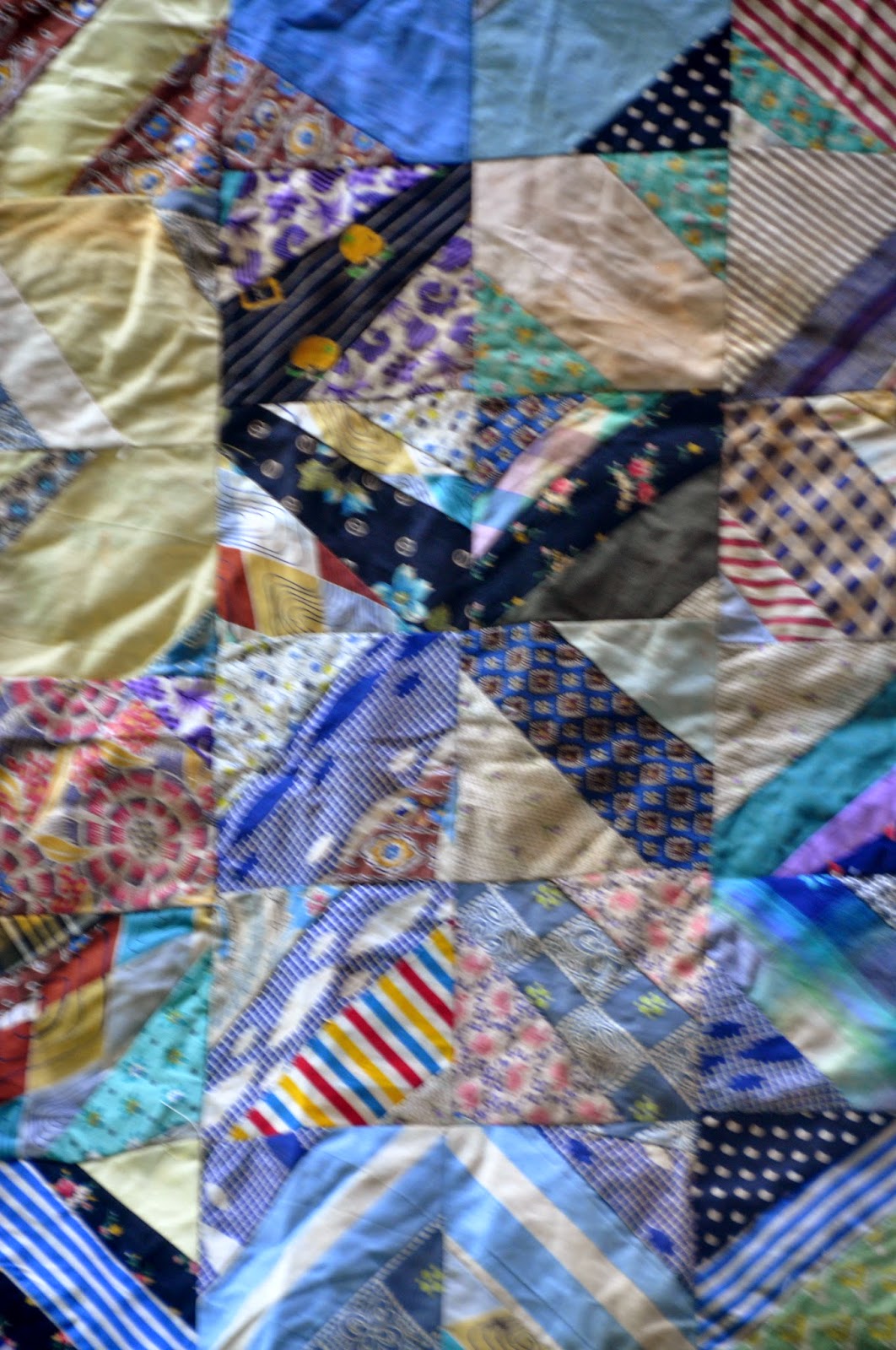 Then there was the other quilt top -- beautiful pinks and greens that make me think of the Twenties, carefully handstitched together . . . 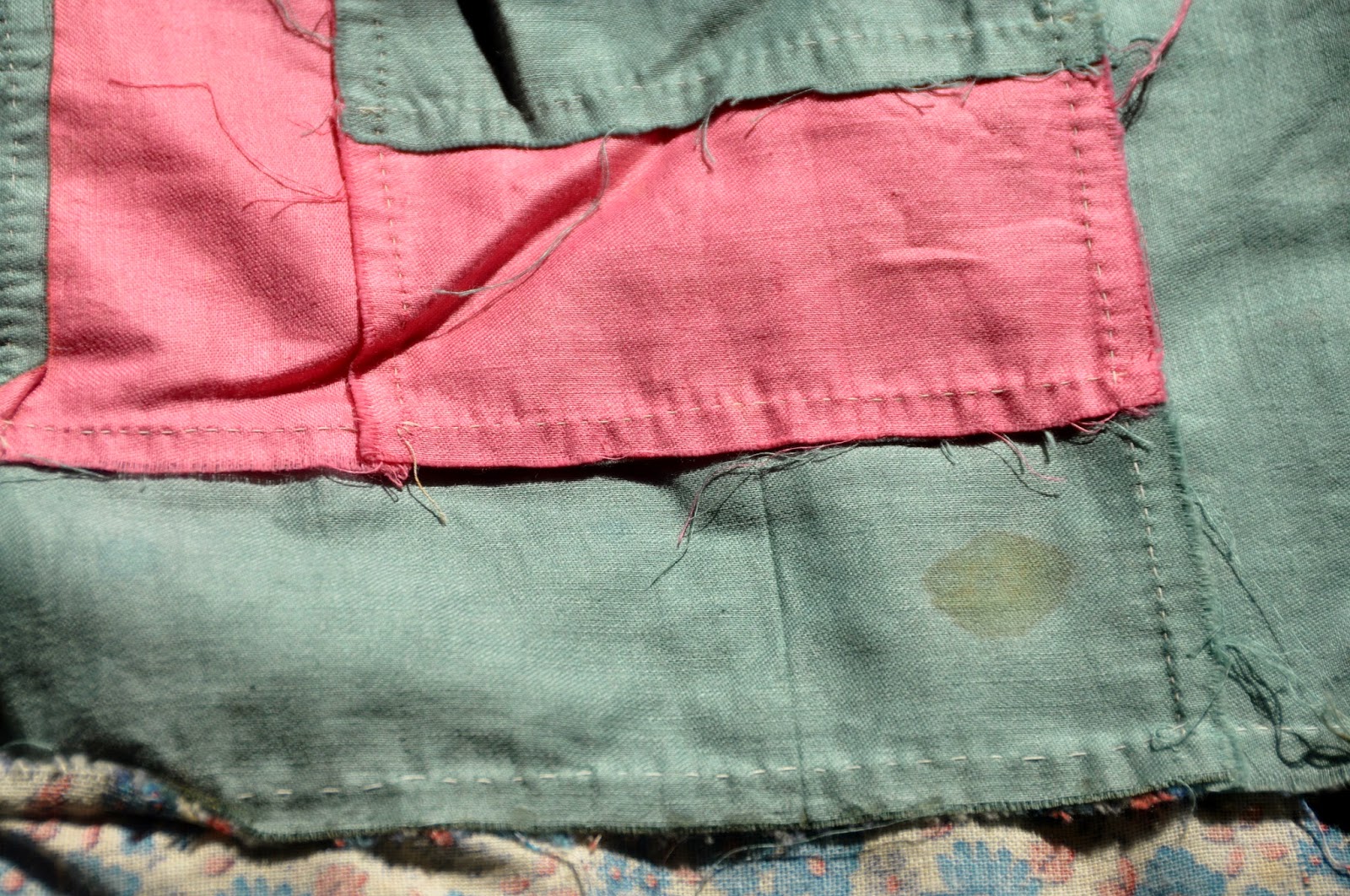 Lots of solids and some of what looks like feed sack material . . . Look at that sweet flowered pink , . . . swastika? 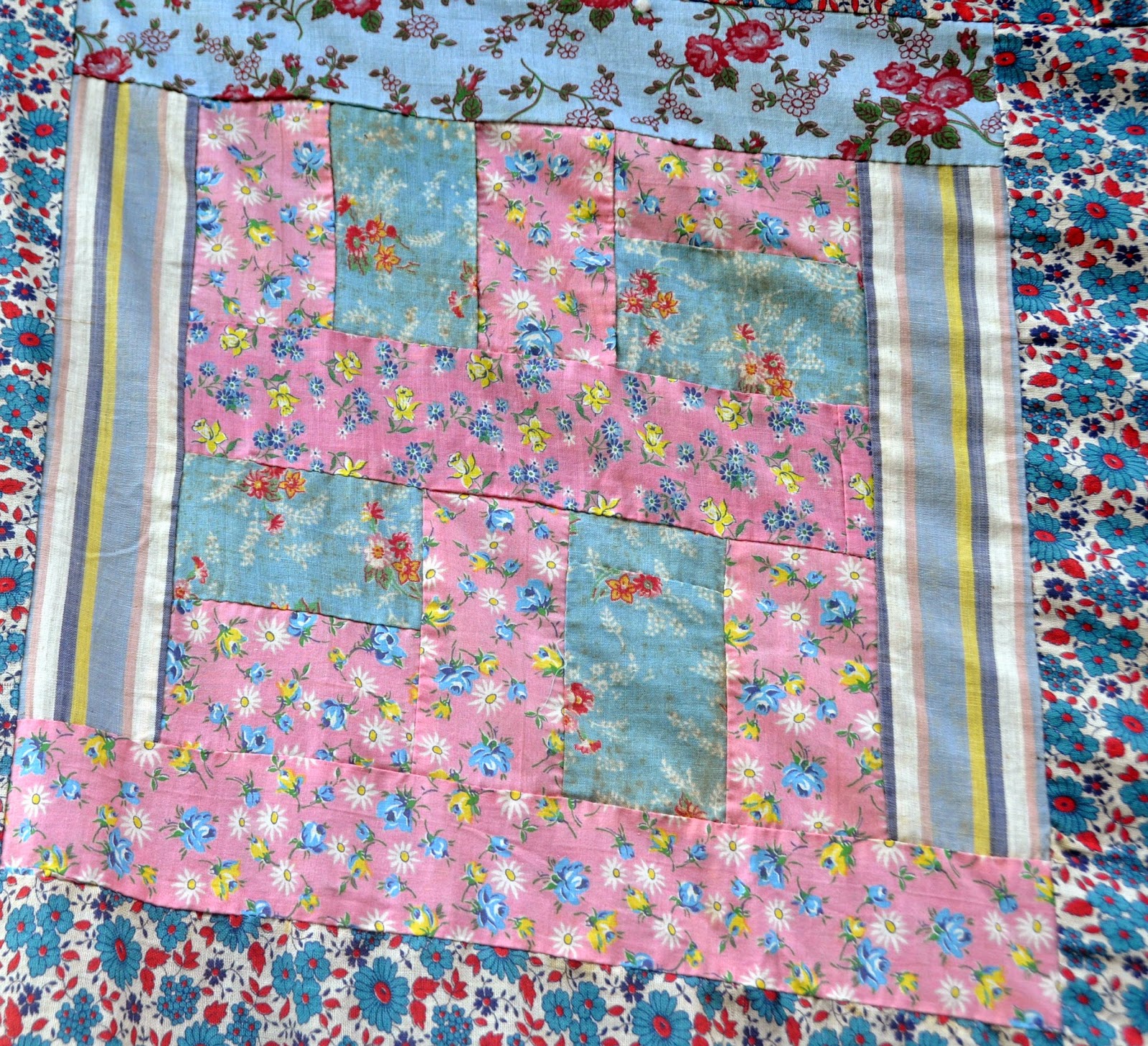 As it happens, the swastika was a widely used good luck symbol in many cultures and there are many examples of swastika quilts made before ever the Nazis adopted the symbol. I can just imagine someone beginning this quilt in the Twenties or Thirties and then sadly laying it aside rather than finishing.

HERE is the story of a similar quilt. 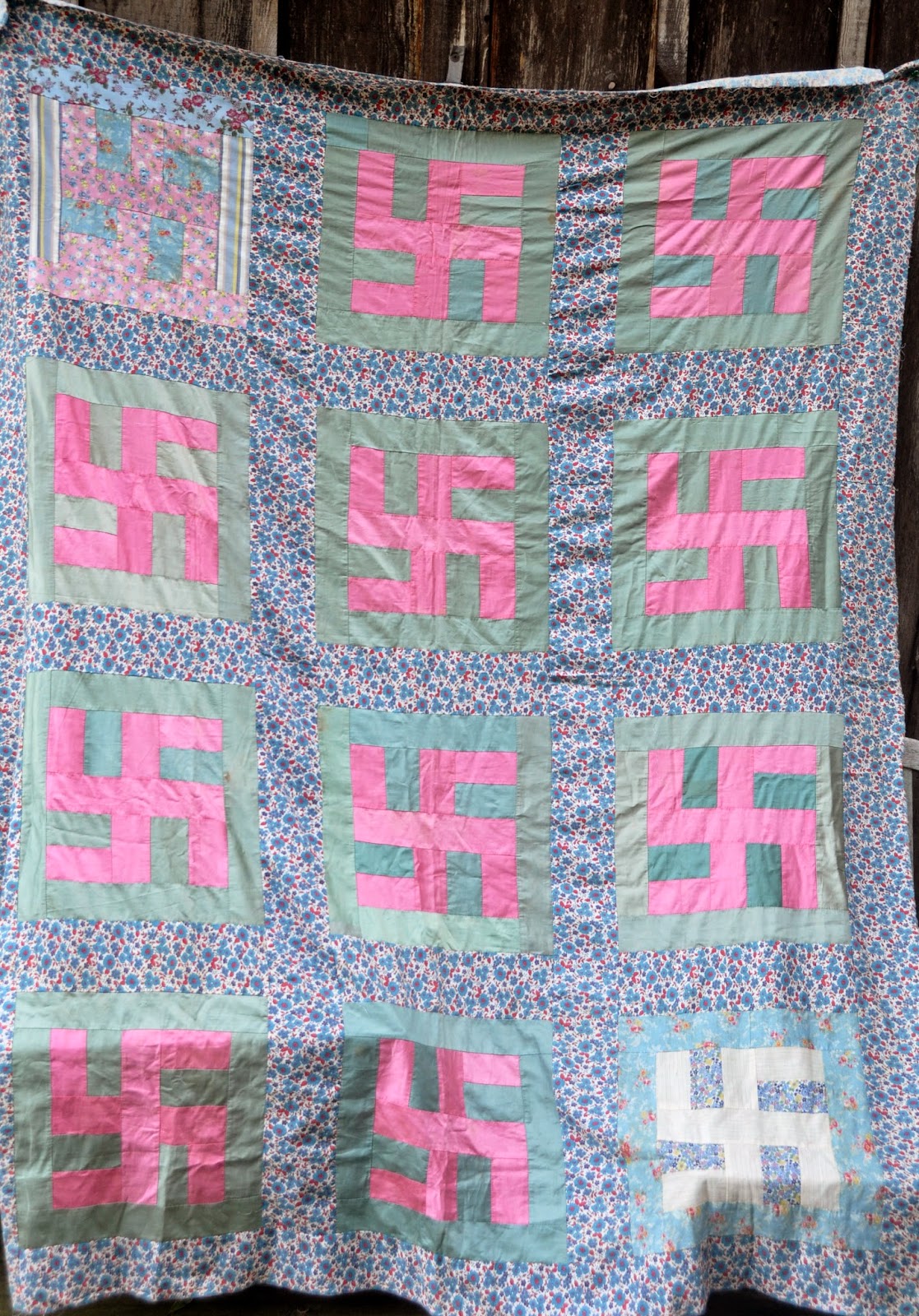 Those are some real treasures she entrusted you with! Lucky you!

what a cool quilt that first one is...and to have the stories with it...its cool....yikes on the second...yeah i imagine they lost the taste for it...

I wonder how many generations will pass before the running cross symbol could be purged from connecting with Nazism. Probably never. Gosh, the string quilt is a beauty!

Happy to have them in hands that appreciate the history and time put into them.

I'm so glad you are going to preserve the old newspapers. What fun to read about those days.

An old high school building in the Milwaukee suburbs had swastikas inlaid with tiles in one area. Lots of discussions about whether or not to remove the old icons and in 1991 the school board voted to remove them. A history lesson lost.

There must be hours of work in those. How lovely that they are still preserved and appreciated.

Vicki, it's grand that your teaching the workshop resulted in this unexpected windfall.

Having the vintage newspaper cuttings on the reverse of the first quilt really is a doubling of the gift. So much can be gleaned from looking through these squares. As newspapers themselves become more and more rare in this still new centtury, the very existence of the quilt's construction becomes even more valuable.

The Nazi's adoption of the classical swastika does have a long lasting reverberation. I doubt that this particular graphic shape will ever get rehabilitated.

What a lovely quilt, so full of variety and stories.

Like you Vicki, I love the idea of the newspaper backing. It would be a shame to remove it, but it won't wash, will it. Maybe one day, washable newspaper? There is so much history in a quilt isn't there!