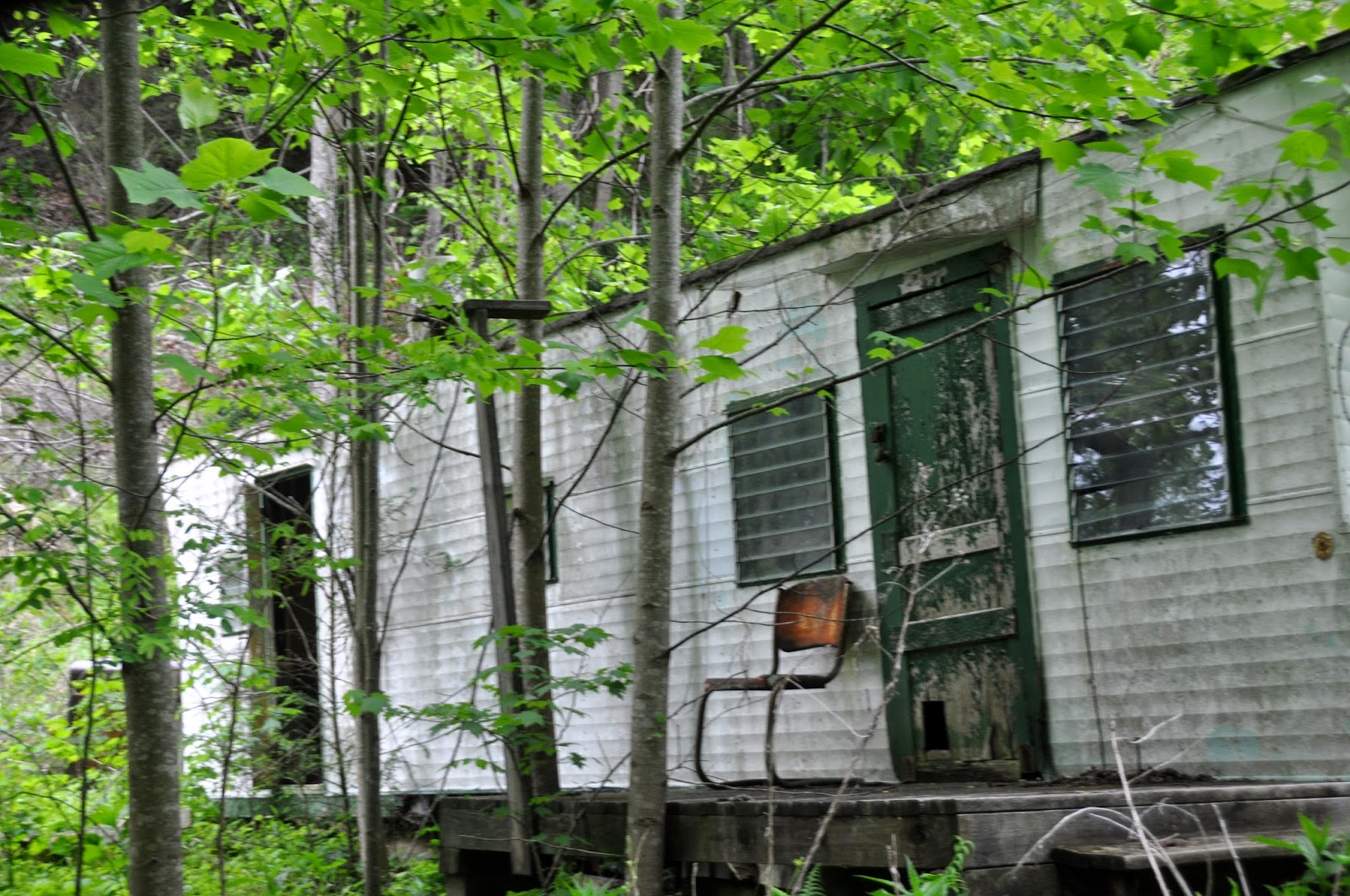 Law, will you look how things has growed up here. It must a dozen years -- maybe more --since I was up this way. Poor old Belvy -- I can see him now, setting in that chair, just watching his place go back to the wild.

He never did no good, after his Violet died. They had such a pretty house -- that's what's left of it up there -- the vines has near taken it.  Such a shame...

He could of stayed there -- but ever since the day he come in from the garden and found Violet on the kitchen floor, dead as a hammer, he said he couldn't bear to be in that house -- that he kept seeing her laying there. So he got him that house trailer and had them to set it there below the old place where he didn't have to see it.. 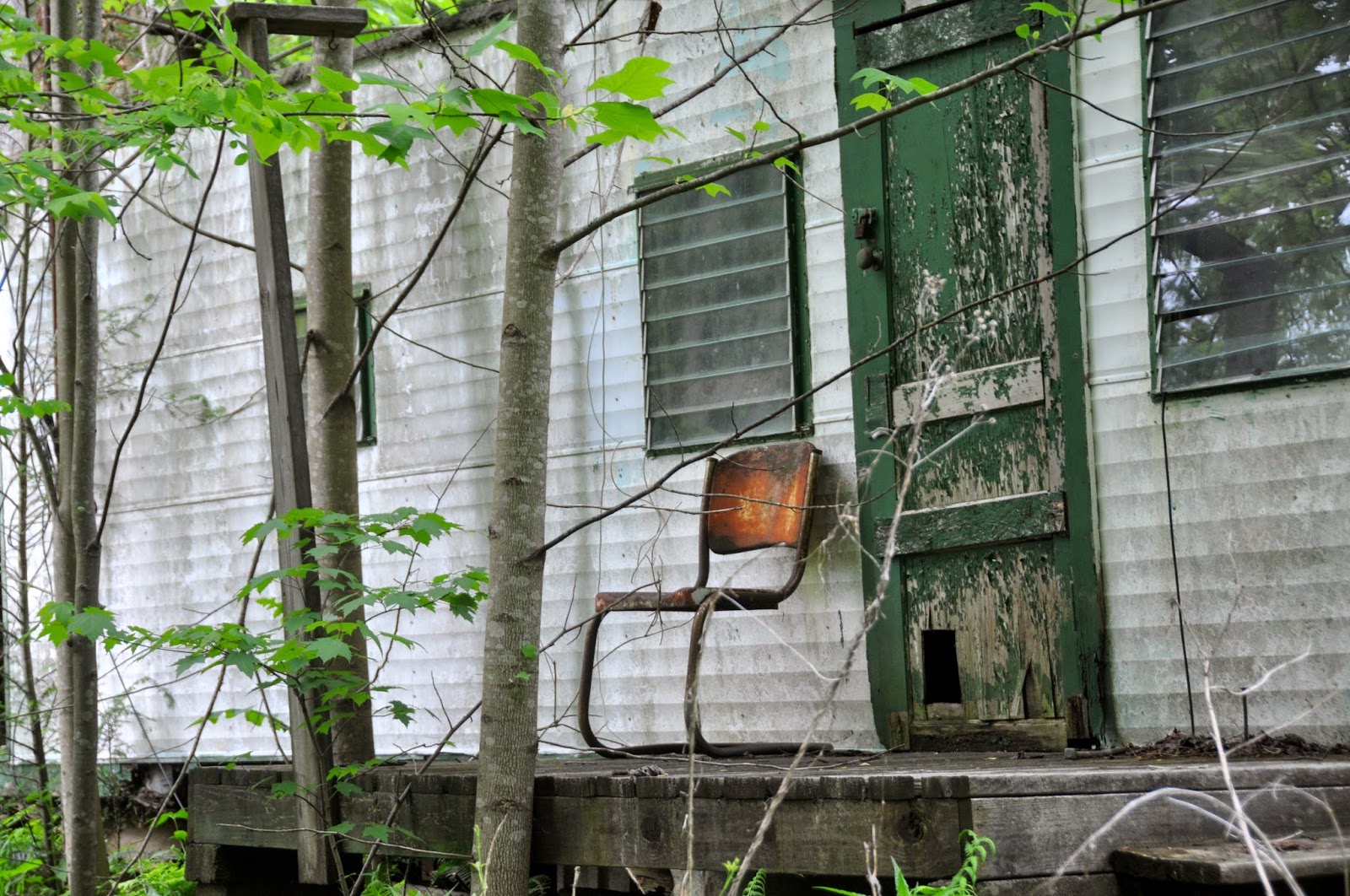 That hole in the door --  he cut that for his cat, Miss Priss. Now she was a pretty thing -- one of them long-haired yaller cats with the greenest eyes you ever did see. She showed up right after Belvy moved into the trailer and, though he'd never been one for cats, he was a fool for Miss Priss -- said she put him in mind of Violet -- she had yaller hair when she was young and green eyes too.

You'd see him setting there of an evening with that cat on his knee, and him talking to her like she was a person. She had right good sense, for a cat, and I reckon that if it weren't for Miss Priss, Belvy wouldn't have lasted out the year. But he had Miss Priss for company and, by all accounts, he seemed content. 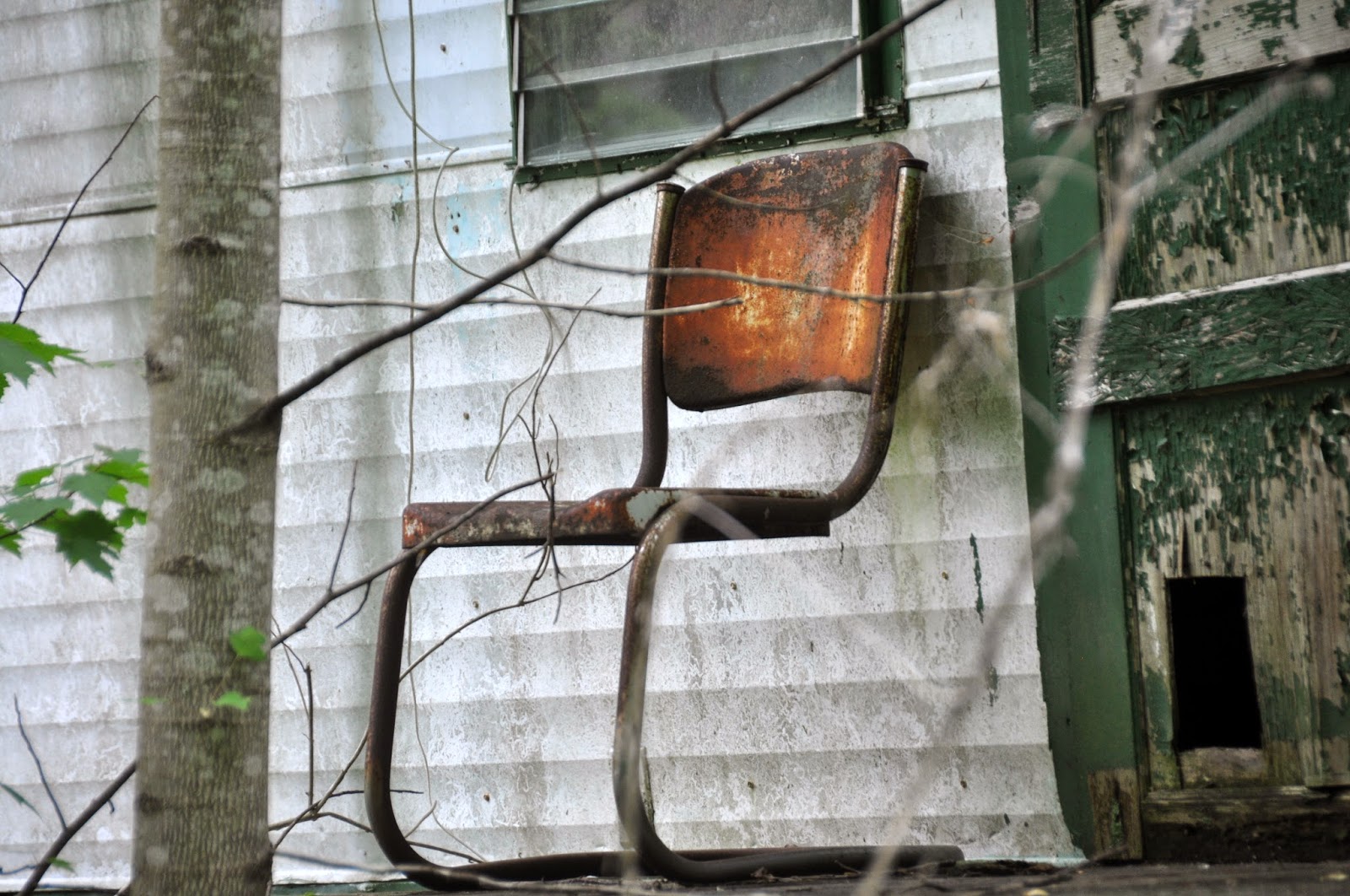 What? No, they're both long gone -- at least I reckon they both are. Belvy passed away about ten years ago. He had a heart condition, they said, and wasn't no one much surprised.

It was John Lee, his nearest neighbor, found him.  John Lee said he'd been on his way up the road, in a hurry to get home, but Miss Priss was setting on Belvy's porch chair, just yowling like one thing. He thought that was right queer and, not seeing Belvy about, he decided he'd best go see was anything the matter.

John Lee said that cat led him straight to the bedroom where poor old Belvy was laying stiff and cold -- but peaceful-like, John Lee said, as if he'd just slept away . . .

John Lee said the cat just watched, as solemn as a judge, when they come to take old Belvy away. He was aiming to catch her and take her home with him for his little girl but Miss Priss, she slipped off into the woods and wouldn't come, though he called and called.  He found a bag of cat food  and left some out for her, thinking he'd try to catch her another day.

And though he came back the next few days, he never saw her.  The cat food was gone but of course he didn't have no way of knowing if it was her or a rat or a possum that had eaten it. He worried that something might have gotten her -- a coyote or some such.

But she turned up one last time -- at Belvy's burying.  There's a little family graveyard on up the road where Violet had been laid to rest. And when they buried Belvy next to her, I was there. There  wasn't much of a turnout -- but we all of us saw that long-haired yaller cat, setting on Violet's gravestone and watching the whole service.

When Belvy had been lowered down and the hole had been filled, the cat was still setting there. Preacher called for one last prayer and we all bowed our heads. Just as I was about to close my eyes, I looked at Miss Priss and, you can call me a liar but that cat had bowed her head too.

She was gone when the prayer ended -- Preacher is right long-winded -- and no one ever saw her again. 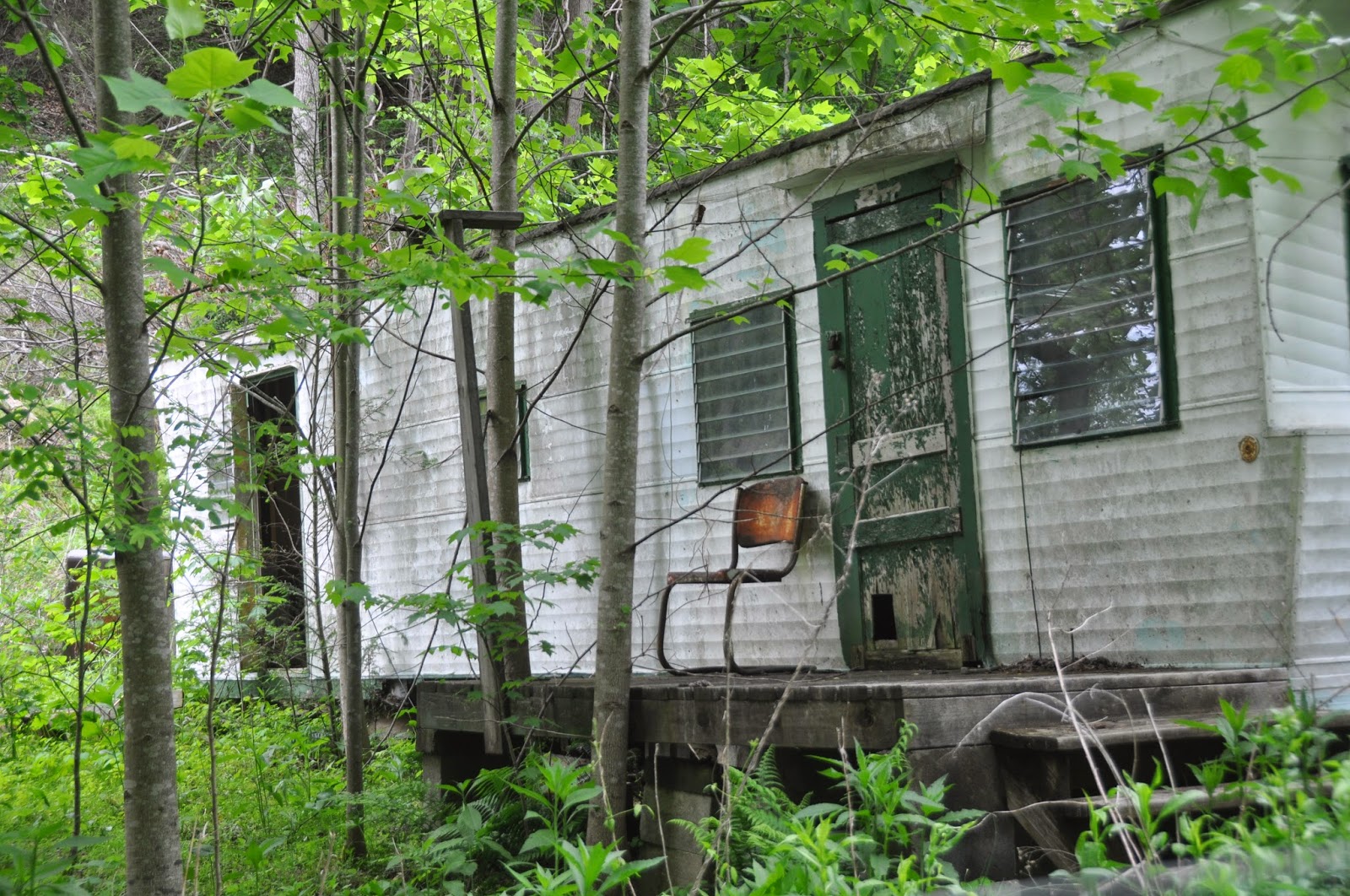 I always enjoy your stories, Vicky, long or short, in book form or here as a post.

So good to read another of your stories, but oh it makes me miss your books so much.

smiles...the cats know...i am sure her head was bowed...and her job done she went to find another....cool story v

Dear Vicki:
Love hearing (I didn't think this was reading, because of the voice you know) another story. When I mentioned, last weekend at the Tailgate Market, "knowing" you through your blog and books, my friend said, "I've got to read her books." Well, yes she does!

Well, Vicki, you are a very fine story teller. I could see every scene so clearly. Everything so natural, so real.

I'm not much for cats either, but when I come to visit here, I set those thoughts aside and become a believer.

Love it! I know you are working on a book already, but you should consider a collection of short stories, each accompanied by one of your wonderful photos.

Gwen, I'm certainly thinking about it -- a combination of these short shorts from the blog with some full length short stories I have. The photos are the problem -- I'd want to include them but they make a print book so expensive . . .

I really enjoyed this Vicki - as I enjoy everything you write.

Could you reference a website or your blog site for the related photos? That could keep down the cost of the book, but still provide the depth and richness of the photos for those who want to see them. Thanks for the story. As always, your characters ring true and, even a such a short story, have depth and unique individuality.

What a unique and folksy story about a relationship that could have easily happened. Enjoyed very much -- barbara

What a beautiful story! I always thought cats to be wise and very loyal.Great post!Thanks for visiting and your comment!

What a wonderful story!!! Thank you!

If I had a cat I would want her just like Miss Prissy. Beautifully done Vicki. Moving stories from the hills of home

Great story, Vicki. I totally disagree with the need for pictures in your short story book. (Ron Rash doesn't use them,and neither does Lee Smith.)

Your rich descriptions make their own pictures.

Thanks for the vote of confidence, NC mountainwoman, and for mentioning me in the same breath with two of my literary heroes. And , of course, Lynne's suggestion could be used. . .