Back on the Horse 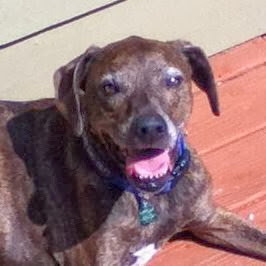 Christmas was tough for my older son and his wife.  They had to cancel their trip to the farm as their beloved Lyca had unresolvable issues with walking. After several visits to the vet, they said goodbye to the almost thirteen year old 'puppy' on the day after Christmas. (Ethan wrote movingly about Lyca HERE.) 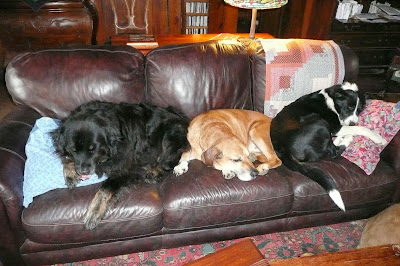 Lyca was one of the three dogs that shared Ethan and Aileen's  life during the time they lived here on the farm and she was also an honorary member of our 'Gang of Three' --  Bear, Maggie, and Jack, joining them on occasion for midnight prowls and groundhog hunts. I like to think they're all wagging and sniffing and greeting one another in the Hereafter. . .

But what makes me really happy is that, as Ethan put it, they chose to get right back on the horse and open their hearts to another dog . . . they found this cutie pit/terrier at a local shelter; she was spayed yesterday and went home with them in the afternoon. 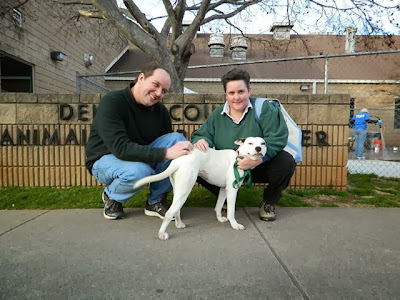 Tally -- short for Tallulah Winifred Vanilla Bean Ice Cream Cake -- has found her forever home with some of the best dog parents around. A new dog doesn't diminish the loss of Lyca-- but it sure makes it more bearable

As the bumper stickers say, Don't Postpone Joy!. It looks like Tally would agree. 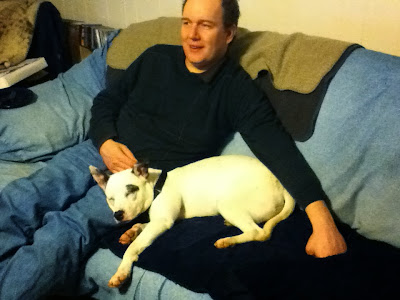 So pleased that your son and his wife 'got back on the horse' this way. Tally is one lucky dog.

i am so sorry on the loss of the pups....they are great friends and family members....glad they got a new one though...and what a name...ha...

I love stories about folks who adopt from a local shelter. I volunteer at the shelter here in Cocke County TN, cleaning cat cages on Sunday mornings with a couple of other lady volunteers. There are so many needy animals. Bless the hearts of your son and his wife for opening their hearts and home to Tally.

What a lovely story. My heart goes out to them for the loss of Lyca. We've been in their situation many times; it's heartbreaking and you think you won't recover. About that time a puppy enters your life and captures your heart and it looks like that is the adorable Tally. Lovely ending.
Sam

Always sad to lose a loved animal from our famlies, and to add another so soon is probably a good thing, mixed emotions. Tally looks like she will love to run!

I feel exactly the same way--kudos to your son and his wife. On Thanksgiving Day my beloved kitty Gipsy went missing. After having done all we can to search for her, we ended up adopting young Jack two weeks later. It's not the same animal but the new one helps heal the hole in your heart.

How sweet...Sorry for the loss of Lyca, but happy for the life that Tally is getting. She is a lucky girl.

I'm so sad for their loss, but how beautiful that they've already welcomed in a new family member. I've never had just one dog at a time, so cannot imagine moving through the grief of loss without another dog nurturing me and cuddling/kissing away the tears and heartache. Blessings to them and to everyone who knows the sadness of losing such dear furry friends.