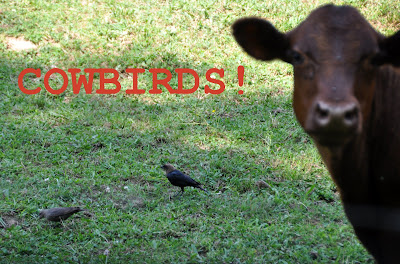 Like coyotes, cowbirds have spread beyond their original range and, like coyotes, they aren't always welcome.  Cowbirds used to follow bison, consuming insects the herds stirred up in their grazing. Now they follow cows. 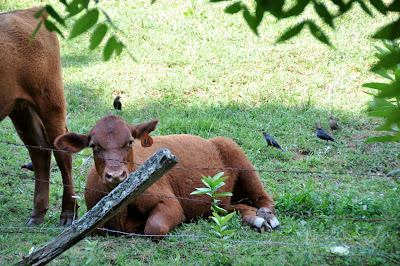 I think they're handsome birds, especially the brown-headed males/ 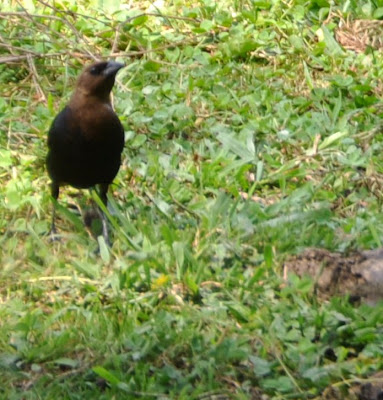 Like cuckoos, the females don't make their own nests; instead they find a nest that already contains eggs and lay their eggs (as many as seven) there. That's the end of motherhood for Ms. Cowbird -- she has a herd to follow.  But she will do this again and again and may produce more that three dozen eggs in a summer.

The original nest builder does the incubating. The cowbird eggs usually have a shorter incubation  time and hatch first. The hatchlings sometimes roll the other eggs out of the nest and snag all the food the poor host parents can provide. 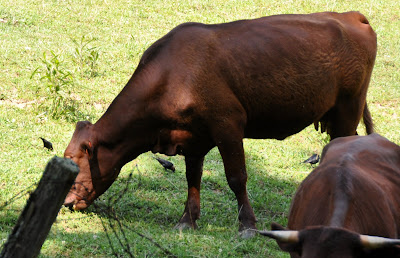 Not pretty behavior -- but a very successful survival strategy. 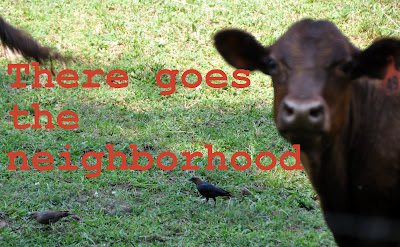 Well that's something else I've learnt. Never heard of Cowbirds before.

Lay their eggs in other birds nests? That's interesting. Wonder if the bird that incubates and feeds them, is shocked when they hatch? Ummm... who's yer daddy?

Villainous genius: The Cowbird.
I used to dislike them for the way they lived their lives, but we don't seem to have any shortage (during the correct seasons) of other birds, so it's all working out the way it should.

We have cow birds over here too, but I never knew their history. Very interesting and kind of strange.

Trust you to find the positive side of cowbirds. And to apply wonderful humor. Love it.

Do they help keep the insect population under control? Are the cows happy? I don't mean you, Vicki, but when we see what people have done to other species, it's hard to point a finger at cowbirds! I enjoyed your story.

Cowbirds do, indeed, eat lots of bugs. And the cows aren't bothered by them at all. I can't hate cowbirds for doing what they're meant to, any more than I can hate cats for killing things.

Still no regular service -- I have limited time on the hot spot so can't come blog visiting yet.

We started seeing cow birds here about two years ago. They also have an interesting call.

I agree- there goes the neighborhood :)

My daughter's high school biology paper was on cowbird parasitism. It sure makes them a lot less cute to look at when you know what they put other parent birds through, and how they threaten native song bird species. Their program seems to be working though, as their range keeps expanding. Nice to see them with some actual cows, though.

Those females are clever birds aren't they. What an unusual practice and one I've never heard of.
Sam

Just like cuckoos then! I'm sure the cows are glad of the birds. They make their lives a bit more pleasant, don't they.
Cuckoos seem to have been in decline over here lately.
Do you have another book on the horizon?

Have just found out it may be FRIDAY before we get our service back. And when they say Friday, they may mean Monday...

Alas, it's well below the horizon, Star...

Last evening we were overrun with huge groups of cowbirds. I have never seen anything like it before! If they weren't sitting on power lines or in trees, they were in the yard and noisier then heck, + that made the crows escape to the woods to voice their opinion about these visitors. Whew, what an evening!