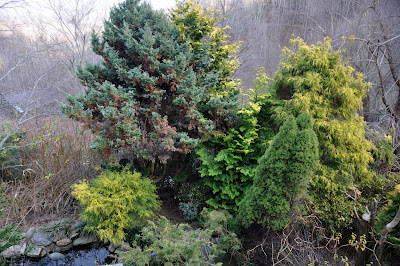 The so-called dwarf evergreens that I planted around our fish pool over twenty years ago have grown far taller than the word 'dwarf' had led me to expect. Evidently dwarf means 20 feet as opposed to 40. 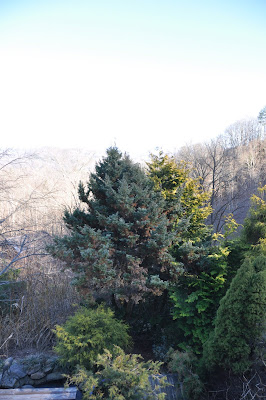 I love these plants but they have been blocking our view for too long. Our good friend, Doc Adams, got the ball rolling by volunteering himself for a spot of chainsawing. John and Justin assembled the implements of destruction and the guys went at it while I stood around pointing at things I thought needed cutting back. 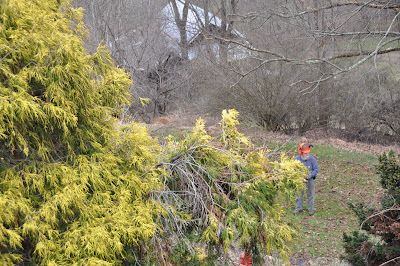 John dragged numerous huge piles of branches to to a field to pile up for later burning. 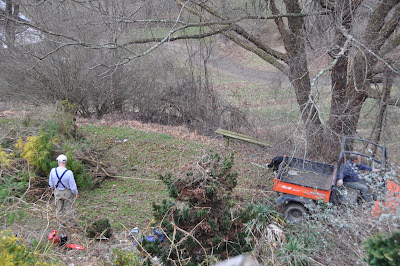 As the day went on and the area began to open up, I grew bolder -- "Oh, just take that juniper down to give the azalea and the Hinoki Cypress more room." 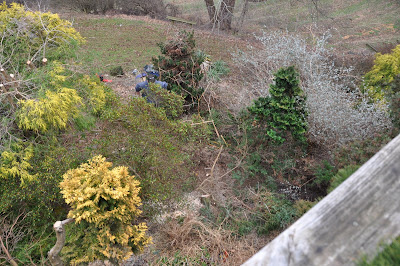 Tough love in the garden. 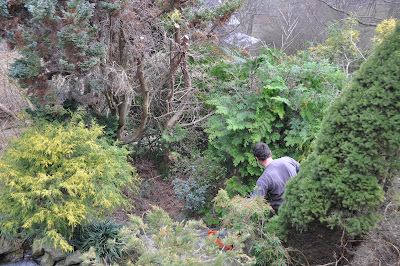 It looks like a war zone now but I have faith that it will be an improvement. By summer, most of the evidence of this destruction will be covered in new growth. 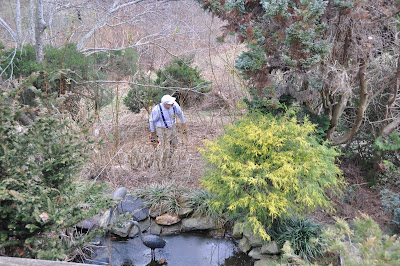 Maybe it's the New Year -- but it feels so good to be making long overdue changes. 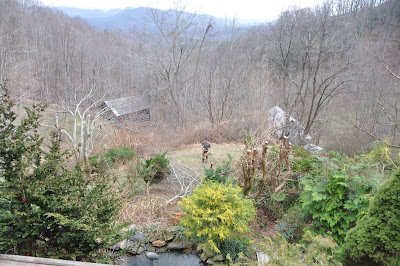 Pruning here, pruning there . . .kind of a life lesson, I'd say. 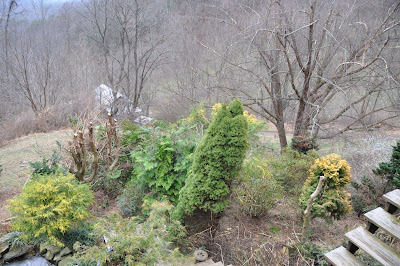 I have such a hard time cutting anything that manages to grow around here, except the grass. I bet that will look great come spring.

Of course , both the azalea and the cypress will now feel free to take over .....

Wow, what a difference. You sure made the right decisions with your tough love in the garden!

pruning is a life lesson for sure...love all your green...

I did a lot of that last year and didn't regret it when I saw all the new growth coming through without all the old wood. It has to be done. In the garden as in life, you are right about that!

I'm forever trying to prune things back in my life, and it always feels good!

Perfect analogy. For me cutting down a tree is as hard as tackling changes in my life.
I especially like your comment on giving other plants more of a chance by making the changes.
What could I give a better chance if I made some hard changes.

Isn't it funny how, once you get started, and you realize that cutting a little bit isn't so painful as you expected, you go further and further until you have An Aftermath?
But you're right. It will all fill in and you'll be so happy you did this!
How lucky that you have all that help!

Kuddos to lioness Vicki, a very courageous decision and the fish will love more light as well!

how funny- 20 instead of 40 feet!!! i think you took the right decision. thank your for your good wishes which i gladly return. all the best, good health, happiness and success for you and your family! thank your for being such an faithful reader! cheers from far away ireland! eliane

I agree with you 100%--changes are good! Beautiful green for this time of year.

such a beautiful and peaceful place to look at! I think its always an hard choice to cut trees isn't it? We get used to see all their branches and yet we know that, sooner or later, we'll have to do something about them growing "too much" or disturbing paths...

Everything ready for a beautiful Spring! Please do NOT forget to post photos of them when it arrives.

We need a good pruning around here too, just keep putting it off. Your place will look great this spring!

So good you can do this! My husband can, but I can't...left to myself I would probably end up buried in an overgrown, tangled thicket. Well...not out here where we've moved but other places! LOL

in case you were wondering why i bought those many things (8 pillows!!!) and spent a small fortune: in the translation i had forgotten to mention that all those goodies are for the decoration and refurbishment of our future guesthouse.

I had to grin cuz hubby has so much trouble with pruning. If it is living, it should be allow to - or something like that. Cutting a tree down is like cutting an arm off for him. Dozing some trees for a pond last year was a heart wrenching decision!

You are going to love your new view and the sights of your revived plants!

I have the hardest time pruning plants and trees. I usually end up doing what needs to be done, but, oh, how I agonize over it!

Once I get up the courage to prune areas of my life that need it-I'm always happier : )

Funny how this time of year encourages pruning in one way or another. I finally tidied up my study - hooray! And the wind blew over a big mat of ivy that was climbing over the old wall in my yard. It tore away all the suckers, so I had to spend ages cutting that back as it wouldn't 'stick' back where it had been.