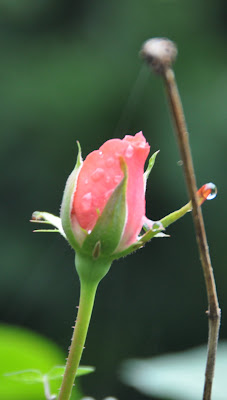 After hearing it recommended time and again and after seeing one of the characters on Downton Abbey receive a copy, I decided it was time for me to explore Elizabeth and Her German Garden. Published in 1898 and written by Elizabeth von Arnim, an Australian woman married to a German nobleman, this book had huge popularity in its day and the author went on to write many more, including Enchanted April. 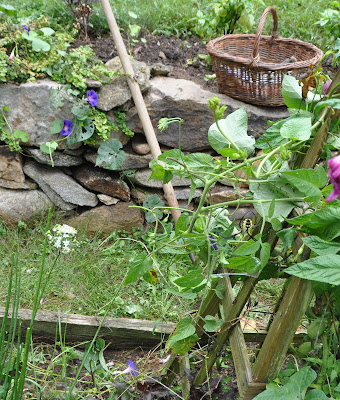 I wasn't sure at first -- in the beginnning this semi-autographical book struck me as little more than the grumblings of a wealthy woman who doesn't seem to like anyone very much.  But I went on, captured by the descriptions of her garden -- her plans for it and her very real eye for beauty. 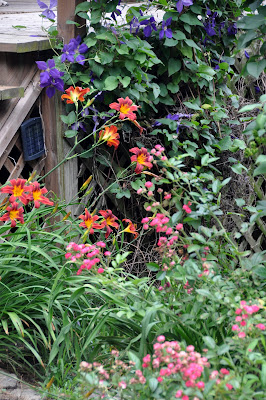 And as I continued, I began to appreciate the protagonist's rebel spirit, feminist outlook, and, most of all, her dry wit. Left alone with uncongenial house guests, Elizabeth laments:
"My husband goes off after breakfast to look at his crops, he says, and I am left at their mercy. I wish I had crops to go and look at -- I should be grateful even for one, and would look at it from morning to night, and quite stare it out of countenance, sooner than stay home and have the truth told me by enigmatic aunts. . ."
I'm hooked. I downloaded six of von Arnim's novels on my Kindle (for a pittance as they're out of copyright) and am half way through The Solitary Summer.  Terrific January reading! 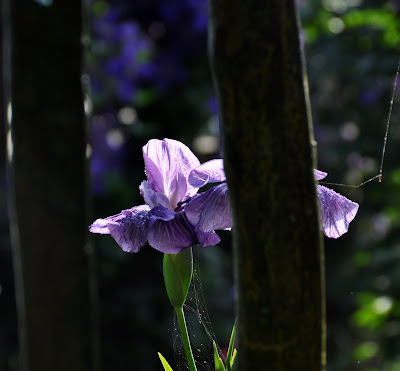 Love the spider web on the last photo!

Ah, those books in the public domain. Since Christmas, I've been browsing the shelves myself. Glad you found some gems, Vicki.

Just out of interest, what do you make of the recent remarks made by Simon Schama?

hmm...have not heard of there...as to downtown abbey never seen it but heard quite a bit on it of late...worth the watch?

Martin -- I think, had I been the creator of DA, I'd be muttering to myself, "I didn't expect a kind of Spanish Inquisition."

This is Fiction, for goodness sake! Not unlike our own GONE WITH THE WIND that paints an somewhat gilded picture of the American South. Or American wrestling -- we watch for entertainment, not for TRUTH.

I LOVE Downton Abbey -- I want Maggie Smith to keep on playing or overplaying the Dowager to her heart's content.

Brian, that should answer your question.

Haha...that passage made me laugh out loud. I've had houseguests like that, too! As I read it, I could imagine her saying it---her spirit really comes through.

Sounds interesting. Re Downton Abbey, I agree with you. Maggie Smith is brilliant as the dowager. That's going to be my next look! I love the clothes, their colours and intricacies and I must have one of those canes. I bought one for my son for his birthday last year. He was delighted with it.

I love Downton Abbey, too! In case you'd like to know the man who created the series, Julian Fellows, a little better, he's one of the supporting characters of another BBC series, Monarch of the Glen, which is available streaming from Netflix or DVD. It's got the same great production values we know and love from BBC ("Look at that garden!" "Wow, what a magnificent pile of bricks!"), but it isn't quite as good in plot or characters as Downton Abbey.
Deana the Queena

I love Downton Abbey, too! In case you'd like to know the man who created the series, Julian Fellows, a little better, he's one of the supporting characters of another BBC series, Monarch of the Glen, which is available streaming from Netflix or DVD. It's got the same great production values we know and love from BBC ("Look at that garden!" "Wow, what a magnificent pile of bricks!"), but it isn't quite as good in plot or characters as Downton Abbey.
Deana the Queena

I'll have to check these out. I am enjoying the lower priced books and freebies- have found a couple of real gems, but the weeding process is a bit tedious.

[adds Downton Abbey to the Netflix queue] [clicks on the "Download" for Elizabeth and her German Garden (almost wrote "Secret Garden" ...)]

You, Vicki, are such a pusher ... [grin] But, thank you. So much of your taste in books overlaps mine that I'm always happy when you rejoice here in a new discovery. I definitely found much of interest in Woodall's It's Not My Mountain Anymore, for example -- and much to mourn.

Thanks for the heads-up. I just downloaded several of them for less than a pittance...they were free.

Oooo...I like the snippet. I'm going to have to check that out.