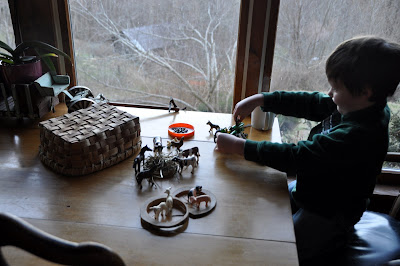 Yesterday our nephew Drew and his little boy came over. The last time they were here, Jack had  fun playing with a toy cow and some hippopotami. They had hay to eat and there was poop (coffee beans) to clean up. 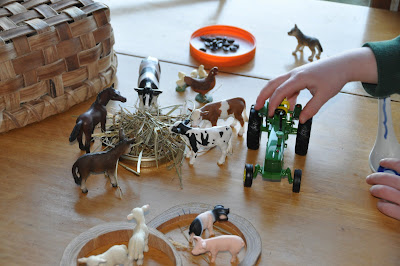 So I went to Tractor Supply and got a little tractor and some farm animals to surprise him the next time he was here. 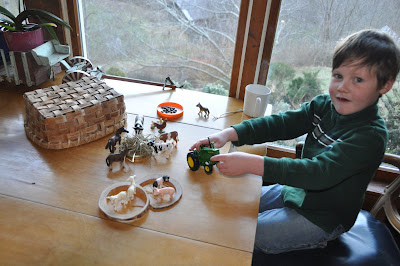 Jack drove the tractor and herded the animals and shoveled the poop. Then he took a snack break while Ali Ali and Willa watched with interest. 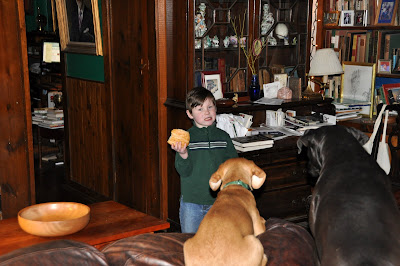 Mean while, Jack's dad Andrew and Justin were busy, searching through the cubby holes for toys from their own childhood. They discovered a major treasure trove of GI Joe action figures from the 80's. 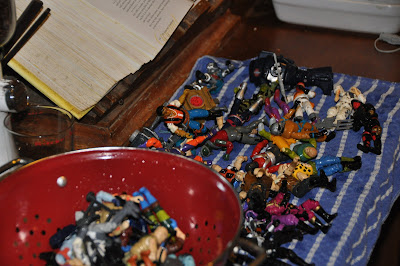 Justin spent a good bit of time explaining to Jack which were the good guys and which were bad. 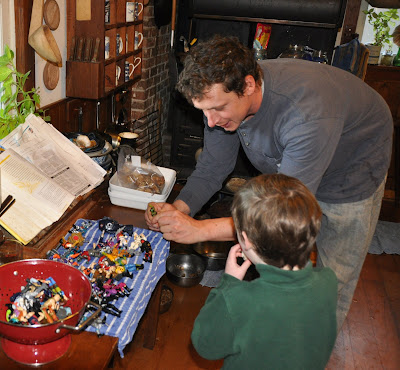 Uh oh! The bad guys have invaded the peaceful farm! 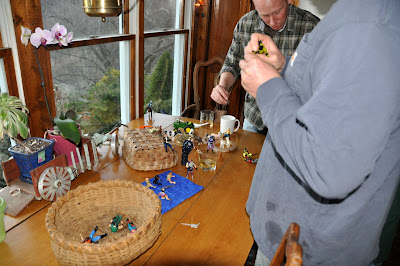 The big boys are working out a scenario . . . 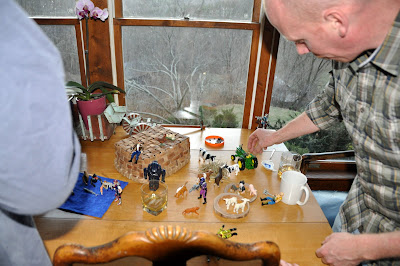 The blue napkin is a pond -- the perfect thing to do with the action figures who'd lost their legs. 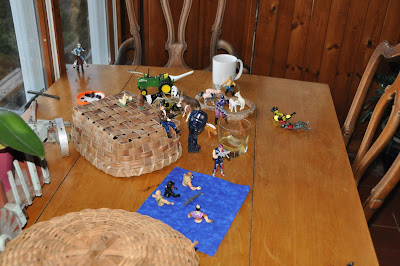 Look like they're wading in deep water, don't they? 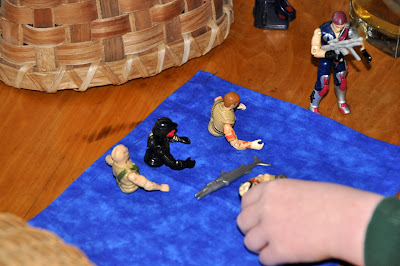 I'm not sure why the fellow in pink is guarding the poop... 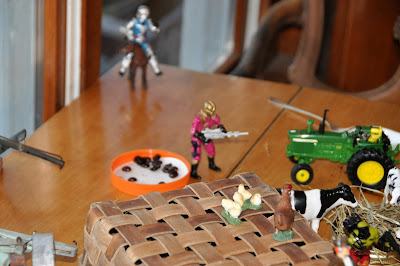 But undoubtedly the strategists know. 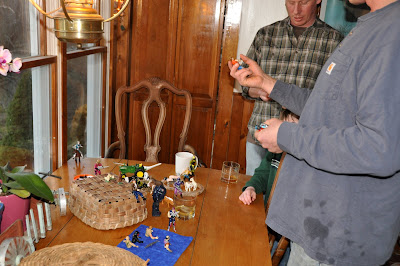 Note the cup of milk and the two glasses of Scotch in the midst of the action. . . 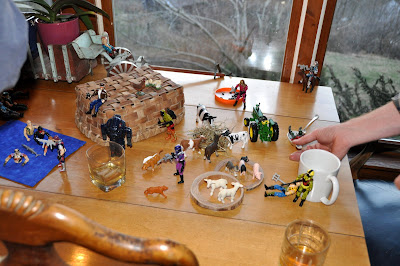 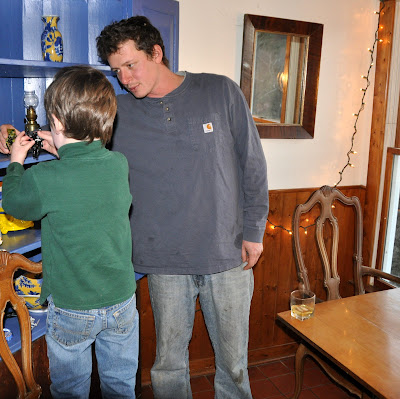 Meanwhile, I was in the kitchen photographing more action figures. 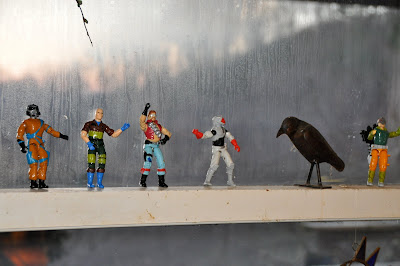 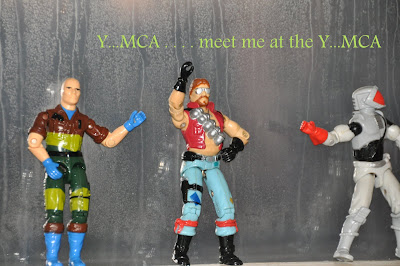 Brilliant, Vicki... I love the ending!

"I'm not sure why the fellow in pink is guarding the poop!"
You never know these days...
Excellent post Vicki! I am sure everyone had a perfect time at your house this weekend!

Great fun, Vicki. The only downside being, you've planted that YMCA tune in my head now. It's bound to be there all day.

The little boy remains...no matter the biological age!!!! I bet the big boys were as involved as the little boy!!! Love it Vicki.
Just about to hit publish and saw Martin's comment and realised I am sitting here singing at the top of my voice!!!!!!!

What fun all the 'boys' seemed to have, but the last picture/caption is priceless! I love it!

Love it!!!!! What fun you all had! And yes! Even the YMCA is wending its way through my somewhat sill-sleepy brain! Have a wonderful day!! Cathy

Oh, that's funny and cute.
They're all eight years old...

haha this is awesome...so cool that everyone got in on the fun...guarding the poop lol

My my, I was rolling on the floor! Memories of those GI Joes, but they weren't around for my grands...so we had Legos all over the place. You are the story mistress once again!

I didn't get the last picture till I read the comments. I'm happy to say I've never heard the song, so it's not stuck in my head. I enjoyed the pictures and stories.

What a fun post! The photos and captions are great. My favorite thing about these photos is that there isn't a cell phone, smartphone, or iTouch in sight...

Your son Justin is hunky.

Yeah, I'm stuck with the YMCA (old song by The Village People) myself.

Helen - A laugh out loud moment (more than one of my friends have said that.)

What's this? A kid playing with...toys instead of something electronic??? Huh... Too funny about the 'big boys' getting in on action. I'm sure they were just 'helping'.... I had oodles and gobs of plastic farm animals, (broken legs and all) and spent hours and hours in the floor playing farm. The YMCA tune..that one tensed me up! ha. We were forced to learn a jump rope routine in gym class(For public performance) to that tune and it was a nightmare for us less graceful gals.
Enjoyed the post! (And just got started on Under the Skin!)
Tammy

ROTFLOL! My biggest laugh was at the pond-wading figurines, though...I love the imagination!

Fabulous. I remember taking the little green Marine figures (I was a Marine brat so they couldn't possibly have been army guys.) outside and playing in the cracked earth of parched southern CA, backyard at Camp Pendleton. A shallow crack in the earth became a canyon. No farm animals. But what a world of imagination.

What a dream visit for a boy! And I had farm animals like that when I was a kid. I had forgotten all about them. They didn't poop though. Great post, Vicki, I enjoyed it a lot.

That's such fun. I am reminded of the plastic farm animals I once got in Kelloggs Cornflakes packets. I loved them. I shall have YMCA in my head too - it was played on TV tonight as well!

I think the grown ups enjoyed that as much as Drew did. That looks like my kind of afternoon. My three little boys used to play like that - happy days.
Must start collecting diddies for Dylan.

What a feel good post! Thanks a lot because I really needed something to boost up my mood this evening. I especially love the cup of milk alongside two glasses of Scotch.

BTW: You are definitely a five-star great aunt...getting those animals and tractor.

Fun times- boys will be boys- they never really grow up. It's kind of like my husband's ability to always know football stats when I know he hasn't watched a game. He says it's a "man" thing. HA!

Great pics! Love the guys wading through the pond. This reminds me why I have all those boxes of action figures, army men, and Legos in my attic. My two-year-old grandson is in for a treat. He saw a small Legos Star Wars set in a check-out line recently, and since his dad still has his Lego X-wing fighter on his dresser, he wanted to get it for his daddy so they could make it together. Warmed his father's heart.