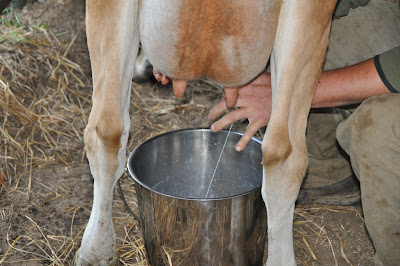 Q: You're always talking about how much you've learned from your editor -- can you give us an example?
A: Oh, yes! One of my favorites is 'Milk it!' (This week's assignment in my writing class, as a matter of fact.)
I first saw this comment on the edit of  Signs in the Blood.  My protagonist Elizabeth was in a scary situation and needed to stop her car and get out. So that's what she did -- in about two sentences.

In the margin, Herself  penciled "Milk it!" meaning that I should wring every last ounce of tension possible from the scene. So there were sweaty palms and fumbling with seatbelt latch, yadda, yadda, till the escape had been effected -- maybe two pages later.
Here's a hypothetical example of a moment of high tensions being prolonged.  Suppose you have a character who is running away from someone, don't just write "She ran along the road and flagged down a passing car with friendly people who who gave her a ride home."

Too short for tension to build - it's over before it's begun.

Instead, in this scene, the character should run, slip and fall, get up, run some more -- always aware to the footsteps growing ever closer. She should try to flag down a car only to have it zoom past her; she should keep running, slowing because of being out of breath or a stone in her shoe or something.

This could go on for quite a bit (I'm sure you  could think of more stumbling blocks in her path) before the friendly car comes along. When it does, it could slow and she would think she was saved.

Then it could speed back up and go on. And she would despair. Then at last, she could see its brake lights go on and it would back up and the driver would ask if she wanted a ride.
That's milking it! 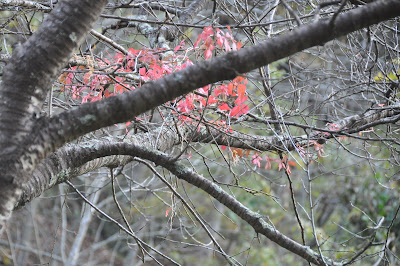 Good lesson here! And on this ONE FAQ your answer nearly filled a gallon bucket!! :) (And good example)

I really like these FAQs, Vicki. Not least, because the answers are coming from someone who has been there and done it.

My Grandmother loved to write. One of her great disappointments was, her inability to be concise. I guess people should draw the distinction between stretching, to milk the tension, and waffling. That's something I find myself doing, if I don't take care. For some writers, the word count can become more important than what they're actually saying.

You are very kind to share this lesson with everyone Vicki. Have a great week......:-) Hugs

The tension mounts till it's unbearable. Sometimes the suspence is too much when I see these situations on TV!! I remember that my son always left the room when Dr Who was on, and said: "I come back when I see the "white letters"( he meant the credit titles)". He was then still very young.

nice. yes. i agree with this. smart editor...

and star is cracking me up

Thanks for the tip Vicki. And the pic to accompany it.

The key, of course, is to milk the moments of tension and condense the tedious bits. Sometimes I find myself tracking every moment of a character's day when there's nothing exciting happening. One has to learn not to document the toothbrushing (unless the villain has put poison in the toothpaste) and the bed making (unless there's a cobra or perhaps an unexplained bit of lingerie beneath the covers.)

My older son (when young) watched the scary bits peeking around the corner from another room, Wil!

Nice post! I was laughing a bit though because when I saw your picture I thought that you may be making cheese. I see that I am the oddball. I thoroughly enjoyed the lesson in milking it.

it always comes down to sex doesn't it

I watch the scary parts through the crocheted holes of a treasured afghan that I keep on the back of the sofa! I will skip ahead in reading a scary part to see who survived it! Then go back and read the not-so-scary-now part! If it's mayhem and violence I can do without, I skip it altogether, not wanting to keep my husband up at night during my vocalizing nightmares! (Seriously!)

Thanks Vicki for the wonderful lessons!

A term I am familiar with but used in a different social context i.e. milking them for all they are worth -- barbara

FANTASTIC,
I started sweating just reading about how to milk that dangerous situation! ;-)

some writers vicki are good at it, and others well ----- not so much ... this is a hard concept to get down as a writer when to wrap it up. the other day I was reading a peeps short essay and they managed to describe a person in seven brief words, and it is was a Wow factor, but others go on on,

So in your writing class if you can teach this very tough concept -- you are one marvelous instructor, for some writers like yourself I believe it comes about naturally.

Right, Joanny -- there are times to be concise as well as times to go on... and the secret is knowing which time and how much is too mush and how little is too little...

My kids were always great at "milking it" when they got hurt. High drama would unfold with many tears and accusations before a small scrape would be revealed. We can always learn from kids.

Thanks for the FAQ. It is one I will remember.