Here, Where I Was 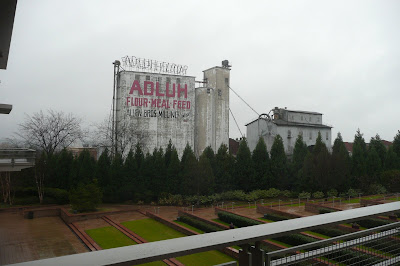 Yesterday, in Columbia, SC, it rained, almost all day long. But inside the convention center (from which I took this picture of a historic old mill) it was warm and dry and I was part of a panel of mystery writers.

From left to right, they were:

Mignon Ballard, who writes (among other things) the Augusta Goodnight series, about a guardian angel; Hark the Herald Angel Screamed is her latest.

Fran Rizer, whose protagonist, Callie (short for Calamine Lotion --her daddy thought the pink tie-in suiting for a baby girl -- and besides, he was drunk ) Callie, I say, Parrish is a cosmetician -- at a mortuary. Would you be surprised to hear that Casket Case is the name of Fran's current book? 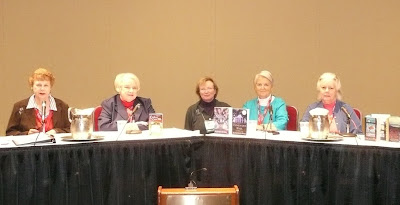 Cathy Pickens, our able (and very funny) moderator, writes the Avery Andrews Southern Fried Mysteries (and introduced me to Confederate Fried -AKA chicken fried - steak at the end of the day when I went with her and her husband and another writer to a little place she used to frequent when she was in law school. Cathy says she's been coming to this restaurant for twenty-five years and has never been able to order anything but the Confederate Fried Steak -- it's that good. And it is, too, with a peppery milk gravy that is the stuff of legend.)

But I digress. Cathy's latest is Can't Never Tell.

And then there's Vicki. Among all these nice ladies, it turned out that I was the one on the dark side, in the dark corners -- at least, according to some of the audience members. One lady said she got scared sometimes, reading my stuff. And when it turned out that everyone else on the panel preferred to do their writing in the morning, while I do my best work after 9 PM -- well, there were knowing nods and someone mentioned vampires.

A group that includes both you and Kathryn Wall has to be good -- I'm going to have to check out the books by those other women!

Vicki....sounds like you had a wonderful time. I know you were in your element and "luv'n it"!I used to love to go to the Southern Books Festival and hear all the Authors talk about their books. And....some of us like the dark side!

I'm looking into those Kathryn Wall books - I love a Low Country setting.

I'm glad you had a great time, and hope you arrive home safely - looks like we're about to be snowed in again!

Do tell. What was the name of the chicken-fried steak restaurant? Hmm, that reminds me, I'm starving. Must be time for lunch.

Auntie K-- I've read and enjoyed Cathy and Kathy's books -- have not yet read Fran or Mignon's.

Carol -- this was one of the best, possibly THE best, organized festival I've ever been to -- really, really nice. I was sorry to have to leave and miss Sunday's events (they were having some really nice 'brunch with an author' things going on as I left the hotel this morning) but here I am now in Troy, NC where they've put me up in a veritable MANSION, getting ready to go try to give them their money's worth at the library.

Phyllis -- I talked to John and heard it was snowing at home. I'll be proceeding cautiously tomorrow -- hoping that the roads are clear. If not, I'll find a place and hole up until they are.

Marta -- the restaurant is named Yesterdays and is evidently a much loved institution.