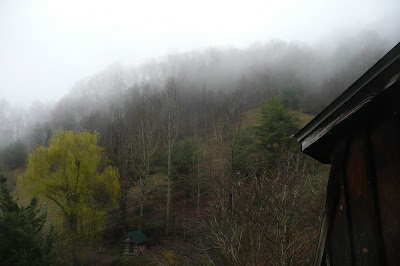 It's been beautifully rainy for several days now and, while I'm making real progress with the revision of Miss Birdie's book, I was forced to spend yesterday gathering and recording tax information, a task that I always manage to put off till the last minute.

I'm not talking about actually doing the taxes -- just getting things organized so the tax preparer doesn't seize up when she sees the stuff. Between the farm and depreciation schedules and a rental property and my alleged writing career with deductions for travel to conferences and printer ink and membership in professional organizations . . . well, it's way too much to expect of an English major.

I prepared for the ordeal with a hearty breakfast -- John made that gorgeous bread and I'll be sharing the recipe soon. 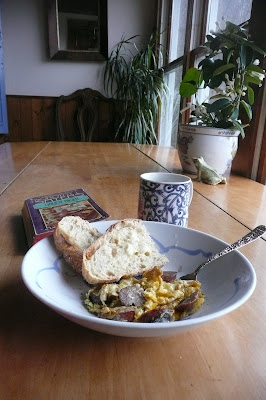 I didn't quite finish -- that will happen today. But once more I told myself that this year, I'll do better and have a tidy way of recording things -- better than a wad of cash register slips and illegible scribbled notes -- rnd trp Albemarle followed by an illegible number that may be mileage or amount spent on gas. 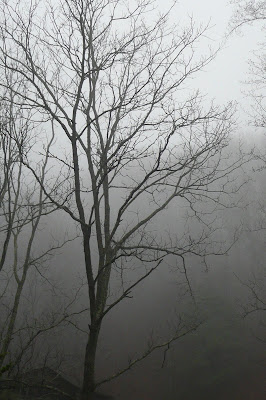 I'm better organized than in years past -- just look at all those envelopes with things like TAXES and CHARITY and FARM written on them. Unfortunately, I don't always put things in their proper places right away and part of this morning was spent catching up with the unsorted receipts from last October, November, and December. 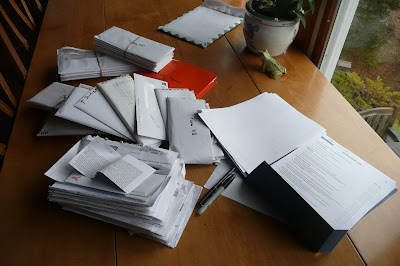 And all the while I was toiling away, I was grinding my teeth, thinking of those %#$@% s at AIG and their millions in bonuses -- which I will have the privilege of helping to pay for, once all this gets sorted out.

One begin to feel like the French peasants, watching a useless aristocracy fritter away vast sums while ordinary people scratched for a living.

Enough whining! A Happy St. Patrick's Day to you all and here's a link to some fine pictures of Ireland's sacred sites, taken by a former writing student of mine. Slainte!
Posted by Vicki Lane at 7:21 AM

Now isn't that interesting! Sorting out other people's messes re receipts etc. is what I do for a living. Would you like to post them all to me and let me do it?
I agree with you about the bonuses a-n-d it's just the same in England. Disgraceful, isn't it.
Blessings, Star

Looking forward to the recipe for that devine looking bread.

Vicki - If that wonderful bread is as good as John's biscuits we are all in for a treat!!! You've put me in a baking kind of mood. yum. What's better than still warm from the oven bread with butter dripping down the sides?!

LOVED this comment: "One begin to feel like the French peasants, watching a useless aristocracy fritter away vast sums while ordinary people scratched for a living."

Maybe baking break will make me feel a little less angry. I'm weary of the anger I'm feeling about all this AIG mess.

Oh, Star, I wish I could! I think if it were someone else's mess I were sorting out, it would be more like a puzzle and less of an exercise in self-recrimination.

Kaye and Willow - the very next time Himself makes that bread, I'll be there to document it. It really is amazingly easy and incredibly tasty!

Vicki, I love your pictures of the mist and rain. I wish it was doing that here in California. If we don't get some really good rains soon, our fire season this Fall is going to be horrific.

Your comment about the French peasants was spot on. That's exactly how I've been feeling about this whole mess.

Vicki, I am here by way of Willow. I love your banner. We had some friends that lived in Franklin, NC and it was so beautiful. I must check out your books. I used to go to writer's conferences in the 80's and 90's. AIG, ugh!!

The rain cleared today but how nice it's been to have the moisture!

The fall is usually our season for worrying about forest fires -- and worrying it is. Not as bad as for you all in California, Victoria, but bad enough that the least hint of smoke in the air gets our attention. And every rain is brings a sigh of relief.

Hey, Nana Trish! If by banner you mean the thingie at the top of the page -- that's the morning view from our bedroom window -- due East.

It is beautiful here! We have been very blessed to find ourselves in this place. And what better setting could I have for my books?