More Notes from the Road 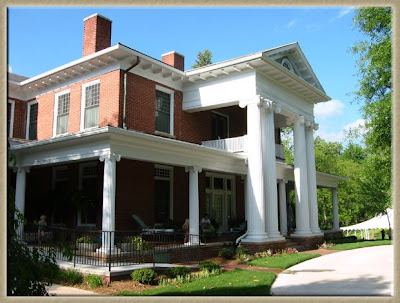 Look at this mansion! It's the Blair House in Troy, NC where the Friends of the Library put me up after my talk at the Montgomery County Library. 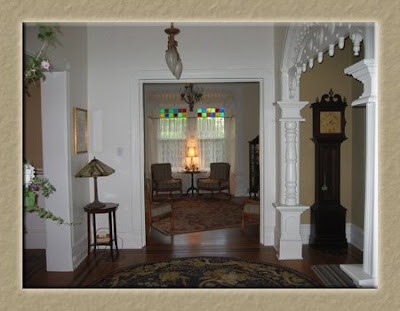 The Blair House is run as a B & B by a granddaughter of the original owner. She and her husband have made this old house into a showplace -- beautiful rooms with 14 foot ceilings, charming period furniture, luxurious bathrooms . . . all of that.

The picture below was my sitting room -- I was in the Spring Suite. 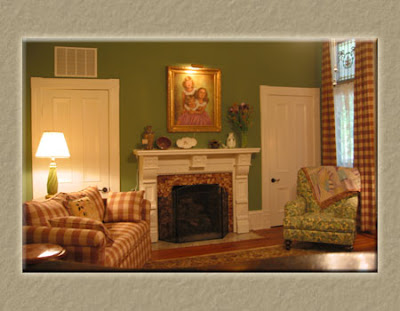 I felt kind of bad at being treated to such splendor, as abysmal weather -- pouring rain and high winds coupled with falling temperatures and a threat of snow -- had made for a very small turnout at the library. But I chatted for about an hour with those nice folks who braved the elements -- really, it's more fun to sit and chat than to stand and speak -- and then went back to the lonely splendor of my suite.

Though tempted to go on and drive home, about three and a half hours away, I didn't. John had let me know that it was snowing there -- in fact he warned me not to start out too early in the morning in order to allow time for the roads to be cleared. So I settled in make a little progress with the rewrite. 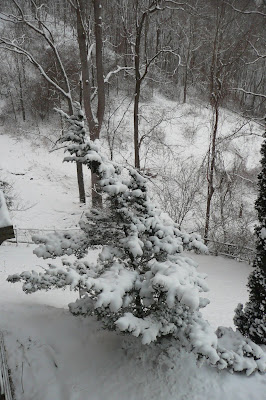 By six, I decided that I would require nourishment and went in search of a place to eat. There didn't seem to be a lot of choices nearby that weren't generic fast food and I was afraid of getting lost if I strayed too far from the mansion. I was about to settle for a Subway sandwich when I saw a little Chinese restaurant -- the bare bones type with pictures of the food choices above the counter, a few tables, and a couple of huge woks in the back.

It was empty but for two young men and one young woman -- all Chinese -- sitting at a table, the men listening while the woman chattered at a furious pace into a cell phone -- in Chinese. As soon as I came in, the men assumed their roles -- cook and order taker while the young woman went on talking -- very loud and melodious and angry-sounding (but what do I know?)

She finished her call in time to bring me my order -- served in a tinfoil dish with flimsy plastic fork and spoon. It was mediocre Chinese cuisine at best, but it was hot and the broccoli was good and crunchy and it hit the spot on a cold rainy night. (I do have some doubts as to what the meat was . . .)

But the hot tea I asked for was amazing! Not for the presentation -- a big styrofoam cup -- but the taste! It was the best green tea I've ever had -- strong and earthy tasting and made, evidently, by throwing a handful of tea leaves into the cup and filling it with boiling water. (I heard the kettle whistle.)

There was still a lot of the tea in the cup when I finished my meal. The young woman and one of the men were now in what seemed to me to be a very heated discussion. (I know I wouldn't want that woman mad at me.) So I headed for my car taking the tea with me.

It seemed odd bringing that lowly styrofoam cup back to my elegant sitting room but it was too good to abandon. When finally I had drained the last delicious drop, there was a big old glump of tea leaves in the bottom of the cup -- whole tea leaves that gave the impression of having been fresh not so very long ago.

I'd like to know exactly what kind of tea that was -- and I'd really like to know what that young woman was so agitated about.

Oh my. Vicki, Blair House is gorgeous!
But.
There's just no place quite like home, is there?
Here's hoping you're at home and all tucked in safely surrounded by all you love best in the world.
We have almost a foot of snow here - beautiful, magical and I've gotten some beautiful pictures. But you know, I'm ready for spring now.

Vicki...I'm with Kaye, give me the cozy nook at home! Glad you had a good time, hope you got home safe and also,
my Hubby does not eat the meat at Chinese food shops!

Safely home -- a beautiful drive with sun and blue sky and snow everywhere except on the road! And temps in the teens for tonight. Poor daffodils -- one brave clump had just begun to bloom.