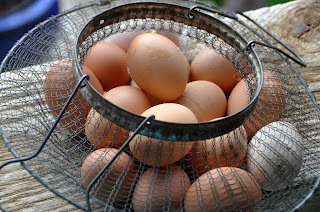 The chickens have gone into high gear and we have many eggs. I concocted this non-authentic Egg and Vegetable Vindaloo to use up some of the bounty. Like most of what I cook, it's not from a recipe and the ingredients are what's on hand. But it turned out so tasty that I thought I'd share it -- especially for my vegetarian or gluten-free friends. Heck, leave out the eggs, maybe throw in cauliflower instead, and it's vegan. 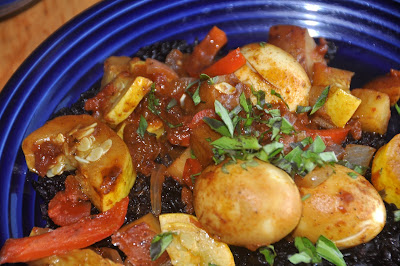 Put some butter and oil (I used canola) in a pan. Saute one diced red potato, add sliced red sweet pepper, one chopped red onion, and a yellow squash, cut in thick slices.

Now throw in a heaping tablespoon of vindaloo curry powder (or whatever kind you prefer.) Stir and let curry mix release its fragrance. Add some cut up juicy tomatoes (or canned tomatoes -- about one cup.) Or, and this is what I did, use some salsa from the fridge -- the curry will totally arm wrestle the Mexican flavor into submission.

Finish with some coconut milk -- I had only a half a can leftover in the fridge -- if I'd had a whole can, I'd have used it.

Add some peeled hard boiled eggs and let simmer till the potatoes are soft -- maybe a half an hour.

I served it atop black rice -- which I love for the look and the different taste. I garnished it with cut up fresh basil (cilantro would be nice too.)  Salad greens with sliced mango, gorgonzola, and vinaigrette were a nice, cooling accompaniment (the vindaloo is hottish and the salsa I used added another level of heat.) An icy mug of beer completed the meal. 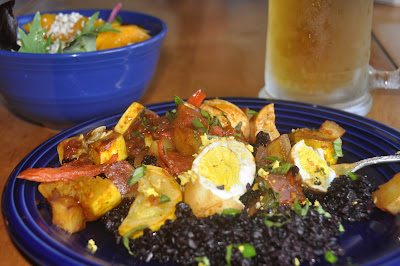 And then on another night we had Eggs Florentine -- creamed spinach over a toasted bagel, topped with a poached egg, and (and this was something new for me) crispy, crumbles of baked prosciutto -- which just might be better than bacon.  The recipe inspiration is HERE. 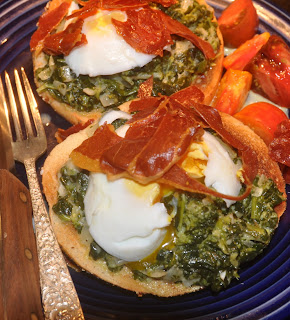 I'm a rather lousy, not more than basic cook. Your hubby must be in hog heaven, even if he's used to it.

What a great way to use up some of your eggs. Your curry dish is so pretty and I like that you added some salsa towards the end. Crispy prosciutto is great isn't it.
Sam

Sounds like a winner...both of them. Now just to get me into the kitchen to cook...

It looks delicious, and the presentation is lovely. :)

Vicki, how wonderful to have truly fresh eggs as the inspiration for these delicious meals!

I have made some vindaloo notes...even if there are no hens living near this apartment.

Either one will do. I am not picky. All joking aside they look delicious

I am voting for the second recipe!

It is all making me very hungry. The bird flu in our area has stopped most egg production and eggs are being shipped in from other states.

We, too, have chickens and another abundance of eggs. I usually make custards or quiches since I really don't like eggs. (My husband is the one who raises the chickens. I intensely dislike the biddies.) But I love the way you cook - that's what I do. And I love the ideas on how to use the eggs. I'll pass them to my husband to make for his lunch someday. Or I'll cook the vindaloo and eat around the eggs.