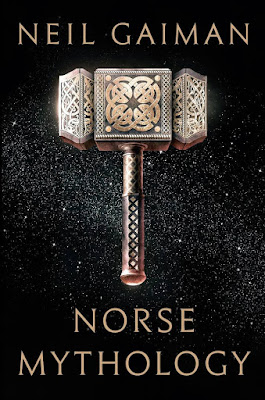 I grew up reading Greek mythology and knew those gods and goddesses and their carrying on backwards and forwards. But somehow I was never much attracted to the tales of the Norse pantheon -- for one thing the names were so hard to pronounce (and there are so many of them, even for inanimate objects like Mjollnir and Gjallerhorn.)

And though I was aware that my literary heroes C.S. Lewis and J.R. R. Tolkien were deeply influenced by these stories, I managed to avoid knowing much more than the bare details of Odin, Thor, Loki, and Valhalla.

When I read Gaiman's wonderful American Gods and realized that it was all about the Norse gods, albeit in modern form, I thought to myself that I really needed to pursue this.

Now the perfect introduction has come along. Gaiman's very personal story telling style introduces the Norse pantheon in manageable doses. And since I have the audio version with Gaiman doing the reading, now I know how those tricky words should be pronounced.

It's not a scholarly approach -- it's a story teller's version. Indeed, in the introduction Gaiman encourages readers to make these stories their own, to retell them -- just as they have been retold down the centuries. As I listened to the tales, I could remember echoes of them in various books and see parallels in other religions and cultures.

I adore listening to Gaiman read. And here he's made these stories his own -- the Norse deities speak, not in the high flown language some might ascribe to deities but in colloquial English -- British English with a variety of accents.

I highly recommend this book on its own merits and because it's a great start -- I foresee doing some more reading, serious reading, to broaden my  understanding of this mythology.

HERE is an excellent review from the Washington Post that pretty much coincides with my own reactions.

I believe he's been collaborating with Terry Pratchett, but I'm not sure I've read his own work. And I also am really untutored in Norse mythology. Great to know how I can learn it, as well as how to pronounce names!

He co-wrote GOOD OMENS with Pratchett -- I don't know of others.

I adore Neil Gaiman and his writing. I am looking forward to listen to his "Norse Mythology", thank you for making me aware that an audio version exists.

I agree . Thankyou for the lead to the audio version . It might stop me going mad while I finish a staggeringly time-consuming piece of sewing .

I'm so one dimensional. LORD OF THE RINGS is it for me. I have read them three times and seen the movie twice. Odin forgive me. Long live Frodo.