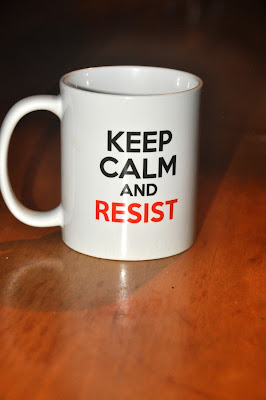 My sister-in-law Fay sent me this mug -- so appropriate when every day there is some new and worrying story about where this country seems to be headed.

Two Hindus shot because the shooter thought they were Middle-Eastern;  five squad cars sent to deal with nine senior citizens (complete with canes and walkers) who were trying to slide a letter under the office door of their so-called representative; a Jewish cemetery vandalized; innocent people traveling on legitimate business denied access to the US; Congress persons refusing to hold town halls; the Administration planning to cut funding for the arts while running up a bill for travel and security that dwarfs the paltry amount NPR or NEA receives; people who have lived and worked peacefully in the US for years being deported; the White House choosing not to include in a press conference certain members of the media that have been critical of the administration . . . 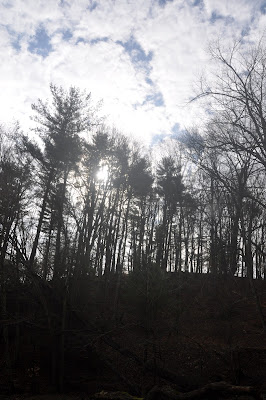 (deep breath) and that's only the tip of the iceberg. Our government is in the hands of mad deconstructionists -- people who would destroy the village in order to save it.

They want to defund Planned Parenthood -- even though their birth control services have contributed greatly to the lower number of abortions; the ACA is in their cross hairs, along with Social Security, Medicare, and Medicaid; down with the EPA -- who needs clean water and air as long as Big Business can make a few more bucks; build those pipelines to benefit the Big Donors; encourage prisons and schools run for profit (though they've been shown to be inferior); trample on the rights of LGBTQ people to placate the base . . . oh, I could go on and on . . . but it's mostly about money -- keeping the pay to play crowd happy.

In addition, every day, in every way, this administration is contributing to the dumbing down and lack of civility that is beginning to characterize our once great nation.

I'm going to need that mug every day. And I may need something stronger than tea or coffee in it. 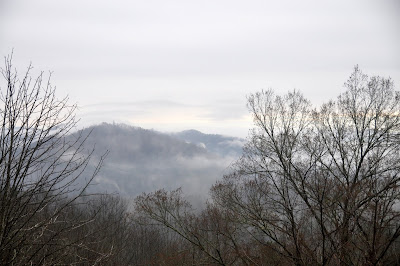 Yes. I was at my congressman's town hall this morning, not getting the answers I wanted to hear, and I plan to keep showing up and calling until that changes.

And it's only the end of week five. At one time I might have used an exclamation mark - but I've reached the point where I'll be content if I never see another one, or hear or read 'unfair' or 'sad' or 'very.' And, yes, I know these are silly, minor, annoyances when we're seeing daily efforts by this administration, and those in congress who profess to be the staunch defenders of the Constitution, to quickly dismantle that very document, and its Amendments, and destroy all they stand for.

Karen B., good on you! My husband and I have joined a local political action committee. Our leader is going to Raleigh on Wednesday to discuss gerrymandering and several other issues with him. We're all writing postcards and letters to the editor. Resist!
Deana the Queena

Nobody lists the causes of our despair better in paragraphs than you Vicki. I think what appalls me most now is the other party - the ones in power sitting on their hands, and their rank and file (by latest polls) approving of these policies. There is much to resist.

The poor feller he's just insecure in his new play pen. Get him a new pacifier and life like manikins he can shout at bully and insult. He is deplorable!