From Our Far-Flung Correspondents . . . 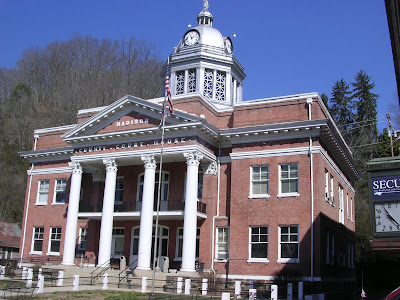 The following was brought to my attention by Liz G. -- it's from the Commentary section of yesterday's Chicago Tribune. And it's about Marshall -- our county seat and the place I call Ransom in my books.

The writer got it mostly right.

No heated toilet seats in Marshall

Two recent trips exposed me to what is right with America, and wrong
Let's start with the wrong, as that was quicker. I was recently in Las Vegas, visiting some of the money I'd left behind on previous trips. In the middle of my first night, I awoke and stumbled into the bathroom where I was met by something wholly unexpected: a heated toilet seat.
Don't get me wrong. It felt good, and I know Sin City is home to excess, but let's ponder this for a moment.
To enjoy the warmth on one's rump for two minutes per day, the seat is heated for 1,438 minutes more! As I sat, I thought of my father's stories of how he used to dig the pit for his family's outhouse, which made me feel particularly guilty.
I am convinced that when historians look back in 500 years on the downfall of American civilization, they will trace it to heated toilet seats in Vegas. Reality television and bacon martinis may also be on the list, along with competitive kindergarten.

Now, as for what is right in America, I take you to Marshall, N.C., where I recently spent a long weekend with family. Marshall is in the Blue Ridge Mountains of western North Carolina, about 30 minutes from Asheville, a hip town. But to give some perspective, Asheville — at least culture and pace wise — is closer to Manhattan than it is Marshall. And therein lies the joy.
On our first night, we found ourselves at a little restaurant in "downtown" Marshall called Zuma. It was packed with soft-spoken locals, and a number of musicians engaged in an impromptu bluegrass jam session. One was better than the next. When I asked a regular who one fiddler was, he said, "Bobby Hicks, he's pretty good, ain't he?"
As my urban impulses got the best of me, I Googled Bobby Hicks and learned he only has 10 Grammy Awards, not that he, or any of the other talented musicians, would tell you. And here he was playing for nothing. Nothing, of course, other than true joy and the comfort of a night spent well with neighbors. 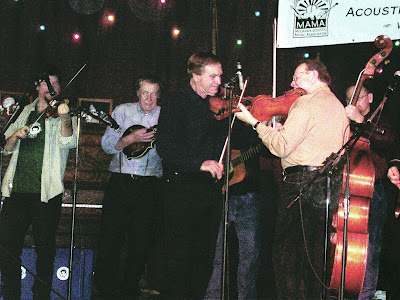 Later in the weekend, I found myself in the parlor of Pat Franklin, whose family's roots in these parts go back to the early 1800s, if not earlier. Strumming guitar and sharing some gritty lyrics in her parlor was Larry Norton, who lives nestled in the mountains 15 miles away in an even smaller "town" called Sodom. Sodom, I am told, makes Marshall look downright cosmopolitan.
Larry, who likely lacks an eighth-grade education, played hymns and tunes so pure, some of which are unchanged in these hills for hundreds of years. Even Johnny Cash might have felt like a sellout in his presence.
I also learned during my visit that it was in these hills that the American revolution turned, where the British suffered some of their first setbacks. It was also here in the Civil War where brother literally fought brother, with the area bitterly divided over slavery.
And truth be told, these "Bible-thumping folks" in Marshall are not only more welcoming than any of my urban counterparts, they are actually more open-minded as well. They combine sincere appreciation and contentment with respect and openness.
It is easy to dismiss places like Marshall and their people as "hicks in the sticks." These "hicks," however, can surely teach us city slickers more than we can teach them.
If the grid went out, they'd survive a lot longer than you or I, but it runs deeper than that. Even if the grid doesn't run out, they may fare better — or at least understand and appreciate life better — as they practice balance better than most others.
Now I am sure I am romanticizing my weekend a bit, but between the majestic mountains, quiet streams and earnest locals, it may be well-deserved.
While so much of our world is pre-fab, contrived, hyped and artificial, Marshall is — in a word — authentic. And to be clear, authenticity does not mean all is candy canes and roses.
Quite the contrary, much of life in Marshall is hard. But hard or not, in Marshall, what you see is generally what you get, people mean what they say, and there are few mixed messages.
If you visit, you'll find much to like, just don't go looking for a heated toilet seat.
William Choslovsky is a Chicago attorney. 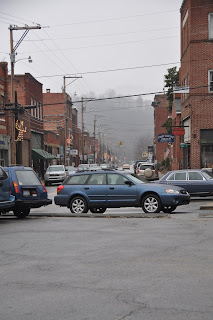 You mean there is more to the mountains than Asheville? ...just kidding. I look forward to visiting these small towns!

I've a feeling, as a result of this, Marshall may have made it to the top of the 'places to visit' list of many people. A curse or a blessing?

Interesting, on a cultural note, the WV is tosca!

Your area of the world sounds like just the sort of place I would love to visit.

quite the contrast...not liking the heated toilet seats...lot of waste ...but a slower life i do crave...

It couldn't have been more beautifully said about our lovely mountains that we call home. What you see is what you get.
Sam

I've never been to Marshall but I can see it through your eyes. The closest I've come is on the highway through the mountains when we went to visit the Biltmore House and on the way back from Aiken in South Carolina after Larry's dad's funeral.
I'm sure I have the essence of it in my mind and I hope it retains its character and culture for many years to come.
Over here in England I am always dismayed to see another MacDonalds or Starbucks springing up, not because I don't like these places, I do like them, but because they do not belong in England, they belong in America. When tourists come to England they don't come to see Starbucks or MacDonalds they come to see quintessential English teashops, don't they?
I think we are in danger of having every town and city look exactly like the last one we just passed through.
Blessings, Star

I totally agree with him!Nothing like a trip to small town Appalachia to make you aware of what is STILL right in this world! XOXO

Marshall has pretty much already been discovered by the outside world -- many of the old buildings have been bought and renovated by people from away. But it's still small and, thank goodness, there are no Starbucks or McDonald's.

Bobby Hicks himself is a relative newcomer -- as is the coffee house he plays in (I remember when it was Home Electric and we bought a washing machine there!)

But it's true that the local folks -- the natives -- are welcoming and that Marshall and environs are
great places to find the 'real' mountains.

What a lovely article! The North Carolina mountains have had a pull on my heart since I was a child, as there is a magic in the hills unlike any other I have visited. West Virginia comes close, but not quite. But it is the music that is practically a religious experience for us. There is something so pure and true in every performance we have seen there, whether at a bar, a community center or concert stage. Talent seems to ooze out pores in those hills. I can't wait to get back and look and listen some more.
I love that Marshall is called Ransom in your books, as that is my family name. There is a town in Pennsylvania settled in the 1700's named after my many-greats grandfather.
Thanks for sharing this article, which I missed in the Tribune. I agree that western North Carolina's people are authentic, the real deal. I love that you capture so much of that in your characters.

I had no idea
What a great article about your town...

My Father worked for the railroads in the Carolinas, during the 1920's. My goodness, almost a hundred years ago, now. I'm getting old, I guess.

He would always talk about the beauty of the mountains, and the wonderful people who lived there. He wanted to move there, when he retired, but never got the chance.

I grew up in the flatlands of eastern North Carolina, but when we'd come to the N.C. mountains for vacation, I always felt like I'd come home. I feel so blessed to live here now. As they say, I wasn't born here, but I got here as quick as I could. :-)

We gave up a lot to move here, but I've never regretted it. We have found rest.

No wonder you find enough to tell to fill whole bookshelves of books.

What a great post Vicki. Thanks for the history lesson but leaving me with hopes that I win the lottery so I can get a heated toilet seat!!! Merry Christmas

Now I know I want to come there. (though in these times of 5℉ I think I could like a heated toilet seat!)
Vicki, my best wishes to you, and to those you love, for a very happy Christmas.

No wonder you live there !
I'd love to spend an evening listening to the music and I wouldn't mind the lack of a bacon martini (????!) at all .

Thanks, Mel! Nice to know about the Ransom connection -- I took the name from a character in C.S.Lewis's sci-fi trilogy. It's a nice little town, whatever you call it. And yes, there is music everywhere.

It was a coming home feeling for me too, Beth -- arriving some thirty five years ago from the flat flat lands of Florida.

What an interesting article. I have been to Burnsville, NC, a couple of times and I think it is not too far from Marshall. It certainly is beautiful country up there. I hope we will go back to these mountains in 2011.