FAQ - How Can I Get an Agent's Attention? 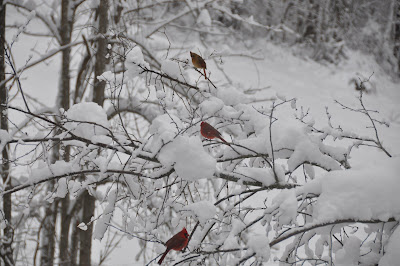 Q: I want to submit a query letter to your agent. Any suggestions on how to appeal to your particular agent in my query letter?
If she likes chocolate, let me know what kind. (joke)
A: Oh, I know this feeling. How can you stand out in the crowd of submissions?  Write your query letter on the back of a hundred dollar bill? Drop names of people that the agent might know?  Say that you're sure your book will be a great TV show? Include cookies?
The only one of those suggestions that might work is the name-dropping -- and then, only if the name in question has read your manuscript and is willing to provide a blurb for it, if it's ever published.  (Not many authors will read unpublished manuscripts because of the possibility of being accused of plagiarizing should they at some time in the future write something similar.)
Another time you might name drop would be when using a comparison -- as in, 'When I learned that you represent Glamora LaMour, I thought you might be interested in my manuscript which contains a similar blend of red hot passion and culinary hints.'
Really though, the best thing that you can do is to give an honest look at what your book is about.  Of course you want a tantalizing hook that will make the agent want to learn more . But don't promise something you can't deliver.
For example, suppose you find out that the agent you're  querying is fond of books with feisty grandmothers and your main character has a grandmother who appears in one scene. It might be tempting, when you write your query, to make more of that scene than there is.

But imagine the agent , enticed by the thought of a story about a feisty grandma, eagerly reading the manuscript only to find that it's really all about a twenty five year old  triathete/astro-physicist . . . well, I suspect that agent might feel not only disappointed but that she'd been had.

My agent asks for a brief letter and the first ten pages of your book.  It's those opening pages that will make the difference as to whether she'll want to see more.
All the gimmicks in the world won't sell an agent if she isn't grabbed by the story itself. It's the  writing that will single you out from the crowd. 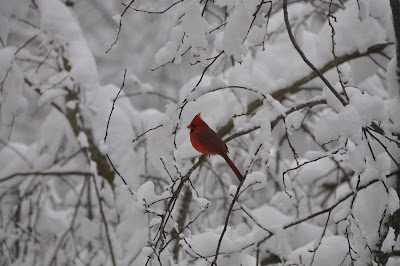 Your photos are stunning, such a beautiful white world and the gorgeous red birds. i have never seen anything like this ...the snow or the birds.
As always, I found this information interesting as the world of a writer is unknown to me.

Good advice, and to the point. I was taken by the photos of the redbirds in snow. Last year I was moving some shelving at work, and on one of the shelves was some kind of scuff mark. As I often do, I took a picture with my cell phone. To me it looked like redbirds on a wire in the snow.

I once wrote half a novel on the back of postcards (a couple of hundred words to each postcard) and sent them off to various people. Didn't work but it was probably my fault as I spread the risk by sending them to different people.

How glorious that dash of scarlet against the white!

Three Cardinals in a single tree, that should show any agent that you are capable of extraordinary achievements!

Cardinals say Christmas.
I miss them!

With the snow/cold here my bird feeders, and the surrounding trees, are covered with birds, especially cardinals. Beautiful sight, just like your pictues.

Oh, pretty cardinals! And you got snow...we got almost none, but it is nine degrees this a.m. and all day yesterday what little snow we did have blew around and made things worse.

Your books are great like your photos. However I hope that your publisher is not as cold as these winter pictures, and will always accept your manuscripts with enthusiasm and warmth!
Thanks for your visit and comment. I agree with you that the "Potato Eaters"are depressing and all his other paintings from that period.

there are usually seldom short cuts...as you aptly point out...it will come down to the writing...

Lovely pictures today Vicki and a very informative post. I think that's a good idea - for the agent to ask for the first ten pages. That is usually enough for anyone to know if the book is going to be interesting or not.
Blessings, Star

Dear Vicki: Love the cardinals a la mode! Great practical ideas about the 10 page limit, no need to know more as there could be "too much information" and an author should have rights and priviledges that are honoured by the publishing business. Sometimes it is all one sided definitely a balance is needed. Cookies and chocolates plus name dropping would definitely motivate me on a very positive level should I ever take upon the mantel of publisher. Ya never know; just sayin'!

VIcki, I had four cardinals visit me too, yesterday ..3 females and one bright red male...
Interesting... this peek into the business of writing
It does all come down to the writing and a well crafted story doesn't it

I loved your post! Informative, yes. But what it really did was give me lots of hope for a fair shot at a good agent.

I can't believe Alan Burnett. Maybe he was joking, but if agents really do get those kind of "queries", maybe a sane one will stand out by contrast.

We are blessed with cardinals (the red birds) year round -- indeed, they are the North Carolina state bird.

Funny, Rick! Over on Miss Yves blog last week she posted a lovely picture of a black and white cat sitting in the snow. When I enlarged the photo, I saw that the cat was actually a black plastic garbage bag! Un-enlarged, it too would have been a good painting!

Novel by postcard is a gimmick that just might work, Alan.

The use of email submissions has really speeded things up -- not to mention the saving on postage and paper.

Excellent advice. Beautiful pic. I love how your cardinal posed for you. Mine wouldn't sit still for me yesterday!

Your photos are beautiful. I always consider it a gift when I see a cardinal against the snow.

I wanted to say again how helpful this advice is for me. I have a bunch of questions, but I don't want to bombard you so maybe just one? Do most agents actually look at queries from writers who have very few publishing credits to their name and does it matter if the publishing credits they DO have are old (over ten years ago)? Okay, that was actually TWO questions, but at least they're related. :-)

By the way, I really like your sense of humor. If only I could write with a blend of red hot passion and culinary hints like Glamora LaMour!

Beth -- It's the writing that trumps everything. If you have published (and that doesn't mean vanity press or self-published) and the book sold well, it would be worth a mention, even if it's ten years ago. But it's the writing of your current work that will convince the agent whether or not this might be a book she's interested in.

My only 'publishing credit' was a couple of how to books on quilting which I mentioned because I had nothing else -- no MFA, no short stories in literary journals, nothing. But writing about quilting and writing fiction are so totally different that I doubt any agent was persuaded to look at my stuff because of that.

Great set of photos ( here and below)

Thanks so much for answering my question(s), Vicki. That's good to know. My credits are very small, really---no books. Just short stories, poems, essays, and editorials. And all of them years ago before two children (one of them autistic) and some hard times silenced my Muse. In fact, I started my blog to force myself to write, whether I felt like it or not.

Thanks again for your reply---I appreciate it.

Great advice Vicki. I will remember every word.
Sam

Awesome pics Vicki!!
the red hot passion comment made me think of the "Bread " books I gave you, have you read them? XOXO