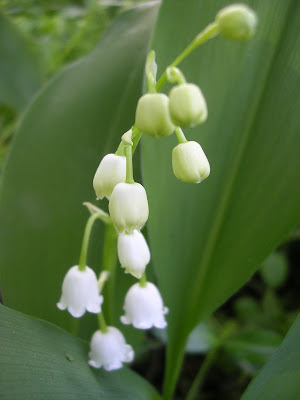 Lilies of the valley deck my garden walk.
Oh, don't you wish that you could hear them ring?
That will happen only when the fairies sing."
Every year, when the tiny fragrant lilies of the valley come into bloom, I'm reminded of this song from my time as a Girl Scout and I slip into a haze of reminiscence . . .
I adored being a Girl Scout. In those simpler times of the mid-Fifties, I even loved wearing that green uniform. Our troop met at St. John's Episcopal Church and we always concluded our meeting by going to Evening Prayer in the church's dim little chapel. Piously we knelt and stood and sat, singing the responses, knowing ourselves to be steeped in goodness. The beautiful words of the liturgy still lurk somewhere in the back of my mind.
One of the things I best remember about that troop was The Gold Key -- a much coveted award, given after a camping trip, to the Scout who had best lived up to the Scout ideal. And here's the really clever thing -- it was awarded secretly. At the end of the meeting after the camping trip, all the scouts would take off their green webbing belts (each marked inside with the owner's name) and one of the assistant scout leaders would disappear with the belts into a back room.
Finally we would form a circle for the closing ceremonies and while we were singing -- probably the white coral bells song -- we would close our eyes and the scout leaders would quietly put our belts back around our waists. A gold key would have been painted inside one of those belts but the recipient was never named. As I recall, no one even checked inside her belt till she got home -- it just wasn't done. And girls rarely spoke of receiving the award though, somehow, eventually it became common knowledge just whose belt held how many gold keys.
Our Scout leader, Polly Telford, who introduced me to the Narnia books and tried to teach me to swim, was the kindest, most selfless of women. We all adored her and she, in turn, worked very hard to provide us with all sorts of treats and outings. And here's the other side of the happy memories -- and my first experience with the frightening power of the mob.
Polly invited the troop for a spaghetti supper at her house. (Simpler times, as I said -- this really was a much anticipated treat.) Vats of sauce and pasta were prepared and we filled our plates and settled like a flock of pigeons all over the just-installed velvety gray living room rug.
I don't know who threw the first piece of spaghetti. I sincerely hope it wasn't me. But soon our well-mannered, church-going, Scout Pledge reciting group of ten and eleven year-olds were in the midst of a major food fight -- a veritable riot.
And I don't remember what finally stopped us; we were well and truly out of control -- a mindless, screaming mob of preteens. Maybe someone turned a fire hose on us -- it seems like it must have taken something drastic.
I do remember exactly what that new carpet looked like with curling noodles patterning its stained surface. And I remember the lot of us, the next day --penitent, stunned, weeping -- trying to clean up the terrible mess we had made of our beloved leader's house, wondering how we could have done such a thing.
That was over fifty years ago and I'm still baffled and saddened when I remember the unthinking chaos we slipped into as if it were an old familiar garment. Even the Gold Key girls threw spaghetti that long-ago night.

Labels: never underestimate the power of the mob

I was in Girl Scouts, too. What fun times we had! I can't remember our troop leader's name though...I only remember her as 'Carol's mother." I can recall exactly what she looked like, though...terrible with names, but Inever forget a face.

Your photographs in the previous post's slide show are so beautiful!

I can imagine...the pious little girls. And then a food fight. So typical.