The Real Thing -- Our Mountain Mentors 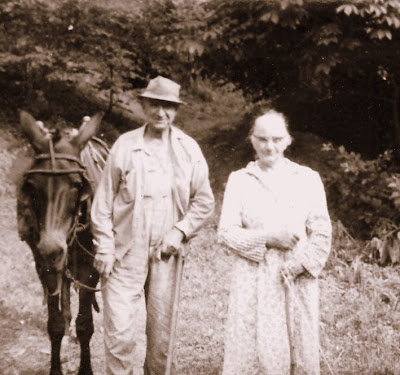 In 1975 we moved to our farm. We had purchased the upper sixty acres of the land that Clifford and Louise Freeman had tended most of their lives -- and Louise's family before that. The Freemans kept the lower forty acres for another year, during which they taught us some of the many things we needed to know.

In this picture Clifford and Louise and their 34 year-old mule Nell are climbing up the road that runs by the barn we were camping out in, on their way up to salt the cattle. Clifford would begin hollering "Soo cow, soo cow, hey calfie, hoooo-eee!" and the cattle would begin to bawl in reply and come from wherever they were on the mountain to the salt rock -- the big rock just below the old cabin (the Ben/Little Sylvie cabin.)

"Why don't you just put out a salt block?" we asked, thinking that would save them the weekly climb. But Clifford kindly and gently explained, "Well, now, we could do that. And that would be a sight easier.But this-a-way, don't you see, we can count them and make sure none of 'em ain't sick or hurt and, what's more, this-a-way, they come when I holler. And that's worth a lot, everwhen I need to move 'em down the mountain."

We were so very ignorant in the ways of country living -- in spite of having kept chickens and raised a garden when we lived in Florida and in spite of our well-thumbed stacks of Mother Earth News and Organic Gardening. Our mentors tried gently to lead us in the ways we should go -- and I suspect our misadventures formed the subject of many a humorous conversation around their kitchen table.

Clifford and Louise were, of course, the inspiration for Sam and Elizabeth's mentors, Odus and Dessie, "the old woman who, some twenty years ago, had welcomed her and Sam to Ridley Branch, here in the mountains of North Carolina. Dessie had been in her mid-sixties then, sturdy and vigorous. She could hoe tobacco for hours on end or dart up the steep mountain trails after a wandering milk cow. Dessie and her husband Odus had taken Sam and Elizabeth under their wing, helping the newcomers adapt to country life and teaching then how to do the myriad tasks that were part of life on a small mountain farm." (from Signs in the Blood)

Eventually Clifford and Louise moved to a neighboring county -- to a new house near their sons and an easier way of life. Now, of course, they're gone and we find ourselves passing on the lessons they taught us to the next generation. We were fortunate to have known these folks -- some of the last of the real old timers.

Vicki - I stumbled across your blog while searching for all things Madison County. We are building a home in Big Pine later this year and will move there in the Fall of '09. I think we may be lucky enough to have a neighbor like the ones you found in 1975. Thanks for your wonderful photos - I miss the land so much when we are away and it's great to be able to step back in and take a deep breath. We've already made some friends in Madison County and are anxious to be a part of that community - Thanks again

Where on Big Pine are you building? Big Pine's just over the ridge from our farm -- there are lots of folks over there I call neighbors -- lots of very nice folks. Welcome to the neighborhood.!

We're on Horse Knob Drive just below Chuck Durden. We have fifteen acres of glorious mountainside into which we are going to tuck a cottage. Let's hike a ridgeline soon!

That means you're just over the ridge from us. I believe we border with Chuck at one end of our ridgeline.

I look forward to meeting you!

Hi Vicki, Pat and I really enjoyed seeing the photo of your mentors Clifford and Louise (and Nell). Also interesting that you heard from Liz, the new neighbor who's coming to Horse Knob. Hopefully we'll meet her soon. Looking forward to your talk at the library! Connie

The Freemans were treasures -- like Paul and Grace. I'm going to have to go back to some of my old albums and find some more pictures of that faraway time to share.

Funny to be 'meeting' a new neighbor via a blog -- but kind of cool too. I feel downright modern.

Looking forward to seeing you all at the library!