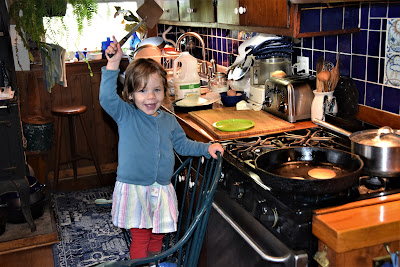 Josie decided she could flip the pancakes yesterday morning. She has figured out that the Windsor chair is the perfect perch from which to supervise cooking.

I had intended to let her help me make the birthday cake for today's party -- six layers in rainbow colors -- but by the time the butter was at the required room temperature, she was down for her nap.  And by the time she was up again, the layers were assembled and lightly frosted.  The hard part -- the decorating -- was yet to come and I needed to be alone for that. 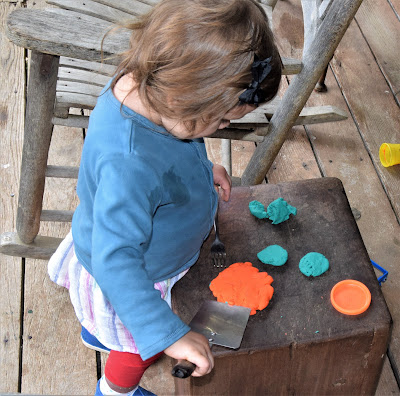 After her nap, she decided to make Play-doh pancakes.
"I need the spatula," she insisted. 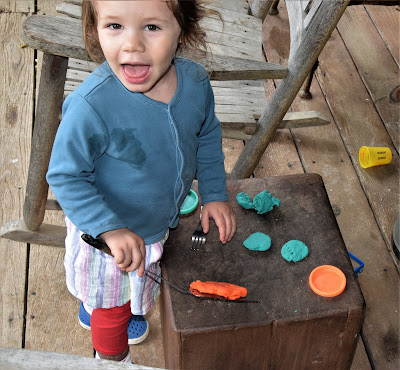 She's into verisimilitude -- she used a fork to poke little holes in the tops of the pancakes so it would be time to turn them. 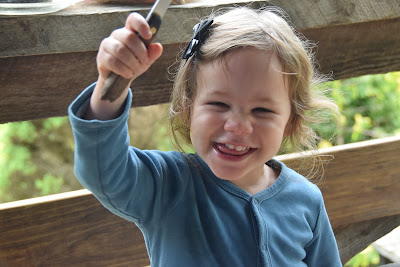 When she'd returned home and after our dinner, I read the instructions on the cake decorating equipment again and girded my loins.

I've never decorated a cake, as such, but I had blithely told Claui I would make a rainbow cake for the party. And I figured that, along with the words Happy Birthday, Josie, there should be a rainbow. How hard can it be, I thought. 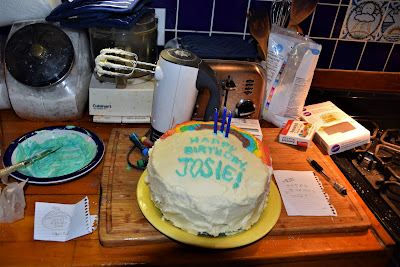 Turns out there's a good reason professional cake makers charge so much.  And take classes to learn their trade.


But, as I told John, at least it looks sincere.

(I'll get a picture of the inside when it's cut, along with party pics as well.) 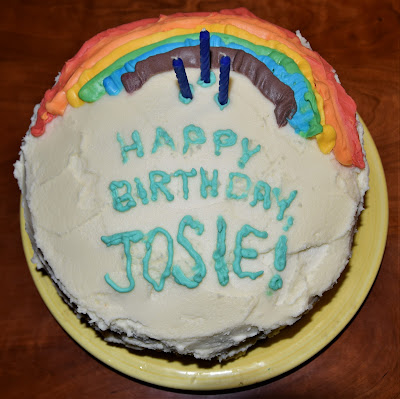 Rainbows are so beautiful, wherever they appear. May Iris (goddess of rainbows) bless this lovely cake and the party...and all who enjoy celebrating the 2nd anniversary of Josie's life.

What a sweetheart Josie is. I love that she pays attention to detail. You made a lovely cake. I see there are three candles. Do you subscribe to the "and one to grown on"? Have a most wonderful party. Kudos to the baker.

Yes, the third candle is one to grow on.

Just took some Korean dogwood down to the house for party decorations. Josie is still in her pj's and her Grandpa is reading her a book in hopes that she'll go down for a nap before the party. She is pretty excited about the whole thing. Grandma and Mama are in a flurry of preparation (rainbow fruit kabobs) while John is mowing around the lower place and Justin is moving mulch. Nothing like a party for getting stuff done!

It’s beautiful, and made with great love. I’m sure she’s delighted with it. Looking forward to more birthday pics!

What a great memory you have made with stories to tell. I think the cake looks lovely, and I’m looking forward to hearing more “story” soon. I just know everyone is having a great day, ❤️❤️

I’m totally impressed and haven’t even seen inside!