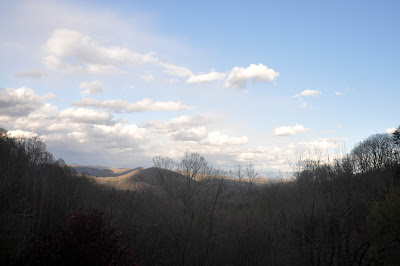 I was going to talk about the damage done to my beloved state of North Carolina by HB2 -- the hateful so-called 'bathroom bill' ( full explanation HERE.) 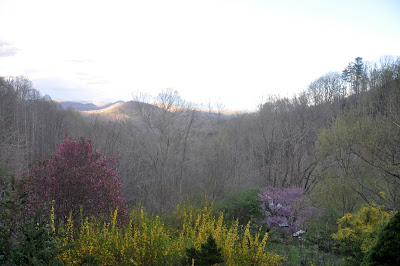 I might have listed the growing number of boycotts and threats thereof against our state (partial list HERE) -- PayPal cancelling plans for a center in Charlotte that would have brought in hundreds of new jobs is just one . . . 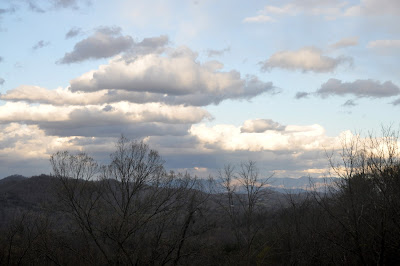 I might have mentioned Bruce Springsteen's cancellation of a NC concert and Sherman Alexie's non-appearance at my favorite bookstore, Malaprop's in Asheville -- both cancellations because of HB2. 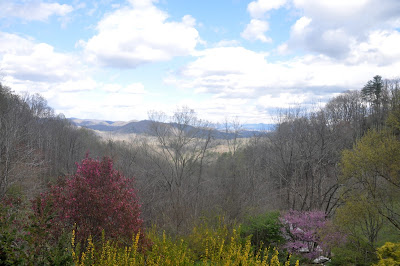 I might have tried to make sense of it all, wrestling with the desire to show our 'pro-business' governor and General Assembly  how these retrograde policies are, in fact, harming business in NC . . .  while at the same time admitting that some of these boycotts are harming the very constituency that is already determined to vote the bigots out of office. 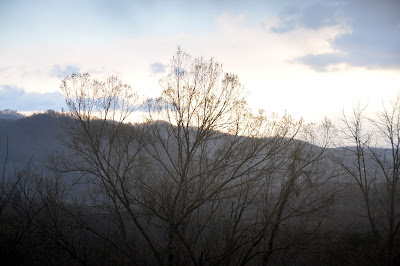 I might have said all these things but I couldn't come to any useful conclusion so instead I just wanted to show you what the eastern sky looked like as freezing weather rolled in yesterday afternoon -- a looming threat to all those pretty blooms I've been showing you.

With any luck, this too will pass. 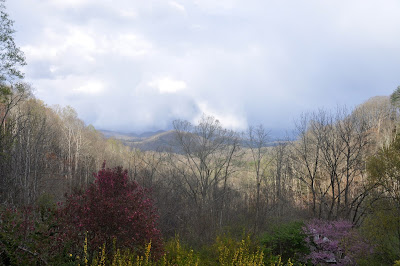 Bigotry abounds in other states as well. Separation of church and state gets blurry in some places. Thump goes the fist on the bible and the self righteous bigots win one. But not for long.

Such an odd preoccupation with bathrooms. Stalls all have doors, right! Has anybody ever seen anything of prurient interest in a bathroom?

I was feeling so bad for all my totally non-bigoted business friends whose businesses are being affected, but here's what my friend Pat Poole of Duck Dance Farm said, "Andrew and I believe the boycott is important. Our personal businesses are suffering greatly but we don't think that the change needed would come without the pressure of the boycott."

What a generous spirit!

Also, there was a really good article in the Charlotte newspaper recently that says McCrory will cave:
http://www.charlotteobserver.com/opinion/op-ed/article69855297.html

The older I get the more the world dumbfounds me. I think of the sixties when I was in college and I thought at the time if we get through this, the world will be a better place. I thought (and hoped of course) that the hate and prejudice would finally go away. Well, we got through that and it seems we're right back where we started. Thanks for the pretty photos. They are very inspiring and bring hope that there will be another day and that day will be better for the world and everyone who lives in it.
Sam

When I wrote my Representative (Whitmire) to ask him to explain his vote here was his response in its entirety: "Good morning. Very simple---over 80% supported it and it was the obvious. Good Day" I wrote again (silly me) to say I was disappointed in his curt answer and that he owed his constituents some sort of answer when they bothered to write to him. His response to that was a link to two Websites. One to the John Locke Foundation and one to a right-wing bible-thumping group called ncfamily.org whose mission is "religious liberty," their buzzwords meaning "free to discriminate based on my religion."

I'm curious as to what the 80% approval means. 80% of what? And how did he get any approval when the bill was introduced, discussed, passed, and signed into law in less that 12 hours. I decided it was not worth the effort to ask Whitmire. But I will keep letting him know at least one of his constituents holds him accountable. Perhaps a letter to our local paper might prompt a more comprehensive response from him. But I doubt it.

Vicki, your mountain landscape photographs are so beautiful. They provide quite a contrast to the North Carolina I've recently been reading about (not the sports page news.)

How is it possible for so many folks in North Carolina (and other places) to be so aggressively intolerant?

As you know, I have been considering various places as relocation alternatives. I'm sure that every place has a variety of plus and minus aspects; however, I really don't like the way the wind is blowing in North Carolina these days. Maybe, a more tolerant change will arise.

We are part of this, though we don't have good answers yet. Thanks for dealing with it at this point, and giving us great photos to consider. Those show real power. Those photos show how mother nature and weather and the sun and earth, the trees and grass and all the critters existing (including people) are part of it...the power of life. The NC reputation has become international with the internet, and may be a focus for change. Maybe.

I am confused. I guess the early Romans had common public bathrooms and everybody just did it in the public arena with everybody. How many kinds of bathrooms will we have to offer after while when the peeping....., oh never mind. I really like the mountain views. You have some great photos.