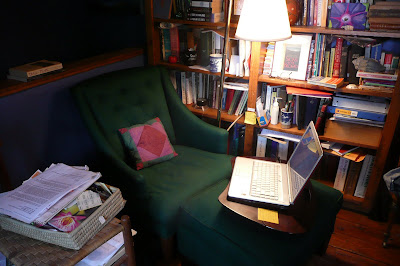 . . . what ever happened to my writing chair that I hauled off to be re-upholstered. Well, here it is, in its fresh new green cotton splendor.

I really should have taken a before picture -- under the home made blue and green slip cover (shown in the photo over in the sidebar, just above the Zombie Chicken Award) was a truly ghastly sight -- filthy, faded, fifty-year old pale blue brocade covered the chair -- mostly. Except where the stuffing was poking out. In spite of a pillow on the seat, it was becoming increasingly uncomfortable to sit in for any period of time.

The ottoman, another piece of furniture from my grandparents' house, was in fine shape -- its faded yellow brocade untorn. But I went on and had it recovered as well.

They look just grand -- and the dogs and cats agree, fighting to sleep in the chair when I'm out of it. So I've put the old slipcovers back on to protect them.

At least it's not clear plastic. 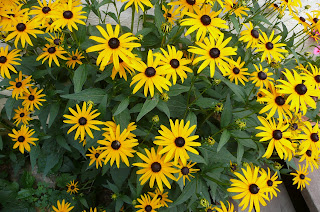 Pat's other question was about a comment from Willow a few days ago. "your sighting of the young girl with the hoe just gave me the shivers! What a perfect inspiration for a book character."

Briefly (and there's not much to tell anyway), our house (built by my husband in 1975) sits in the middle of what was once a tobacco or a corn field. One night, in the early years of our occupancy, I was alone in the living room, drowsing on the sofa, and I saw a young woman in an ankle-length homespun skirt, standing there with a hoe in her hand.

That was it. She didn't move or speak or go Oooooh. And I've never seen her again. But she was in my mind when I wrote the Little Sylvie story -- twenty-five or so years later.

Any more questions? I know the answer to the Ultimate Question, the one about Life, the Universe, and Everything. 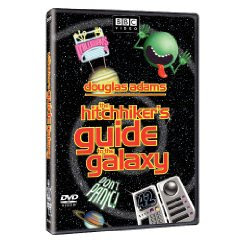 WOW, answers to my questions with just a snap of my fingers, or actually with you hitting the enter key on the keyboard!

The chair looks beautiful, and how neat that you now have a matching ottoman. Funny how your furry critters want to claim possession.

The 'ghost story' is very interesting ... I've had one mountain neighbor who had such an experience also.

Looks really comfy Vicki!Anne McKee and I spent three hours talking on the phone yesterday morning.We talked about my first ghostly encounter when I moved to Tennessee where I spent three days and nights in a haunted house. She suggested I post about and I will soon. There is something out there that is unexplained.

It's amazing how many people have ghost stories of one kind or another . . . I'm putting a ghost story in the book I'm writing now . . .

And I'm very glad to know I'm not alone when it comes to seeing ghosts!

Gorgeous chair. Do you ever sit still long enough to enjoy it? We had a haint at the house I grew up in in Candler. And another at my Mimi's Montford home. My mother was a ghost-hunter before it was popular--or profitable.

Welcome back, BB! I spend lots of time in that chair -- with my laptop. It's where I do all my writing.

I'm going to have to talk to you a bit about Appalachian witches and ghostes -- for the WIP.