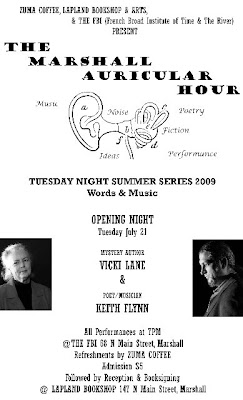 So -- big doings in our tiny county seat next Tuesday. This is a part of the burgeoning culture that is filling in some of the blanks of a town that, twenty years ago, pretty much shut down after six. There used to be a guy actually sweeping the downtown street with a push broom.

I'm glad I saw the old Marshall but I'm happy to be included in the new. And more than a little abashed to be paired with a poet of Keith's caliber. Hey, I'm just a paperback writer (cue music) while he, well I'm quoting here from the Marshall blog:

Keith Flynn is the author of five books, including four collections of poetry: The Talking Drum (1991), The Book of Monsters (1994), The Lost Sea (2000), and The Golden Ratio (Iris Press, Jan. 2007), and a collection of essays, entitled The Rhythm Method, Razzmatazz and Memory: How To Make Your Poetry Swing (Writer's Digest Books, Feb. 2007). Since 1986 he has served as lyricist and lead singer for the nationally acclaimed , The Crystal Zoo, which produced three albums: Swimming Through Lake Eerie (1992), Pouch (1996), and the spoken-word and music compilation, Nervous Splendor (2003). His poetry has appeared in many journals and anthologies around the world. He has been awarded the Sandburg Prize for poetry, the ASCAP Emerging Songwriter Prize, the Paumanok Poetry Award and was twice named the Gilbert-Chappell Distinguished Poet for NC. Flynn is founder and managing editor of The Asheville Poetry Review. For more info, please visit the website: www.keithflynn.net.

It should be interesting. They've asked me to read for twenty minutes and specifically requested that I read from the upcoming The Day of Small Things. So I've tried to pick out some good bits that make sense on their own and, I hope, won't embarrass me.

I wish all my blog friends lived nearer and could drop in, especially for the coffee and conversation after. 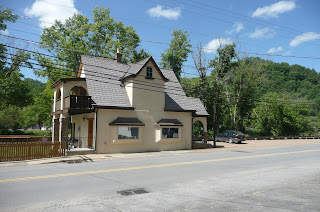 Well, I think I'll grab my sister in Petersburg Tuesday evening and come on down! Especially to hear the reading from "The Day of Small Things." Look forward to seeing you.

Well, to be fair to all your friends who CAN'T make it to Marshall, you could post what you read after the fact? :)
I'm sure everyone is like me and wanting to hear it too! Just a thought! * smiling *

I saw this advertised, and really wish I could be there. I'm hoping some of my family will be able to come. I'll be thinking of you Tuesday night!

Nancy -- Excellent! I'll be looking forward to seeing you. And I'll return the diaries to you. I have really enjoyed looking through them --and Inez and Odessa made it into the book!

That would be terrific if they could come, estaminet -- I'd love to meet them!

Oh, the auricular and other indulgences those lucky enough to be able to attend!

thus, I understand your comment on my blog about "au café Pompon "!
Congratulations! A great day for you and your readers ! Will you insert a (short ) video on your blog ?
"Auricular hour "is well chosen to hear poetry and literature .

Mmm. I don't think the event is being recorded. I'd love to try to make an audio of these selections -- they allow you to hear the language 'as spoke' by the older folks round here. I'll see what I can come up with.

Doesn't that sound like fun! Oh I wish I could be there, but, alas, it is too far. The ballad evening sounds lovely as well. Enjoy your reading, Vicki!

This is so exciting! (paperback wriiii-ter)

Oh, Vickie, you were so right. I LOVED the slide show. Gorgeous birds. I especially liked how she planted the glorious foliage to blend in with the chickens to protect them from the hawks. Brilliant.

Hi, Karen -- I know it's going to be fun. I'm actually quite proud of the selections I've chosen to read. And you're right -- the ballad evening is very enticing!

I KNEW you'd like that slideshow, Willow! Those chickens(I'm pretty sure)are Polish Crested -- we had some long years ago. And yes, her landscaping is gorgeous -- I do admit to wondering how she keeps the birds from pooping on the floor or furniture of that room -- mine aren't that polite.

And for anyone who wonders what I'm talking about, I'll put a link to this chicken slideshow in my next comment!

How wonderful Vicki! I wished I could come! I wish you a very happy evening! And please tell about it. I am looking forward to reading about it all.

Thanks, Reader Wil! I'll post an excerpt on Wednesday!