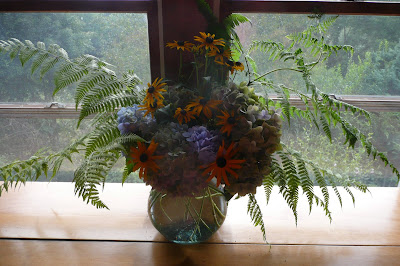 I love making flower arrangements -- though they're never much more than shoving a bunch of flowers into a receptacle of some sort -- certainly there's none of that garden club stuff with Hogarth's curve and the rule of three that my mother-in-law used to talk about. 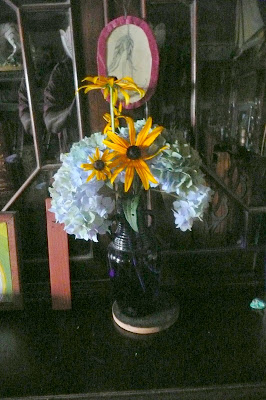 A friend of mine -- who grew up in the piedmont of North Carolina -- calls this 'making a flower pot' and once I realized she wasn't talking about potted plants, I remembered something similar from Thackery's Vanity Fair (a truly delightful book, by the way. 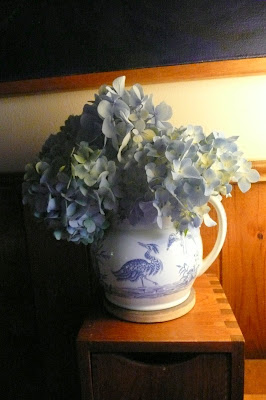 Vanity Fair was written in 1848-- in England. I wonder if 'flowerpot' and 'bowpot' are related. Have any of you heard either term used? 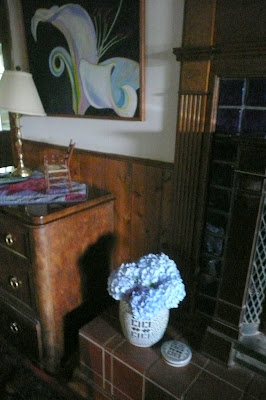 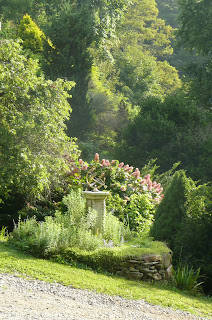 Click on the sundial for an early morning stroll.

I remember cut flowers brought inside being called a "flower pot." I especially loved it when Mom would bring in lilacs. I never cut flowers - not sure why...

I always enjoy your strolls. I like the crepe myrtle trunks as well. I have a white one in the side yard that the cicadas damaged terribly last year, but I think it's going to pull through. I was just thinking the other day that I should arrange some rocks around it. (We have no rocks, so we have to haul them in from Big Pine.)

And I love your blue bench! I've painted all the outdoor furniture this summer, and now have two gorgeous blue adirondack chairs. But I was outvoted when it came to the bench, so it's now gray.

This has been such a pleasant July - I'm gonna miss it.

Thank you, Phyllis! So it's a western NC expression as well -- I'll be sure to have Miss Birdie use it sometime!

Those crepe myrtles are pretty hardy. The first year I planted mine, a very hard freeze killed them -- as I thought entirely but a year later, they struggled back from the roots.

I love that blue as well -- but my Adirondack chairs are natural wood colored. I guess if everything were blue, it wouldn't stand out so.

And yes indeed on the weather -- a heavenly July!

I've not heard of the term flower pot or bow pot used for a fresh flower arrangement. Interesting. LOVE your hydrangeas in the blue and white!!

Vicki, your flower arrangements are gorgeous. I've got to get a new, more appropriate vase for our Zinnas that we just picked from our garden. I love fresh flowers. When I was growing up my mother always had an arrangement of fresh flowers on the table beside our bed.

When you get a chance, drop by my kitchen. I have something special for you.
Sam

Hi, Willow -- I love the blue and white -- it's an ongoing theme but I pull out even more of it in the summertime -- so cooling.

Hey, Sam -- Zinnias are so cheerful. I'm kicking myself that I didn't grow any this year. I like them in an enamelware pitcher -- kind of country. (Made your corn cakes again last night - third or maybe fourth time. Yumm!)

I don't know either word, but sometimes a language becomes really funny when words are misptonounced, like bouquet and booky! I enjoyed reading Vanity Fair!

My mother never liked flowers, so she never planted any, which made our house look quite boring. My mother-in-law, on the other hand, had quite a green thumb and shared her knowledge with me and I have flowers planted about everywhere I can put them and love to bring them inside and enjoy them that way too.

Reader Wil -- I live in an area where I had to learn what people meant, they pronounced things so differently. For example, araound here 'wire' (with an I sound) is pronaounce 'wahr.' Took some getting used to.

Pat -- I'm having trouble imagining someone not liking flowers. Not having the time or inclination to mess with them, I understand. Or being allergic, maybe. Or just indifferent. But actually not liking them?

Good grief -- sorry about those typos in the last comment! Make that 'around' and 'pronounced.'

I've never heard either of those terms. And, I'm ashamed to say, I've never read Vanity Fair! I must remedy that...

I love your blue and white arrangements! We always had bouquets all over the house when I was growing up. Mama could grow anything with ease, but me...I struggle!

Hey, Victoria, VANITY FAIR is one of those books I read for a class in college and loved so much that I re-read it periodically. Great characterizations and sly humor!