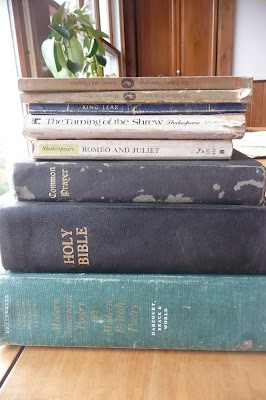 Pat Browning, another mystery author and an email friend, recently posted a list of 25 books that had influenced her -- and, for better or worse, included my own Signs in the Blood. That got me to thinking about my own list -- I couldn't resist and here it is.

Taking it from the top, the language of the Bible, the Episcopal Book of Common Prayer (the non-modernized one), Shakespeare, and many of the poets is responsible for my fascination with words. I have a pretty good memory and I'm fond of quoting, as many of you know. But in my books I have to restrain myself to the older, out of copyright works. So I'm fortunate to have all these beautiful words dodging about through the winding corridors of my mind. 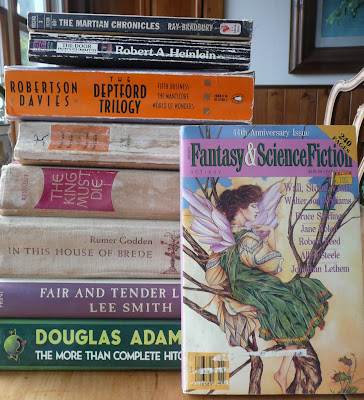 As a high school student, I was a great reader of science-fiction. I loved Ray Bradbury for his rich poetic language and lovely descriptions, as well as his thoughtful take on important themes. Robert Heinlein was another favorite -- even then, I think I knew his writing was a tad clunky and but, oh my, could he tell a story!

Historical fiction was my next passion. The ability of an good author to transport the reader in time and space is typified by Mary Renault. (Thanks to her, I'm convinced that I know ancient Greece.) The subplots in my books are the dipping of my toe into the stream of historical fiction. One day, who knows, I may take the full plunge.

Douglas Adams is just one of the many Silly Brits I have read, delighting in their way with a word. P.G. Wodehouse is the master, Adams and Neil Gaiman are close behind. And Monty Python -- all of them. I can't aspire to write like these guys, being neither silly nor a Brit, but I suspect there's some carry over into what I do.

Rumer Godden's In this House of Brede is, I'm sure, the origin of my use of internal monologue and Lee Smith's Fair and Tender Ladies is at least the godmother of Little Sylvie.

Robertson Davies is someone I'd like to write as well as. Add John Fowles, Jane Austen, Ann Tyler, Barbara Kingsolver, Margaret Atwood . . . 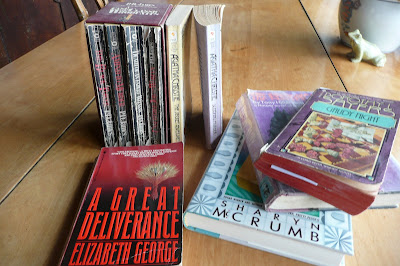 My influences from the mystery world would be my early favorites -- Agatha Christie and Dorothy L. Sayers, followed by P.D. James. For a long time I read only British mysteries, but then I discoved Sharyn McCrumb and Tony Hillerman. And when I was working on the rewrite of my first book, my editor sent me a copy of Elizabeth George's first book as an illustration of the sort of thing she was looking for in terms of plotting. 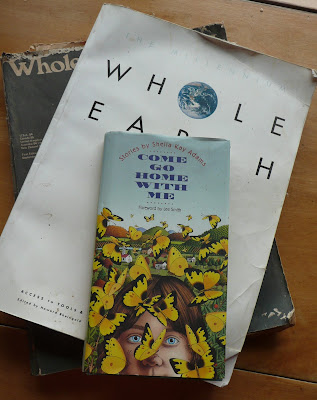 The Whole Earth Catalog, was, in large part responsible for our moving to the mountains and taking up the farming life. That's influential!

Last of all, when my friend Sheila Kay Adams just up and wrote Come Go Home With Me and it was published with a foreword by Lee Smith, something began to simmer and fizz in my mind. I can do that, I thought.

Is that twenty-five? Who's counting? (Math is so over-rated, as my younger son once told me.) -- and I know I've left out at least twenty-five more.

I'd love to hear what books have been important in your lives . . .
Posted by Vicki Lane at 7:04 AM

Labels: another meme, books in my past

Making a list of this sort always leaves me stuttering and stammering and looking like a deer in the headlights at the thought of having to choose. But I was considering my daughter's choices and favorites and it got me thinking of the books I remember most vividly from my childhood - Little Women, The Secret Garden, the Little House series, an intense month-long romp thru all of the Hardy Boys, and later The Lord of the Rings. I was contemplating how some themes and genres remain in my lexicon while others have fallen by the wayside, and some have been added.

Vicki, this has set me thinking, because like Karen, I feel like a deer in the headlights when people ask me this sort of thing in the q & a after a reading, or in a class. I stutter and stammer. Well, there's Wordsworth, Keats--but they want to know which poet I'm reading NOW. And then I get confused because I have so many books of poetry scattered around my house that I can't remember! I should just tell them to go to my laureate blog, right? But maybe I'll do a post similar to yours. I might at least be nudged into cleaning/organizing my books!

Ah, Karen, Little Women and The Secret Garden were and are great favorites of mine. Wouldn't you ADORE to stumble into a place like the secret garden and start bringing it back to life? And the scene where they ate baked potatoes with clotted cream set up such a longing in me that eventually, back when we had a cow, I learned to make my own clotted cream.

Willow -- there is very little in own house that isn't well loved, well worn, and mellow. I read all over the place: while I'm cooking, bathing, eating, doing dishes, and it shows on the books.

Okay, that's it! The clotted cream comment has tossed me over the edge. The next time I'm in NC I will be found at your doorstep clamoring for homemade clotted cream for my potato.

Good food, good books, life is very good. AND my crocuses have started blooming! So nice to finally have a little color besides shades of gray, brown and tan.

No clotted cream just now, Karen -- we haven't had a milk cow in about ten years. (But we are going to look at a Jersey heifer next week . . .stay tuned . . . there may be clotted cream in our future)