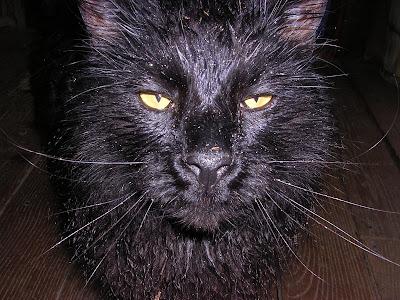 I almost had to look at the date to make sure it wasn't April Fools' Day.

Paying millions in bonuses to the same clowns who have put a company into the position of needing billions in bailout . . . and why? So that they can retain the services of said clowns.

WASHINGTON — The American International Group, which has received more than $170 billion in taxpayer bailout money from the Treasury and Federal Reserve, plans to pay about $165 million in bonuses by Sunday to executives in the same business unit that brought the company to the brink of collapse last year.

Word of the bonuses last week stirred such deep consternation inside the Obama administration that Treasury Secretary Timothy F. Geithner told the firm they were unacceptable and demanded they be renegotiated, a senior administration official said. But the bonuses will go forward because lawyers said the firm was contractually obligated to pay them.

The payments to A.I.G.’s financial products unit are in addition to $121 million in previously scheduled bonuses for the company’s senior executives and 6,400 employees across the sprawling corporation. Mr. Geithner last week pressured A.I.G. to cut the $9.6 million going to the top 50 executives in half and tie the rest to performance.

The payment of so much money at a company at the heart of the financial collapse that sent the broader economy into a tailspin almost certainly will fuel a popular backlash against the government’s efforts to prop up Wall Street. Past bonuses already have prompted President Obama and Congress to impose tough rules on corporate executive compensation at firms bailed out with taxpayer money.

A.I.G., nearly 80 percent of which is now owned by the government, defended its bonuses, arguing that they were promised last year before the crisis and cannot be legally canceled. In a letter to Mr. Geithner, Edward M. Liddy, the government-appointed chairman of A.I.G., said at least some bonuses were needed to keep the most skilled executives.

“We cannot attract and retain the best and the brightest talent to lead and staff the A.I.G. businesses — which are now being operated principally on behalf of American taxpayers — if employees believe their compensation is subject to continued and arbitrary adjustment by the U.S. Treasury,” he wrote Mr. Geithner on Saturday.

Still, Mr. Liddy seemed stung by his talk with Mr. Geithner, calling their conversation last Wednesday “a difficult one for me” and noting that he receives no bonus himself. “Needless to say, in the current circumstances,” Mr. Liddy wrote, “I do not like these arrangements and find it distasteful and difficult to recommend to you that we must proceed with them.”

An A.I.G. spokeswoman said Saturday that the company had no comment beyond the letter. The bonuses were first reported by The Washington Post.

The senior government official, who was not authorized to speak on the record, said the administration was outraged. “It is unacceptable for Wall Street firms receiving government assistance to hand out million-dollar bonuses, while hard-working Americans bear the burden of this economic crisis,” the official said.

Of all the financial institutions that have been propped up by taxpayer dollars, none has received more money than A.I.G. and none has infuriated lawmakers more with practices that policy makers have called reckless.

The bonuses will be paid to executives at A.I.G.’s financial products division, the unit that wrote trillions of dollars’ worth of credit-default swaps that protected investors from defaults on bonds backed in many cases by subprime mortgages.

The bonus plan covers 400 employees, and the bonuses range from as little as $1,000 to as much as $6.5 million. Seven executives at the financial products unit were entitled to receive more than $3 million in bonuses.

Mr. Liddy, whom Federal Reserve and Treasury officials recruited after A.I.G. faltered last September and received its first round of bailout money, said the bonuses and “retention pay” had been agreed to in early 2008 and were for the most part legally required.

The company told the Treasury that there were two categories of bonus payments, with the first to be given to senior executives. The administration official said Mr. Geithner had told A.I.G. to revise them to protect taxpayer dollars and tie future payments to performance.

The second group of bonuses covers some 2008 retention payments from contracts entered into before government involvement in A.I.G. Indeed, in his letter to Mr. Geithner, Mr. Liddy wrote that he had shown the details of the $450 million bonus pool to outside lawyers and been told that A.I.G. had no choice but to follow through with the payment schedule.

The administration official said the Treasury Department did its own legal analysis and concluded that those contracts could not be broken. The official noted that even a provision recently pushed through Congress by Senator Christopher J. Dodd, a Connecticut Democrat, had an exemption for such bonus agreements already in place.

But the official said the administration will force A.I.G. to eventually repay the cost of the bonuses to the taxpayers as part of the agreement with the firm, which is being restructured.

A.I.G. did cut other bonuses, Mr. Liddy explained, but those were part of the compensation for people who dealt in other parts of the company and had no direct involvement with the derivatives.

Mr. Liddy wrote that A.I.G. hoped to reduce its retention bonuses for 2009 by 30 percent. He said the top 25 executives at the financial products division had also agreed to reduce their salary for the rest of 2009 to $1.

Ever since it was bailed out by the government last fall, A.I.G. has been defending itself against accusations that it was richly compensating people who caused one of the biggest financial crises in American history.

A.I.G.’s main business is insurance, but the financial products unit sold hundreds of billions of dollars’ worth of derivatives, the notorious credit-default swaps that nearly toppled the entire company last fall.

A.I.G. had set up a special bonus pool for the financial products unit early in 2008, before the company’s near collapse, when problems stemming from the mortgage crisis were becoming clear and there were concerns that some of the best-informed derivatives specialists might leave. It locked in a total amount, $450 million, for the financial products unit and prepared to pay it in a series of installments, to encourage people to stay.

Only part of the payments had been made by last fall, when A.I.G. nearly collapsed. In documents provided to the Treasury, A.I.G. said it was required to pay about $165 million in bonuses on or before Sunday. That is in addition to $55 million in December.

Under a deal reached last week, A.I.G. agreed that the top 50 executives would get half of the $9.6 million they were supposed to get by March 15. The second half of their bonuses would be paid out in two installments in July and in September. To get those payments, Treasury officials said, A.I.G. would have to show that it had made progress toward its goal of selling off business units and repaying the government.

The financial products unit is now being painstakingly wound down.

All I can say is that it is comforting (in a peverse sort of way) to find absurdities like this happening in all parts of the world!

Thank you for my fabulous Award! posted it up today and had quite a bit of fabulous fun!

We're all in this handbasket together!

I was watching The View this morning and have to agree with Joy. They're saying they need these bonuses to keep the "best and brightest." If those who have messed the company up are the best and brightest, give me the worst and dumbest.

They may have a contract with those people, but things have changed. They need to get with them and renegotiate or something. What about the "little" people in the company who are just trying to put food on the table?

Yep, we're in this handbasket together, and the people carrying it need to stop shaking it up so much. I'm getting motion sickness.

Vicki, I am furious about all this. Isn't there a law regarding misuse of public funds? These ARE, after all, public funds. OUR public funds. ruh roh - there goes my blood pressure . . .

Well, the most recent article on this on cnn.com says President Obama is attempting to block those bonuses. Nice to know the government is paying attention. I just wonder if there is anything he, or anyone, can do about it.

I just try to keep in mind what my mother used to always say: What goes around comes around.

The fact that I'm organizing my stuff for taxes today doesn't help my feelings any.

HOW DARE THEY! HAVE THEY NO SHAME?

Obviously, the government wasn't "paying attention" or they would not have released these funds to AIG in the first place.

As my husband said yesterday, the shareholders were the ones to whom these "best and brightest" were supposed to be responsible, and the shareholders and taxpayers should hold them accountable. The shareholder are supposed to "own" the company not be screwed by it. But the ones running the country for 8 years cared nothing about accountability, especially if it protected folks like us. I agree with Susan--if this represents the "best and the brightest, give me the worst and dumbest. Couldn't do any worse.
All one has to do is look at what's going on around WCU to see the same corporate mindset at work.
Vicki, of coure they have no shame. As F.S. Fitzgerald said, The rich are not like you and me.

Newest bit of interesting info on this AIG mess: seems the bonuses didn't work. Eleven of the "best and brightest" took their huge bonuses and left the company.

Sure would love to hear that at least one of the recipients had an attack of conscience and turned down their bonus.

Someone who can trace his/her personal financial ruin to AIG decides he/she has nothing to lose and devotes his/her life to tracking down every exec who took a bonus.

The first victim is discovered in his BMW, suffocated to death. His mouth and nostrils are stuffed with wadded cash. A note at the scene explains the avenger's plan.

Execs as yet unharmed scramble to return their bonuses to the government.