The Hummers Are Coming! 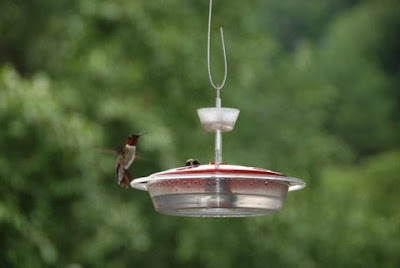 Or they may already be there, depending on your location. Here in the eastern US, we have only the Ruby-Throated variety, but they're a delight to behold. First the males appear and several weeks later, the females. And then they court and do their loopy little sky dance and squabble over the feeders and generally entertain us till Fall. 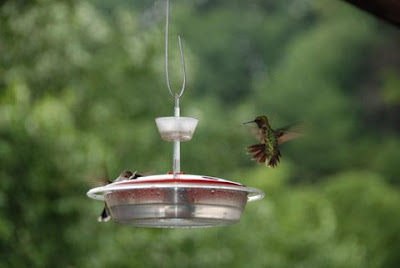 The reason I bring this up now is this nifty link, sent to me by Liz G. It will take you to a map where dots mark first sightings of returning hummers. (As of Sunday night there had been a sighting in northern Louisiana.) The sightings are emailed in -- reported by folks like you and me.

The map is only for the Ruby-Throated's range (online it extends into Canada.) But the site is full of pictures and lots of good information about humming birds in their many varieties.

Personally, I find it fascinating to watch the dots creep northward. 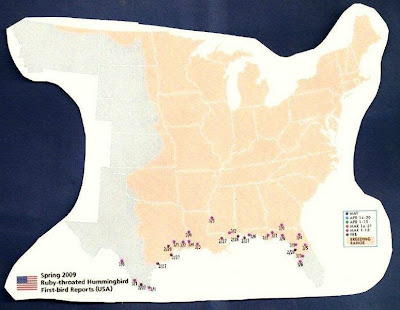 I don't really remember exactly when the hummers return to our area -- early to mid-April, I think. But I'll be waiting to add my dot to the map!

Full disclosure: These humming bird pictures aren't mine -- my friend Vic made them last year on our front porch with his super-duper camera.

Thanks, Liz, for the link! 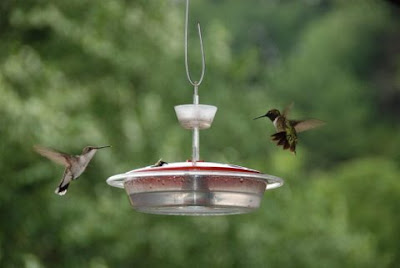 Hey, Vicki,
That's a pretty neat site. Our friends put up their feeders Saturday after spotting some hummers and said they wrapped them up! I haven't gotten ours cleaned up yet as they usually don't get here till April but it's on my list! Those are super pics!

Aren't they the most fascinating little creatures??

Hey, Kaye and Carol -- I just put a feeder up after catching a glimpse out of the corner of my eye of Something flying very fast. Probably not a hummer but I want to be hospitable, should guests arrive early.

There have been years when I didn't get the feeder out in time and the little guys have buzzed at the dining room window while I was eating lunch, as if to say, "Well?"