A Book And Its Cover 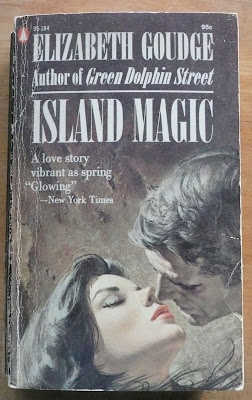 I'm a long-time fan of Elizabeth Goudges's novels. I own and have read and re-read most of them -- Green Dolphin Street, The Rosemary Tree, The Scent of Water, The White Witch, The Child from the Sea, to name a few. Some are historical; others were contemporary -- the Eliot family saga is set in the thirties and forties. I read them as much for the lush descriptions as for the stories -- which are fairly romantic -- though these are a long way from "romance novels," (said she, drawing her skirts aside.)

So imagine my chagrin when the paperback above showed up among the older books I'd requested for my birthday. I'd asked my husband to get me a copy of Goudge's first novel, written in 1934. I'd never read Island Magic and was thrilled at the thought of a new Elizabeth Goudge to read. (And having just typed that, I wonder if my choice of Elizabeth Goodweather as a name was influenced by my long-time admiration for another E. G.?)

I digress. The book is long out of print and a hardback copy costs eighty to ninety dollars. I'm not a Collector; I'm a reader, so what I got was a mass-market paperback reprint -- which originally sold for ninety-five cents but was available now -used -- for 11.95. Plus shipping and handling.

But the cover! Oh my goodness, the cover! If I'd been in a public place, I'd have had to hide it, it is so much Not the Sort of Book I read.

Except that Island Magic isn't at all like that. The cover portrays a single, never repeated moment -- the book is more about family and children and love and sacrifice than Romance. I suppose the cover was a marketing decision. 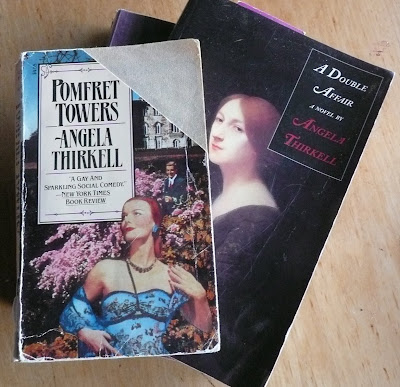 Also among my reading pleasures are the novels of Angela Thirkell -- who is a kind of Twentieth Century Jane Austen. Here's another example of marketing choosing covers without reading the book. This dramatic wench in blue bears no resemblance to anyone in the book, which is peopled by a lovely clutch of hard-working, somewhat shabby aristocrats and upper class Brits, as well as a smattering of the lower classes in all their cheerful variety.

Recently, thank goodness, the Thirkell books have all been reprinted in elegant trade paperbacks with covers taken from paintings -- much more suitable. And I don't have to hide the covers. 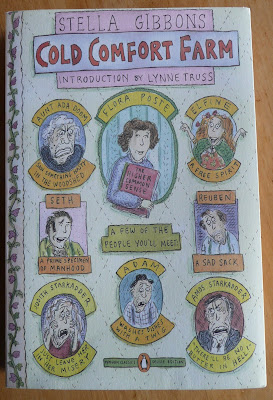 Now here is a perfect match of cover and book. This reprint of Stella Gibbons' hilarious spoof sports a cover by the incomparable Roz Chast. Only she could do justice to the quirky denizens of Cold Comfort Farm.

If ever you were made to suffer through Thomas Hardy's gloomier works of life and death and misery in the English countryside, this will take the nasty taste away! And if you remember the purpler part of D.H. Lawrence's prose, in which all of nature is tumescent and waxing and burgeoning, well, Cold Comfort Farm should give you a reminiscent giggle. 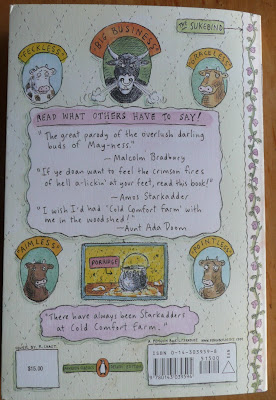 I was also an avid Elizabeth goudge fan when I was a teenager. I have a lesser known work on my self: God so loved the world: A life of Christ. It is beautifully written. Elizxabeth Goudge's father (if I remember correctly) was the Dean of Gloucester.

I didn't realize Elizabeth Goudge wrote mostly adult books. We have Linnets and Valerians, which I adore, as well as The Little White Horse, but now I shall have to see if I can track down others by her.

Eleanor--re Dean of Gloucester -- that would fit as EG wrote in several books (City of Bells, The Blue Hills) of life in a cathedral close. She is an amazing writer -- I return time and again for her settings. Rosamund Pilcher has a similar effect on on me.

Karen -- there are lots of adult books. I'm trying to name a favorite and struggling. THE WHITE WITCH is a beautiful historical set during England's Civil War, The Child from the Sea is about the same time period. I think the one I re-read most often are the contemporary novels -- by which I mean mid-Twentieth century. THE SCENT OF WATER. THE ROSEMARY TREE PILGRIM INN, THE HEART OF THE FAMILY, CASTLE ON THE HILL -- I do love these.

A warning: the theme of self-sacrifice runs through many of EG's books -- it may not be to modern tastes.

Thanks, Vicki! I just did an online search of our library (LOVE that I can do that!) and they have 17 of her books. Libraries must be among one of the world's greatest inventions.

Hello, I love Elizabeth Goudge too. My favourite is The Herb of Grace. I wrote to her once to tell her how much I enjoyed reading her books, but she had already died. I got a nice reply from her companion. Have you read her autobiography, The Joy of the Snow?
Blessings, Star

ps The Dean's Watch was set in the cathedral city of Ely in Cambridgeshire, England. I lived there myself for two years and often saw the house where Elizabeth lived.
Blessings, Star

Hello, Star! I think I read either a biography or an autobiography years ago but don't remember the title.

I love all the books about the Eliot family and the inn called The Herb of Grace is where I'd like to live.

Re writing dead authors -- I had a similar experience. When C.S.Lewis died, I realized how much his writing had meant to me and felt bad that I'd never written to tell him so. So I wrote his brother and had a lovely reply in minuscule handwriting.

I received recognition from emptynestevolution.blogspot.com for this blog in the form of a "Fabulous Blog Award". I really appreciate this and am paying it forward.

Here are my five picks:


The rules: You must pass it on to 5 other Fabulous Bloggers in a post. You may find their email addresses on their Profile page or, if not available, post as a "Comment" to their latest post. You must include the person that gave you the award, and link it back to them. You must list 5 of your Fabulous addictions in the post. You must copy and paste these rules in the post. Right click the award icon & save to your computer then post with your own awards.

To my way of thinking, this is not only a nice tribute, it widens the reading audience.

5 Fabulous Addictions (not in any particular order)

Thank you, Star! How nice of you! I'll post my picks tomorrow!

Vicki, Elizabeth Goudge is one of my favorites, too, although I hadn't thought of her in a long time. So when I saw that cover pic it gave me quite a turn, since I've never been a reader of romance novels. I'm going to have to get the ones I have and re-read them.

And...thank you so much for adding me to your Blog Roll! That put a smile on my face that will probably last until the end of Summer :)

Victoria, I'm enjoying a taste of California through your gorgeous photos. (I was born there -- in Indio -- a military accident -- but was taken back to Florida when I was six weeks old and have never returned to the land of my birth . . .)

So glad to find another Elizabeth Goudge fan!