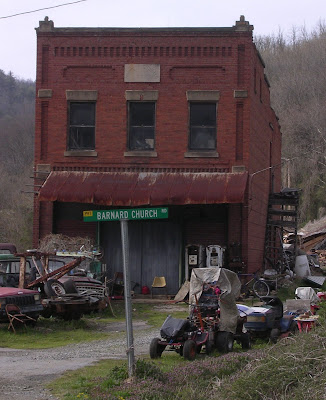 Gudger's Stand in Elizabeth's Marshall County is a little collection of derelict buildings clustered by the bridge. Here, in Little Sylvie's time, would have been a depot (the train tracks lie just to the left) and this red brick building would have housed a general store. This building, by the way, is the origin of the name Gudger's Stand -- on that light colored plaque above the middle window is the name of the builder -- a Mr. Gudger.

In the upcoming In a Dark Season, this building is the home to the mysterious Thomas Walter Blake the Fifth -- aka The Troll. (In our world, the building is uninhabited and its back wall half gone. )

"... but the Troll was nowhere to be seen. Elizabeth studied the dilapidated brick building that was presumably his home. Or his lair. Once a prosperous mercantile concern, the business had closed long before she and her family had moved to the county. Birdie said she used to shop there in the forties but it closed when the passenger trains quit running. And that old guy has been hanging out there -- I guess living there -- as long as I can remember.

"She cast a dubious eye at the rusting cars and trucks resting on blocks in front of the old building. The sight of an enormous tabby cat perched on the hood of a battered old pickup should have been reassuring but instead seemed somehow ominous. As if it's lying in wait for someone.

The building's ground floor windows were covered with plywood, but a curl of smoke from a stovepipe protruding from the flat roof hinted at warmth within. At one of the upper windows, a movement caught her eye, a figure moving past the glass."