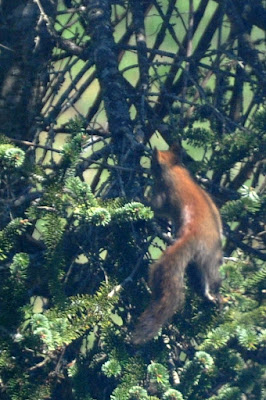 Not a Baby Boomer (they're not what you'd call elusive) but a Mountain Red Squirrel, also known as a Boomer.  Justin spotted one a few years ago down at the lower place and I seem to remember seeing one at our bird feeder many years ago and thinking it was a regular Grey Squirrel who'd been through hard times. 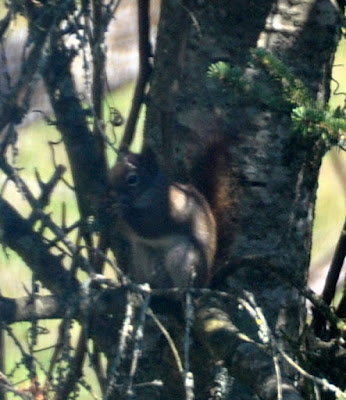 But now we have a Boomer as a regular visitor. He (or she) is much smaller than a Gray Squirrel -- half a pound as compared to two pounds -- with a shorter tail, reddish fur,
and white circles around his eyes. 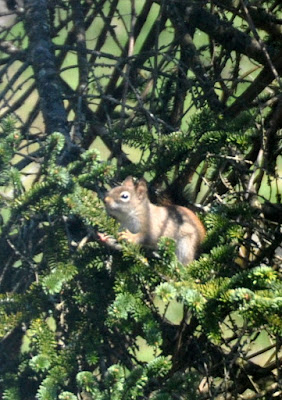 He visits the bird feeder but spends a lot of time in the big Fraser Fir ( a Christmas tree from about forty years ago.) 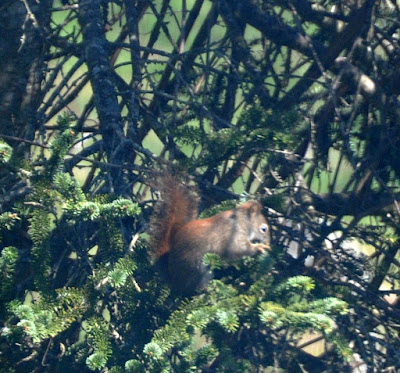 He runs out to the end of a branch and harvests some new cones . . . 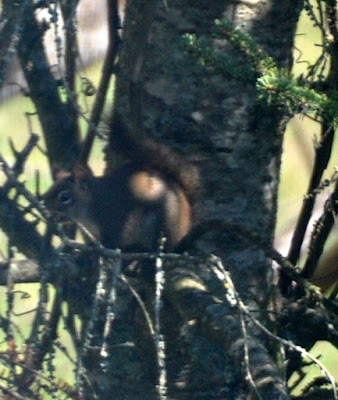 Then retires to the relatively hidden perch near the trunk.  He moves quickly and if I'm not careful to stay still, he disappears.
I tried for days to get a clear shot  but these are the best I could manage. There are better pictures (by someone else) HERE. 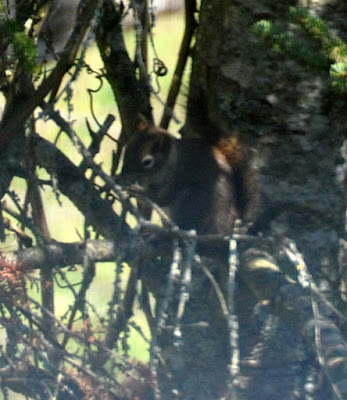 Perhaps in time he'll get used to us and I'll get better pictures.  No matter -- it's just fun to see a new critter around -- an addition to the Gray Squirrels and Flying Squirrels. 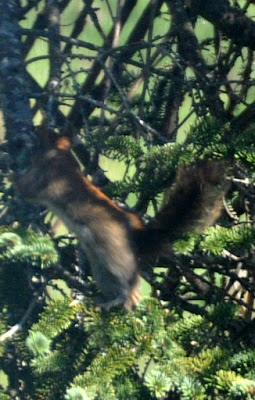 I love to watch the squirrels eating the pine cones. They sit in our pine trees and all the stuff just rains down everywhere. Then they drop what's left of the cones, like a stripped corn on the cob.

He's really cute Vicki. We used to have red squirrels like that here in England. They are the indigenous species here and were exclusive in days gone by. However the North American grey squirrel has taken over here and crowded out the red squirrel, which as you say, is smaller (and more cute). The red squirrel is mostly confined now to Scotland although big efforts are being made to reintroduce them in other parts of the country. Enjoy your squirrel. I hope he stays.

The size sounds like the red squirrels that we find in some forests around here. They are very quick and nimble. I am very surprised to learn of one way down there if that is in fact what it is.

How very cool that you've got this new arrival to keep an eye on. Do you think that perhaps there might be more than one Boomer around? Please keep us posted, Vicki. xo

We've never seen a Red Squirrel in the ten years we've been here. Interestingly enough we recently saw a squirrel that must have been a mutant Red Squirrel. Body much smaller than gray squirrel. Color mostly gray but with a prominent red streak down its back, a red face and the hallmark red tail of the Red Squirrel. Weird looking thing. I would have thought it a hybrid, but a bit of research tells me that's not possible. It's quite skittish but I hope to get a photograph.

Oh a new species to photograph! What fun! Keep working on befriending him/her. So glad you ran into it.

I never knew we had a red squirrel here. Will know to look for it. What we lack in red squirrels, however, we make up for in chipmunks!