Don't Throw That in the Compost! -- Candied Citrus Peel 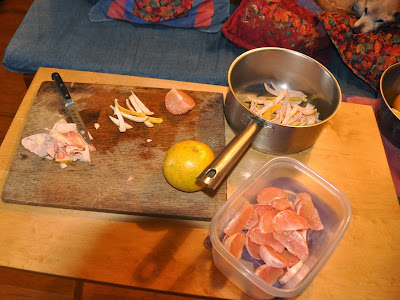 I am known to be somewhat cheap  frugal -- so it was with great delight that I discovered this easy (though a bit time-consuming) way of making that investment in sometimes pricey citrus stretch a bit more.

Now that that good tomatoes aren't available, we like grapefruit sections in our salad and I was about to toss the peels into the compost when I remembered going with my grandparents many, many (65-ish) years ago to a shop on the road by an orange grove that sold citrus and various citrus products. I remembered two old (ha) ladies dredging peels in sugar. . .

and I found a recipe in the Tampa Junior League's Gasparilla Cookbook. 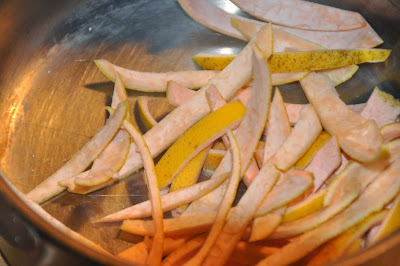 You begin by removing the peel and slicing it into strips. What you see in these pictures is the product of four small grapefruit -- as well as the hulls from two oranges and three lemons (previously squeezed for juice and set aside in anticipation of transformation.) 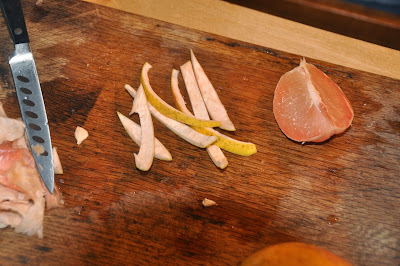 Put the sliced peels in a big pot, cover with water, and bring to a boil. 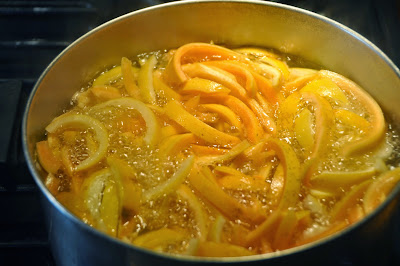 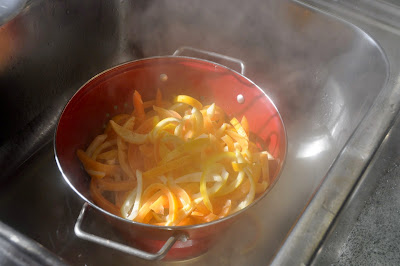 After the third draining, return to a wide bottomed pot, add water (say four cups) and sugar (two cups)  and bring to a boil. You can adjust the amount of water and sugar to just cover the  peel -- as long as you maintain the 2:1 ratio. 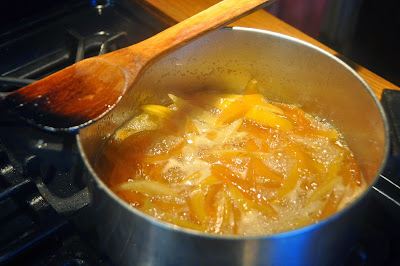 Boil till there is only about a tablespoon of liquid left. Stir frequently. Near the end, there may be some browning -- no worries, the browned bits taste good. But don't overdo it. 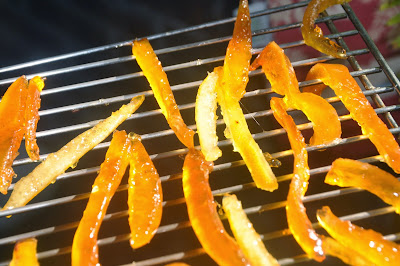 Put on a rack to cool. I separate the pieces (a tedious, fiddly, and sticky operation that involves long tweezers.) 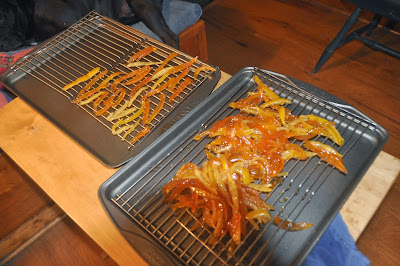 Then I roll them in granulated sugar -- and this pretty much has to be done one strip at a time, pressing into the sugar or it won't stick well. 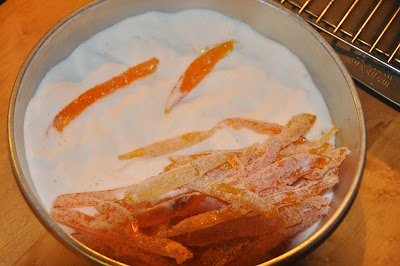 I don't really have a sweet tooth but I find these kinda addictive -- I made a flourless chocolate cake for our anniversary dinner the other night that I served with a raspberry puree-- the next day I tried a piece with one of these strips cut up and sprinkled atop -- oh, my!

Now I'm thinking a nice thing to do would be to coat one end of each strip with melted chocolate . . . I wonder if those old ladies at the citrus shop tried that? 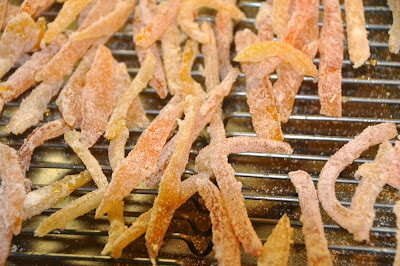 I bet that smelled great while it was boiling! If I am ever able to eat sweets again, this would be right up my ally, especially with chocolate! Dayum, woman!

Never tried with grapefruits... either with chocolate. I keep it in mind.
If I had one picture to choose to illustrate the recipe I would choose the Nr 2.

I love candied orange peel but have never attempted to make it. How do you store them? And how long can they be stored? I think it would make great gifts for neighbors.

NCMountainwoman -- the cookbook says that, stored in an airtight container between sheets of wax paper, they keep up to three months at room temperature. I don't know if this would be true for the chocolate dipped one.

Sounds time-consuming but satisfying - and yummy. I doubt they'd need to last 3 months in store in my house - especially if chocolate dipped!

We had to give up our grapefruit addiction because grapefruits and Jim's colesterol meds don't play well together. But I'll bet this work work well with orange peels. Might have to give it a try!

Those would make a heckuva Christmas gift for officemates, you know that? Dipped in chocolate . . . imagine seeing something like that in a little specialty shop . . . and think about what it would cost!

I remember my mother making candied orange peel ONCE. I loved it, and, in fact, just about made myself sick with eating it.

Those sound delicious! Alas, I would never go to all that time and effort to make them … but I can guarantee I'd buy 'em. ;-o