One of the things I warned folks in my workshop to avoid was Talking Heads.

Talking Heads occurs when there is a long stretch of dialogue during which we don’t ‘see’ the speakers. In this conversation below, there are only TAGS.  Tags tell us who said what and even how they said it but we still don't really 'see' the speakers.

“Ice-skating? Or shall we go to the rodeo?”

“Boring,” Tom groaned. “Let’s take the hovercraft over to the island.”

“Oh, no, there are eels in the hovercraft! Why don’t we work on adapting Handel’s Messiah to ragtime.” 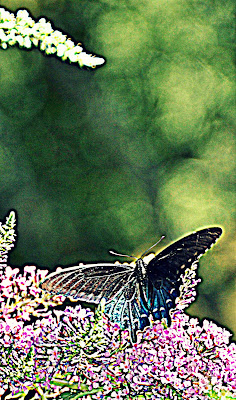 Sprinkle a few BEATS (phrases describing the speaker's actions) into this same dialogue and we can find out what’s really going on.:

***
“So what do you want to do?” Alice ran her finger along Tom’s well-muscled arm.

He caught her hand in his, brought it to his lips, and nibbled gently at her fingertips. “I don’t care.”

Alice managed a breathless whisper. “Ice-skating? Or shall we go to the rodeo?”

“Boring,” Tom began to stroke her thigh, letting his hand creep a little higher with each pass. “Let’s take the hovercraft over to the island.”

“Oh, no, there are eels in the hovercraft!” Arching her back, Alice began to move to the rhythm of his caresses. “Why don’t we work on adapting Handel’s Messiah to ragtime?”

Tom looked up from removing her lacy panties. “We already did that last week.”
***

Much more visual, don't you think? 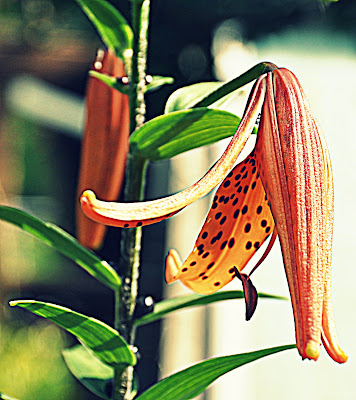 Layers of richness. I guess the trick is, knowing where to stop.

Excellent advice. And gorgeous photos. I like the work you are doing with your photos! intriguing. Adds a level like adding physical actions add to dry dialogue.

I agree with Kath - love what you're doing with your photos!

Yes! It's an art to create realistic and wonderful dialogue! But it's easy once you have that aha moment. :-D

Hey, great dialog...makes me think they are underwater in order to have eels in the hovercraft...the last time I checked eels needed to be in water. SO my imagined environment really switched a few times (cold, then dusty) with the dialog, even before the speakers were making out. I'm a visualizer. Thanks for the fun.

Methinks your next book might be a bit more racy. :)

Thanks for sharing. The photos have had some work done by invisible fingers for us but we know they are Yours... :-)

Yes indeedy! I could see that all right!

Thanks for the reminder of 'talking heads' ... and that first photo is breathtaking!

it def adds much more depth to the convo and it also moves the story along as well...and you are right...much more visual...

I recently finished a book that had long stretches of dialog without anything telling who at any point who was saying what. Drove me bananas. I'd think one person was talking, turns out it was another. ARRRRGGGGGGHHHHHHH!!!!

Thankfully, this was the author's first book (published many, many years ago) and she has since gotten much better.

Folks -- it'll be Sunday or Monday before I can come visiting. Number One son and wife are here tonight and we just had a big birthday dinner for him. And tomorrow I'm off to Rugby to do a talk. I'll be around eventually. . .

As a reader I appreciate the writer giving me written visual cues so I can create my own little mental movie of what is happening as I read.

I'm old enough to remember the days when there were books with beautiful artwork and the illustrations also helped tell the story. However, bad or poor artwork can also kill a story.

But I must say that I am a very forgiving reader as I helpfully add in my own visual cues to flesh out scenes if the author is a bit lax or ...gasp ... an editor cut too much?

Your writing flows so effortlessly. Lovely.

Such a lascivious lily!