The Hare With Amber Eyes 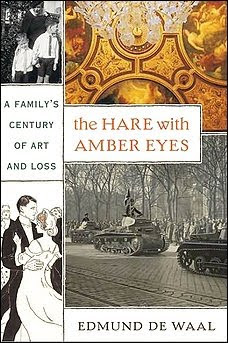 I really enjoyed this memoir.  And found it making me think about the layers of history all around us . . . something I'm addressing in my current proposal (not quite ready for Herself but close.)


Anyway, here's an excellent review of the book for background and then I'll add my thoughts below... see you there.

Amazon Best of the Month, September 2010: At the heart of Edmund de Waal's strange and graceful family memoir, The Hare with Amber Eyes, is a one-of-a-kind inherited collection of ornamental Japanese carvings known as netsuke. The netsuke are tiny and tactile--they sit in the palm of your hand--and de Waal is drawn to them as "small, tough explosions of exactitude." He's also drawn to the story behind them, and for years he put aside his own work as a world-renowned potter and curator to uncover the rich and tragic family history of which the carvings are one of the few concrete legacies.

De Waal's family was the Ephrussis, wealthy Jewish grain traders who branched out from Russia across the capitals of Europe before seeing their empire destroyed by the Nazis. Beginning with his art connoisseur ancestor Charles (a model for Proust's Swann), who acquired the netsuke during the European rage for Japonisme, de Waal traces the collection from Japan to Europe--where they were saved from the brutal bureaucracy of the Nazi Anschluss in the pockets of a family servant--and back to Japan and Europe again. Throughout, he writes with a tough, funny, and elegant attention to detail and personality that does full justice to the exactitude of the little carvings that first roused his curiosity. --Tom Nissley 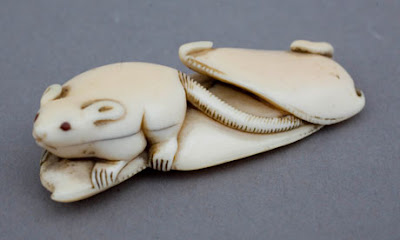 I love netsukes and posted about my very small collection here.  And the history of the Ephrussi's  collection provides the framework for this fascinating book. But the real story, as far as I was concerned, was what happened to this this wealthy, cultured family when the Nazis arrived and how quickly what had always been an undercurrent of ant-Semiticism became a tidal wave of terror.

I spend a little time in Vienna every day, thanks to Merisis's beautiful Vienna for Beginners
I love Merisi's photos of Vienna's gorgeous buildings, pastel against the blue skies, and the many architectural statues and gilded ornaments. It may be the most beautiful city in the world. 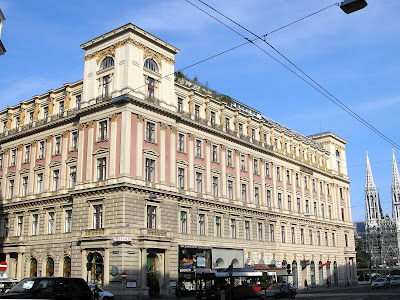 But after this book, I'll always be reminded of a terrible period in Vienna's history.
Almost every country has ugly things in their past -- the South's gracious antebellum plantations hide the brutal fact of slavery behind their romantic exteriors and the spear points I find in our fields remind me that this land belonged to the Cherokee before they were "removed."
The pink building pictured here is a casino in Vienna -- formerly the Palais Ephrussi -- the home of the netsuke collection and the Ephrussi family . . . before the Jews were removed. 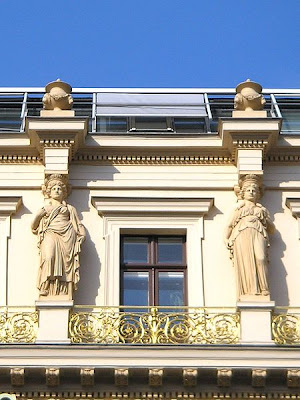 (All of the pictures are from the internet -- mostly from Wikipedia.)

I had never heard of netsuke before and now you have piqued my interest.
Yes many countries have ugliness in their past.

Certainly a book worth reading. Nice editorial you have provided I appreciate that. Sadly to say our human history is marred with terror and human cruelty.

warm wishes for a good week ahead.

Netsuke is new to me, too. The book sounds fascinating. If we still have a library, after the public service cutbacks, I'll try to get hold of a copy.

I remember one post of yours about netsukes and I found them lovely and very exquisite. It's terrible to lose such a collection. My father always bought beautiful things in China and Japan whenever he was there on his voyages. We lost everything when we were removed from our wonderful houses and had to go to the concentrationcamps. My mother carried a suitcase and we carried our own mattresses. Even my youngest sister, who was four, carried her own one. They were light and very thin, but we had to leave our toys and. for me even worse, my books.

i have seen this art before...and it is beautiful...and intriguing sounding read...

Found this post curious, had never heard of netsuke, but then reading the comments (as I always do!) - found Reader Wil's note positively chilling. I forget that there are those among us for whom these stories are more than just dreadful history lessons in a book or movie. Thank you for reminding us, Reader Wil.

For those of you who don't know about netsukes, I did a post about them a while back.

As Brenda noted, Reader Wil's comment is a good reminder...thank you, Wil. (For those of you who don't know Wil's story, her delightful blog is well worth a look. There's a link over in my sidebar.)

Honestly, Vicki, my memory is like a sieve these days. Now you have reminded me, of course, netsukes!

Delightful creations! And I learned something new -- always a good thing.

Thank you so very much, Vicki,
for mentioning my blog! Coursework is heavy right now, and with finals looming I hardly find any time to take pictures just for fun and create new blog posts.

I already have the book of my wish list a that Big Virtual Bookstore, ready to be ordered when I once again can indulge in reading fiction instead of textbooks.

I do not own any netsuke, but my mother does. Several her father bought in Occupation Japan. They have always been a source of wonder for me. What a wonderful possibility for the trail of ownership of something so dear.

and the word is pronounced 'netsky' isn't it. Yes, they are very interesting little objects and part of the Japanese clothing. I enjoyed reading about your book. It's a very different sort of read, isn't it. Glad you enjoyed it.