Dipping a Cautious Toe into Middlemarch 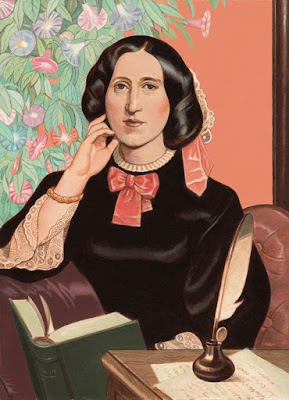 A while back one of my students from Tampa days (Cindy? Alicia?) posted an article on Facebook that referenced George Eliot's Middlemarch in a positive way. My memory of reading this novel is right there with my memory of Silas Marner -- which is to say, I hated it.

But that was a long time ago and Middlemarch is one of those works that always turns up on lists like 100 Books You Really Should Have Read.

As most of you know, I read a lot. But it's generally for pleasure.  So I decided I should challenge myself and fight my way through  give Middlemarch another chance. 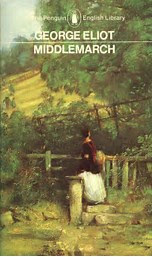 The opening was a little discouraging with the author asking (at some length) who among us, interested in the history of man, "has not dwelt, at least briefly, on the life of Saint Theresa, has not smiled with some gentleness at the thought of the little girl. walking forth one morning hand-in-hand with her still smaller brother, to go a seek martyrdom in the country of the Moors?"

Well, me, for one, I thought and closed the book, reconsidering my plan of challenging myself.

A week later, having beguiled the time with (among others) The Graveyard Book and a review copy of a book by another student, I almost picked up an Elmore Leonard paperback that's been on my bedside table for some time. But my conscience pricked me and I decided to give Middlemarch another chance.

The opening (Prelude) was still annoying but I forged on.

Chapter 1 was more  interesting, delineating Dorothea's character as a religious enthusiast "enamoured of intensity and greatness, and rash in embracing whatever seemed to her to have those aspects; likely to seek martyrdom, to make retractions, and then to incur martyrdom after all in quarter where she had not sought it."

But then I came to this delightful description of Dorothea:

"Riding was an indulgence which she allowed herself in spite of conscientious qualms; she felt that she enjoyed it in a pagan sensuous way and always looked forward to renouncing it."

Well,  I thought to myself, wry wit! We're in Jane Austen territory now. And I love Jane Austen. Read on!

And later, this exchange between Dorothea's sister and a neighbor:

"I am so sorry for Dorothea."

"Yes, she says Mr. Causabon has a great soul."

"With all my heart."

"Oh, Mrs. Cadwallader. I don't think it can be nice to marry a man with a great soul."

"Well,my dear, take warning. You know the look of one now; when the next comes and wants to marry you, don't you accept him."

I can absolutely see this on stage. On in a movie -- of which I believe there is one. So strange, I have no memory of finding this  book anything but tedious, much less humorous. Now I'm hooked.

I'll let you know how it goes. 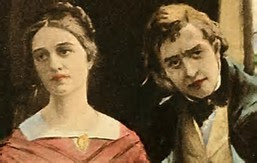 My book club is discussing this book tomorrow! If Irma doesn't make too much of a fuss. There are some wonderful characters, and she gets human nature.

Oh my, today I hear about a book which I've avoided. And it's the birthday of Franz Werfel, who wrote The Song of Bernadette, which was the most read book in 1941 which I also have never read. (It's also Mary Oliver's birthday.) But there are already too many books I WANT to read. Now you've challenged me to make an effort on some that don't call to me. Maybe, just for you...as an exercise in understanding writing better.

I don't think that you can persuade me. :)

Count me among the many who have started MIDDLEMARCH time and again and put it down time and again. Unless you can convince me otherwise, I will probably never read this book. But for some reason it remains on my library shelves. I subscribe to the "so many books, so little time" theory and won't spend time reading something purely because some list tells me I should. But I do have an open mind and look forward to your final review. You are one busy woman and if you use your valuable time reading this, perhaps I'll give it another try. Maybe.

Carol, I'd be interested to know what your book club thought.

It's been a long time, but I remember enjoying Middlemarch quite a bit. But then, I am one of those odd people who truly enjoys much of the writing of that period in British literature.

Just finished re-reading it yesterday! Nice to be able to sink my teeth into a great classic. Still haven't made it through Proust yet.

One of my top all time favorite books, though Dorothea is oft idiotic. Hope you stick.

Yup, have started it several times but never get very far. I look forward to your final thoughts on it. ;)