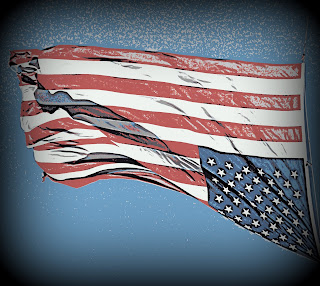 The mass shooting yesterday in San Bernardino was, according to THIS ARTICLE in The Washington Post, the 355th this year. By the time this posts, there may well have been another.

As I'm writing this on Wednesday around 11 pm EST, it's not clear if the shooters were foreign or domestic terrorists. One shooter has been identified as Muslim and the hatred ("Round them all up!") is already surging.

Funny, I didn't hear similar rhetoric about the recent Colorado Planned Parenthood shooter who has been identified as a Bible believer who felt all his sins would be forgiven.

I'm not sure it matters to the victims who are just as dead whether it was crazed ISIL supporters or crazed Americans with big guns and an agenda of some sort.

The simple fact is that guns, even military weapons of the sort designed for the sole purpose of killing a lot of people, are far too easy to obtain -- whoever you are.

And the response from many on the right? Again?

"Oh, and let's have a moment of silence and send our prayers."

Meanwhile, just hours before the San Bernardino shooting, a group of doctors delivered a petition to  Congress, urging a lifting of the ban that for almost twenty years has essentially blocked the Centers for Disease Control and Prevention from carrying out research into the causes of gun violence.

It is these physicians' view that gun violence is a national epidemic, every bit as dangerous to national health as any disease that kills thousands of Americans every year. (Article  HERE)

As long as Congress receives massive donations from the NRA, our sick country will remain in thrall to the NRA and will never get better.

A shooting every day has become the new normal.

Our country is in trouble.

As someone else has said: America made it's choice with Sandy Hook -- guns over children.

Those who support gun violence by whatever excuse (mainly based on fear) are sadly becoming an unruly force that snubs it's nose at the law. Once the hate of one individual towards any other group of people can be expressed by killing, we are living in an anarchy. Remember how we feared Communism? That was an organized force. This is not, but is much more insidious. Just my opinion.

This number seems unbelievable. Epidemic seems the right word for what is happening - infectious, contagious, deadly.

Assault weapons should be outlawed right now. No private citizen should possess them. All rifles and pistol ownership should be possessed by license only. The licensee should be subject to background checks and mental health checks.

Penalty for failure to obey the law, 10 years in prison without parole.

I'm a gun owner (shot gun). Would be happy to get a license to keep it.

The US is a scary country – many people I know overseas who were planning to come as tourists decided to go to Canada or somewhere else for a visit, and I can’t blame them. I just read that guns have killed more Americans so far than in all the wars that they have ever fought. I received a couple of emails from friends abroad asking to explain about guns in the US and why there are so many crimes against abortion providers – they also thought it was illegal in the US – I don’t know how to explain all this, but I may try in my next post. I think there is too much money given to legislators by the Gun Lobby, but I also think that the country is not serious about changing this culture of violence – most think that “thoughts and prayers” are good enough… then they go back to their cell phones or Facebook accounts.

Right on point. Yes, our country is in trouble and I can't see much of a way out in the near future. Think I'll keep the television on, tuned to the Hallmark Channel and watch mindless Christmas movies.

So tragic. I wish people would wake up... The world is trigger-happy, one way and another - guns, bombs.

Vicki, this post is another valuable one from you, that contains facts, and opinions.

Yes, the United States of America does seem to have a lot of shootings this year. Different parts of the country, most shooters dead now and unable to be asked to testify. Some in uniform, some embracing ideologies, some some a bit off any course Older, younger, they all had access to guns and other arms.

I live in a huge city that has had its own shocking 9/11 morning. And yet, I love this city and all that it offers. When i see police officers in the Times Square or other subway stations in my underground travels to and fro, I always thank them for being there. They often seem so young. I wonder if I had any children, much less grandchildren, would I wish them to be police officers.

And then I can flash back to my own young adulthood , 60s-70s, and think of how i wished that my contemporaries were not being drafted for the Vietnam War. And then, I listen to a work colleague tell me about the amazing holiday trip that she and her boyfriend have to Cambodia.

Vicki, sometimes it's just all too much to take in. Right now, I don't think that any current or potential political office holders or candidates offer much wisdom.

Well...that's probably as close to political as I will get for a while. Thank you for the platform. xo

Good summation. I'm reading a lot of books right now on sociology and culture and evolution and history. I'm trying so hard to understand the "other side" -- those who don't want gun control, those who want to respond with even greater violence than that which is perpetrated, those who are terrified of difference and "the other." I'm trying because until we can meet in the middle, what hope is there?

It's more and more too much to take in...
Wisdom seems out of reach.