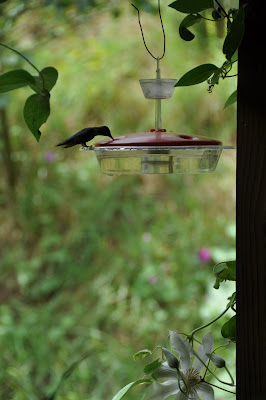 Our summer visitors -- the hummingbirds -- are busier that ever at the feeders, draining them by early afternoon. I suspect that their first hatchlings are now a-wing, thus the increased demand. 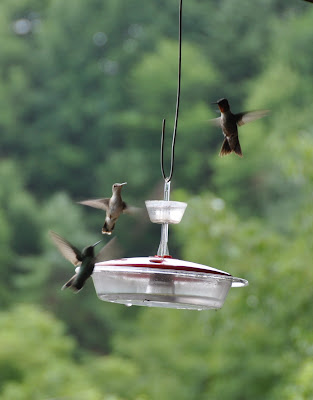 Hummers are noisy,  contentious little critters, especially the males who spend at least three-quarters of their energy running others off. It's hard to watch their buzzing, swooping air battles without being reminded of the tie fighters in Star Wars. Were the creators of these highly maneuverable movie space craft inspired by hummingbirds? Tie fighters even make a similar buzzing noise! 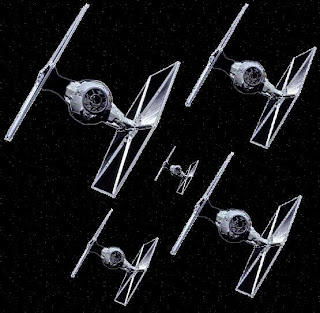 When I took these pictures, there were five or six (hard to be sure) hummingbirds fighting for places at the juice bar but I could never manage to capture more that three at once. 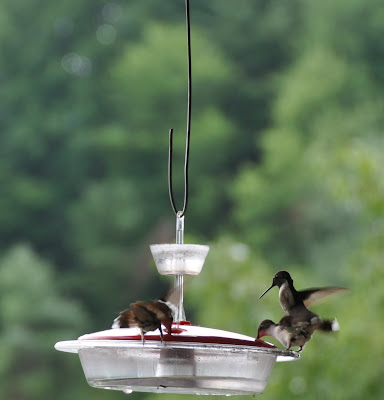 I've cherished another theory about humming birds -- wondering if they could have been the inspiration for the multi-winged seraphim described in the Bible and pictured below in this picture by Jan van Eyck. (Stigmatization of St. Francis.) 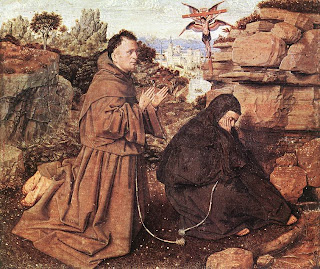 Alas, a quick visit to Mr. Google told me that hummingbirds are only found in the Americas -- though hummingbird-like fossils from 30 million years ago have been found in the Old World.
So much for my lovely theory.
I did find a nice image of a hummer from the Nazca Desert in Peru... 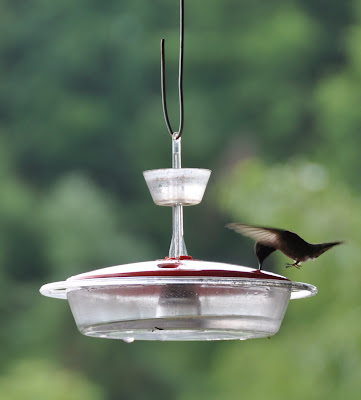 Hummingbirds have such amazing colors. I got to hold one that had been caught in some plastic. It recovered and flew away.

Wow, you have hummingbirds where you live, that´s great! They´re so amazing.

Great hummingbird photos! We have none at all here this year. I haven't even seen any at the garden centers. It's very strange...

What fun information to have. They do look like a bunch of spaceships. I really enjoy seeing them.

No hummingbirds here so, extra special to have your photographs to enjoy. That image from the Nazca Desert is stunning.

Very beautiful creatures, Vicki! Thank you for the extra information!
BTW , my burglar story was partly made up by me. The end was not true.
Sorry...

Good pictures of your hummers!

I have 2 feeders out and there is always activity around them. We really enjoy watching them and their antics.

hummingbirds are really cool...i laughed at the tie fighter reference...smiles. love to watvh them...

Beautiful photographs. I'm always amazed at how much energy they expend defending the feeders.

I am amazed by the stamina of the hummingbird - able to migrate across the Gulf of Mexico from Central America to the US coast without stopping! Although I have heard that they sometimes rest on the oil rigs in the Gulf. Great shots, Vicki.

There really isn't anything much more fascinating than a hummingbird, and you have captured them beautifully in these pictures, Vicki. Terrific post!

When my girls were in 5th grade-they went to school and told their teacher we had a redneck hummingbird that run all the other hummers off :) He got quite a kick out that story. Love your pics!

One of my hummingbird feeders hangs outside my kitchen window. I watch them in fascination as I sit at the table doing other things (like blog). Nice spinoff theory.

You got some wonderful shots, Vickie! one of my favorite things about summer is watching them at the feeder that hangs in the tree by our patio. They are amazing little creatures.

Some fine photographs. I can remember the delight I felt when I saw my first humming bird a few years back. Astonishing creatures.

I love hummingbirds. They were my father's favorite bird. I have an image of one at the top of my blog. We seldom see them here. We had a hummingbird feeder, but they didn't come to it, and the other birds were all over it. I love your pictures. I think I'll get a feeder and see if I can entice any of them here.

My mom used to cultivate the presence of the sweet little things by hanging a feeder near the house's main door. It stayed there until the HB traffic got thick, fast and dangerous! Mom finally took the feeder down when one hapless aerialist managed to get it's beak stuck in the screen door.

Dear Vicki, this little picaflores have been the ispiration to many, many in the history. Here in my garden they show up so many times!!!
hugs,
maria cecilia

Callie, I once saved one from a spider web. It weighed absolutely nothing in my hand -- but it felt so neat to hold it briefly before it buzzed away.


Evalinn -- I was surprised to learn that Europe has none -- nowhere but the Americas.

Victoria -- ours seemed slow getting here this year -- maybe yours are loitering in Mexico, drinking margaritas.

Brian -- I tried to find a good video of tie fighter to embed but failed. They really are similar though!

Mountainwoman -- I'm always telling them if they'd just sit down and share . . . but do they listen?

I have never seen a hummingbird. I should set up a feeder. One of those pretty sugar water contraptions would probably compliment the hunks of fat I hang from the trees for the magpies beautifully!

Your shots are great - those could not have been easy to get indeed.

I've only ever seen these in tropical houses in zoos. They always do look as if they have more than one set of wings.

Tattytiara -- actually, the feeder's at our back door and my camera did all the work! I did take about forty pictures (very quickly) -- many of which were blurred or showed only the feeder.

I LOVE hummingbirds, and am lucky to have them visit me every summer. They have a magical quality, just like dragon flies.
Interesting tidbit,
There was a 300ft hummingbird crop circle found in a barley field in Wiltshire last year. That was unbelievable to say the least.

Your photos are fantastic. I love your feeder as well.

Thanks for sharing this.