Are the Cherokee Still There? 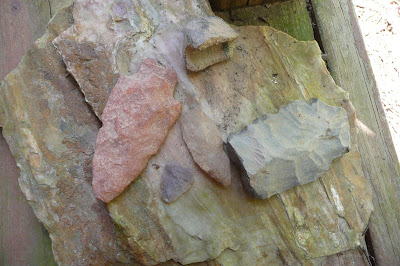 We find their beautiful spear heads and points as well as fragments of stone tools in our fields, just as we find remnants of those who supplanted them. 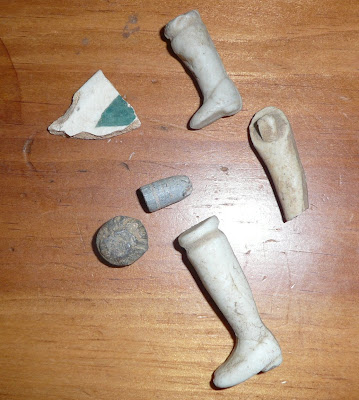 There is no record of permanent Cherokee settlements in our county but we were certainly a part of their hunting ground. The big bottom field at the lower part of our farm is where most of these artifacts came from and the presence in one small area of numerous half-finished points and flakes of flint leads us to believe that this field between two streams must have been a summer encampment and this one area must have been where a flint knapper worked. 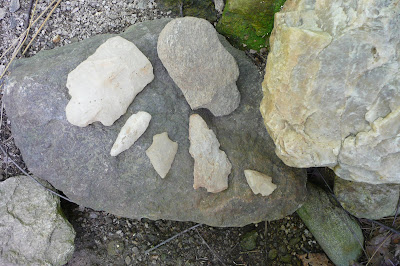 When I mentioned the Cherokees in my Saturday post, Reader Wil (who is in the Netherlands) asked if they were still around and I promised to blog about the Indian Removal, also called The Long Walk or, more poetically still, The Trail of Tears. It's a shameful story, which I've already talked about in my book OLD WOUNDS and which I use again in the forthcoming THE DAY OF SMALL THINGS.

Briefly, the story is this. White settlers wanted Native American land and in 1838 the Indian Removal Act meant that all Native Americans in the southeastern US were driven from their land, houses and orchards destroyed. They were rounded up, impounded in stockades, and forcibly marched west to Oklahoma. 1,200 miles they traveled -- a six month journey. Men, women, and children, the very old and the very young were forced along the Trail of Tears--most walking -- in the bitter winter weather. One in four of the some 17,000 Native Americans died on the march.

There were some Cherokees who avoided the removal by hiding and some who came back later. Eventually, the Cherokees were 'given' land here in the North Carolina mountains -- a tiny fraction of what had been theirs. This is the Qualla Boundary -- Cherokee, NC, a few hours drive from our farm.

The Trail of Tears is our country's shame. I've put a link below to a much fuller account. 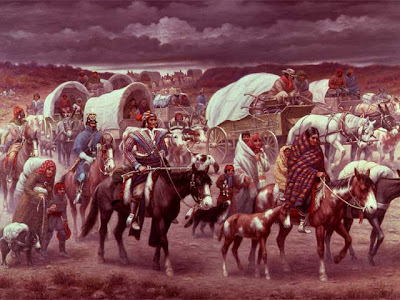 Go here to read about some modern day Cherokees --a Cherokee flute player and a woman who is trying to keep the Cherokee language alive. And here for a visit to the Qualla Boundary -- the home of the Eastern Band of Cherokee. And here for the story of the Trail of Tears.

This is such an iconic event -- it's hard to be a writer in western North Carolina and not feel compelled to write about it. Many have and many will. I'm sure I will again.

Thank you Vicki! This is a most interesting post. It is shameful what we, Europeans have done on other continents. Killing indigenous people and taking their land. I heard a lot about it in Australia from my Aboriginal friends and relatives of my daughter's first husband, who is an Aborigine.

This was a very interesting blog about the Cherokees. I have read of the forced march of these people before. The illustration is moving. I will follow up on the links recommended. It is good to be back visiting you again. I felt quite isolated while I was away.

Yes, the Trail of Tears is so tragic. My gg grandmother was Cherokee, who married a white man and blended in with society.

It really is sad event in our history and even more for their history. They and other tribes really are the only true Americans!
I used to love to visit Cherokee but it seems in the last ten or so years it has become so commercial. I wish it was still as authentic as it was thirty years ago. I still go occaionally though just in hopes it has reverted back.:(

Vicki,
I worked for the Eastern Band of Cherokees for 15 years and emerged from the experience with enough material to write two Cherokee plays and teach a class in Cherokee history, which I have done for the past 30 years. There are lots of distortions and misconceptions out there. My favorite sources are Therman Wilkins' Cherokee Tragedy,John Ehle's Trail of Tears (which is largely taken from Wilkins) and Mooney's Myths of the Cherokees. My favorite myth is the one about the Nunnehi, the Immortal Ones, who once offered the Cherokees admission to their world.
The Cherokees (except for a few) were hesitant, but the Nunnehi told them that the "door was always open." All they had to do was to keep faith with their forefathers, for only them could they "see" the Nunnehi and "hear" their music. Looking at present-day Cherokee, there is some question as to if the Cherokees can still "see" the Nunnehi.

Wil -- I wonder if all races have participated in genocides -- the Cherokee displaced earlier tribes -- who probably had done the same.

Eleanor -- nice to have you back. The links are very worthwhile -- there are many accounts of the Trail of ears but I chose to link to the story on the Eastern Band's website.

Willow -- many, many folks around here have a Cherokee GGmother some where -- but shamefully enough, intermarriage between Whites and Native Americans was illegal in NC as late as 1956.

Carol -- Go to Cherokee and spend your time at the museum, which is wonderful, and the craft shop right across from it, Go riding around the back roads. Visit Mingo Falls which was the inspiration for the waterfall by Granny Thorn's house in OLD WOUNDS. Avoid the casino and Santaland and the junky gift shops.

There are a couple of festival they have-- really for Native Americans but anyone is welcome. I'm try to plan to go to the one in October which I've been told is the best.

Gary -- I know that alcohol and drug abuse have taken their toll but I think that there are certainly good examples of Cherokee who haven't lost their way-- Myrtle Driver springs to mind.

I have very little experience in Cherokee, however, so I bow to your fifteen years.

Vicki - thank you! I loved this post. It is indeed, shameful, but important that we remember, I think. And you wrote this beautifully.

Vicki- Have you read "One Thousand White Women" by Jim Fergus? It's a fictional account of Cheyenne chief Little Wolf's real life request to integrate their tribe into white society - Cheyenne are matrilineal and believed the best way to integrate themselves was to have children with white women. He met with Pres. Grant and made the request for 1,000 white women, he was basically run out of town! This book is told through the journals of May Dodd - one of the women sent to marry the Cheyenne - if the government HAD agreed to Little Wolf's request. Great insight into the Native American culture.

Thanks, Kaye -- there are so many terrible stories -- I just came across an account from the early Sixties in which teachers at the school in Cherokee -- Cherokee! -- were instructed to gather up all their materials relating to the old culture -- stories, artifacts etc -- for a mass burning. Hereafter, the principal decreed, instead of spending time teaching Cherokee culture they would concentrate on useful information.

An interesting post and a sad story ...Alas, every country has its own shameful event ...Wars and so on ...

Colonialism has much to answer for -- speaking as one living in a former colony on land stolen from the Cherokees long ago.

I am in awe of all those treasures you found in your fields!

I cherish the memories of my visit to the Cherokee reservation in North Carolina! We walked through the Oconaluftee Indian Village in the woods on a golden autumn day. I felt transported back in time. The most enchanting scene was the Indian garden at a clearing in the woods, a breath-taking site! Just thinking of the moment when I spied the garden through the trees takes my breath away. I never again looked at Echinacea and squash plants the same way after that visit.

The Oconoluftee village is so well done -- as is the museum.

Scenes like that garden are particularly heartbreaking when one knows that US soldiers, enacting the Removal orders, burned the Cherokee houses, cut down their orchards, and tore up their gardens in an effort to make sure the Cherokee wouldn't try to return.

These 'savages' were probably the most civilized of the Native American tribes, with their own newspaper, their own written language. They had adopted the white man's ways but it didn't save them from the Trail of Tears.

Wow, I just happened upon your blog during a random search but I had to check out the entry when I saw the title. I am Cherokee myself; my caucasian family is actually from the North Carolina area, but I'm not sure about the Cherokee side. Because of the Removal and the Dawes Rolls and such, our family histories got very very convoluted. But trust me - the Cherokee (Tsa-La-Gi) are still around and kicking! :) My nation has lots of information if you'd like to check it out at www.cherokee.org. :)

Welcome, Traci -- Oh, yes, the Tsa-la-gi are here in NC. Some never left; many came back. I've enjoyed several visits to the Qualla Boundary and the Museum of the Cherokee, as well as the excellent web site you mention.

Wow, how fascinating to find those gifts from the past in your garden. That would make me want to hoe up the entire property. There is something about finding artifacts from previous generations that just fascinates me. I remember hiking on a trail out west and there were shards of ancient pottery all along it. Something about that just captures my imagination and runs away with it. Alas, all I've ever found in my garden are screws and nails from somebody's home improvement project. Oh well, in 500 or so years, maybe those too will be quaint and interesting.