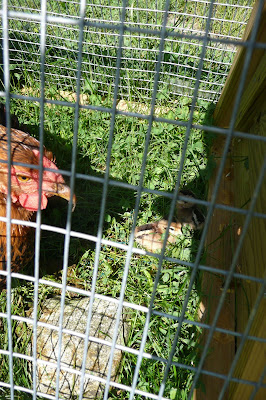 The broody hen's patience has been rewarded and she is the proud mother of two, possibly three tiny bantam chicks. She was very defensive, not liking the looks of the lady with the camera aimed at her babies, and she hustled them under her feathery skirts right away but I'll try again for better pictures.

The rock work planned for Friday had to be canceled due to rain but Saturday was a perfect day. Over half of the walkway remained to be re-done and the fellas got started early: pulling up the modest-sized stepping stones I'd set long ago (and that had since tilted and sunk, becoming pretty much useless as a path), digging a footing, spreading it with gravel, and laying some BIG stones purchased from the rock yard. 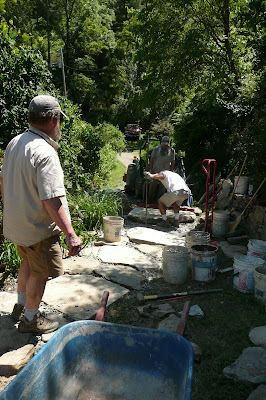 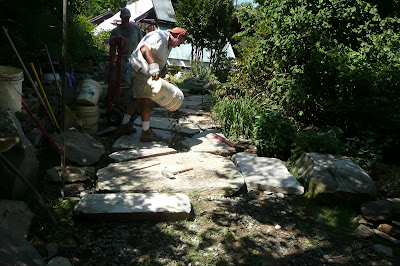 and the guys are quite good at nudging these monsters into just the right place in their gravel beds. 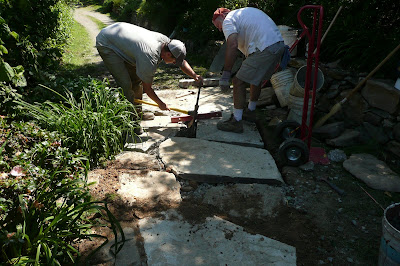 By five, the last rock had been laid, the gravel had been tamped down and covered with dirt, and the walkway had been swept and hosed down. 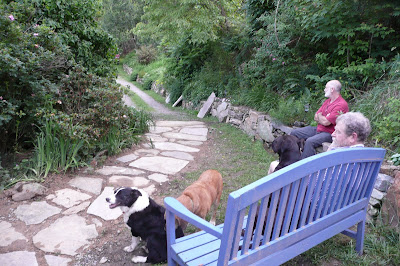 After showers, it was time for the traditional 'gloat drink' as workers and watchers alike sit and enjoy the beautiful new path.
And then the feast -- putting to use most of that wonderful box of veggies that arrived Wednesday from Carol. 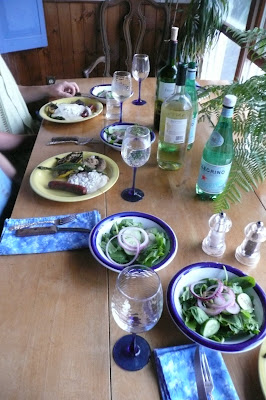 While John grilled the yellow crookneck and zucchini squash, along with some of our own asparagus and skewers of shrimp and some andouille sausage, I made cheese grits and fried green tomatoes, as well as a green salad with the last of those sweet sweet cucumbers

There was goat cheese (for those who like it) to stir into
the grits -- and for afters, there was Ba's pound cake, sliced fresh peaches, and fresh sweet cherries. 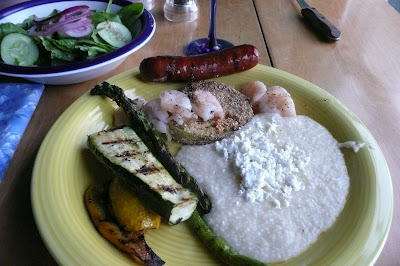 A well-earned reward for a good day's work! Hearty thanks to those rock-layin' guys -- and to Carol for much of the feast!

Dear little chicks ! What a lovely surprise. Your hen has been doing a fine job. I've never had Grits. It looks like a sort of porridge?
Blessings, Star

So, the grits already had some cheese in them, but people could also add goat cheese? What richness! We don't really know from grits up here, but I did have some one time in Georgia.
Verification word: floptini.
Recipe: Yoo-Hoo and gin. (Remember Yoo-Hoo?)

Ah, grits! I thought this might be a puzzle to some of my readers. They're (the word grits is always plural)pretty much a Southern thing.

Also called hominy grits, they are made from corn (maize) kernels that have been dried, treated with lye to remove the outer hulls, then ground fine. You add them to boiling salted water and cook, like porridge, till thickened.

In my family, they were a breakfast dish, served with butter and sausage and eggs on the side. They were also a traditional accompaniment for fried fish.

Shrimp and grits is now a popular dish in many Southern restaurants. The grits are fancied up with heavy cream and various cheeses.

Auntie K -- yes, the grits were enriched with a combo of shredded cheddar and Monterey Jack.

A lot of folks make the mistake (at least, I think it's a mistake) of treating grits like oatmeal and putting cream and brown sugar on them. It doesn't work for me -- though in some circles in the South, cane syrup is considered appropriate.

And then there's red eye gravy (made after frying up some country ham -- it involves coffee) that for some is the sine qua non topper for grits.

What cute little chicks and what a good mama!

Your sidewalk is beautiful and what a feast afterwards ... the loaded down plates look down right delicious!

Auntie K -- I do, indeed, remember Yoo-Hoo -- I never really liked it --kind of a thin chocolate milk, it seemed to me.

Rock work is under way at WM, too! We have similar limestone walks that were in sad need of repair. They, too, had sunk over the years.

Beautiful work on the pathway. That should pretty much last about forever! Love it. The baby chicks look like little quail--and momma's beak looks fierce. We had a discussion about grits at work one day (some of our people are from the south). In the past taters pretty much were food of choice around here (for side dishes) and of course the obiligatory pot of brown beans. We also discussed rice, and that we rarely ate rice as kids, unless it was sticky white rice with lots of sugar--and that was very seldom! It's funny how food choices change from locale to locale.
Tammy

To add to the grits lore -- it's a dish the southeastern Native Americans (Creeks, Cherokee, Seminoles, etc.) made, only they called it SOFKEE. Probably southern settlers learned it from them.

Willow -- do folks eat grits where you live? And why do I think you live in Ohio? Over lunch my husband and I were wondering if grits were even available beyond the South. We decided that areas where lots of Southerners migrated to -- such as Detroit -- probably did.

We fix those for certain meals -- say with hamburgers -- but they're not a staple starch like potatoes or rice or pasta.

I do know about grits, but only learned about them once we settled here 30+ years ago. The folks in central OH, where we just returned from visiting family, are not familiar with grits.

You can get grits in New Jersey - soul food restaurants or well-stocked grocery stores. However, no stone ground grits. For that, I have to stock up when I'm down south. They are quite a bit like polenta which is commonly found here from the large Italian influence. I've introduced a number of people to garlic cheese grits here as it is one of my favorite side dishes and they kind of poke nervously at it until they steel themselves to try it. Then they ask for seconds!

Beautiful walk, Vicki! I think we'll have to do the same to ours in the fall.

Grits are indeed similar to polenta - a slight difference of taste with the hominy grits.

And yes, stone-ground is best, IMO.
And garlic cheese grits are Wonderful! I like to add roasted chiles. Add enough eggs and bake it and it's like a down home souffle.

Chicks! And the grits look yummy.

And the chicks are adorable, BB!

Vicki,
Brown beans..as in pinto beans. Usually just plain, but sometimes seasoned with ham. My Grandma Dugan always had a pot of beans on the back of the stove and no matter the time of day, she'd want you to sit and eat a bite. We ate them as side dish, or with crackers, cornbread or plain sliced white bread for the main meal. I'm guessing it's just one of those foods that was cheaper to buy and stretched a long way.
Tammy

Ah, pinto beans -- yep, they're a staple in these parts but weren't all that popular where I grew up -- these days my family is more likely to have garbanzo beans or black beans as our staple beans.