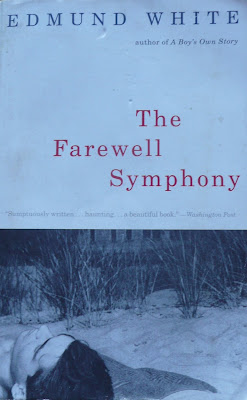 Our local library has an ongoing book sale that I can't resist -- 50 cents per paperback, $1 per hardcover. Some of the books are donated; some have been purged because no one's checking them out.

It's all of those things -- and more. A very intimate look at a segment of pre-AIDS gay society which I found fascinating -- as an anthropologist might find fascinating the interactions of some previously unknown tribe. I also found it beautifully written and profoundly unsettling. 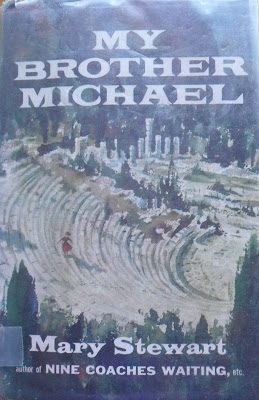 So it was something of a relief to turn to Mary Stewart's My Brother Michael. I was a great fan of Stewart's romantic suspense back in the Sixties (this book was published in 1959) and I decided it would be interesting to see how it had held up.

At first I thought I wasn't going to enjoy it -- a slightly silly female protagonist becomes involved with a handsome mysterious man -- look at the cover, I thought, there she is in her dress and high heels, fleeing some unknown danger. Plus everybody was always smoking -- which no longer seems sophisticated and adult to me. (On the contrary . . .)

But then I remembered why I loved Stewart's books -- it's the settings and the descriptions. This one is set in Greece -- in and around Delphos.

"Bigger and bigger grew the circling hills, barer the land, drawn in with great sweeps of colour that ran from red to ochre, from ochre to burnt-tawny, with, above all, the burning, the limitless, the lovely light. And beyond all, at length, a grey ghost of a mountain massif; not purple, not faintly blue with distance like the mountains of a softer country, but spectre-white, magnificent, a lion silvered. Parnassus, home of the ghosts of the old gods."

Stewart spins a good yarn, as they say. But it's the descriptions, in the end, that make her stories places I want to revisit.

I love Mary Stewart! Because of my mother, of course (she has most of her novels) but also because of two reasons you named for those two books. First, the descriptions of the areas. My desire to visit Greece came directly from reading "The Moon-Spinners." Second, because sometimes it feels like anthropology. Reading stories about these chain-smoking, helpless/sassy heroines is fascinating. And the food these people eat!

Have you read Stewart's "Merlin" trilogy? Those books are huge favorites.

So glad that someone of the younger generation is enjoying Stewart! Re Merlin trilogy -- see my side bar, up there under WHAT I'M READING. I LOVE these books-- truly magical -- and they don't seem dated in the way the romantic suspense does.

I'm foreseeing a little Arthurian jag for my reading -- the Stewart books THE ONCE AND FUTURE KING, MISTS OF AVALON, THAT HIDEOUS STRENGTH . . . oh yes.

Some of my favorite books I've picked up at our library's sale shelf. You certainly can't beat the prices, huh?

I love Mary Stewart also. And I agree - for her descriptions. I also hold her to blame for my lifelong desire to visit Greece. I finally was able to do that, but one trip was not enough. That desire to go to Greece is still with me.

I have not, however, read her Merlin trilogy. I have read Marion Zimmer Bradley's THE MISTS OF AVALON and it will always be, to me, the definitive in all thing Arthur.

You guys! You've just added more books to my TBR (AND to be RE-read) pile!! I'll be joining you in the Arthurian jag, Vicki.

Willow -- and the best thing is, if I find they're not keepers, I just donate them right back to the book sale.

Kaye -- You must try the Merlin trilogy! Excellent!

I too love those sale shelves at the local library. There are always books there I would never have found otherwise, and that end up being great treasures.

I'm amazed how quickly hard cover best sellers wind up there. I guess they have to have lots of copes at first and then the demand dwindles.

I remember discovering Mary Stewart just as I graduated from the children's to the adult section of library. Born in '57, so it had to be sometime in the Sixties. So new books then, and I was enthralled. Of course I also remember thinking that if I started with the "A's" (in fiction, of course), that I might actually be able to read them all. Ah, youth.

And so sorry about your dog. Pets are such a part of us.

Marta -- I had similar ambitions -- it was a smallish branch library and it seemed doable -- except that I would bog down in re-reading old favorites.

I'm going to have to reread some more -- I just finished THE HOLLOW HILLS -- the Merlin books really are timeless in a way the romantic suspense isn't.