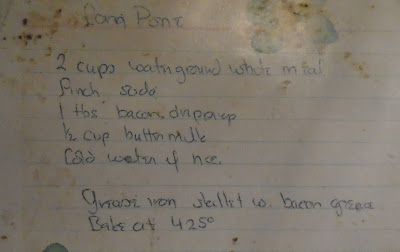 My  grandmother Ba's corn pone--crunchy outside, gooey inside, a perfect vehicle for butter when hot--is something I've never had anywhere else and have not been able to duplicate.
But I decided to give it another try and began by ordering water ground  white cornmeal, such as Ba probably used. 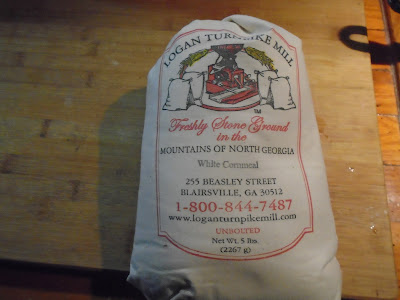 I know she used to have her sister in Troy, Alabama send her cornmeal and sausage since Ba couldn't find the sort she wanted in Tampa. 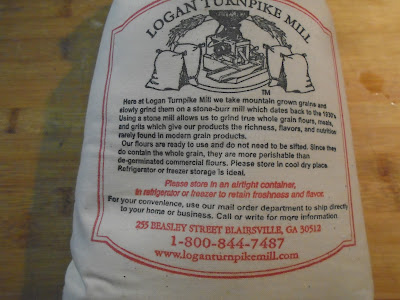 I already had the little flat skillet and I had buttermilk. The recipe, which I wrote out over fifty years ago, is vague in important places. 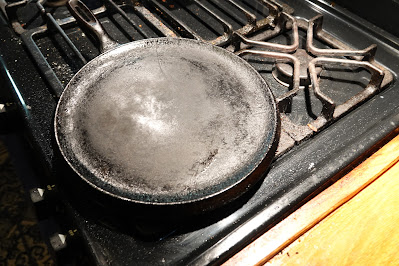 A half cup of buttermilk isn't nearly enough to make a batter with two cups cornmeal. So how much water? I had to rely on a very vague memory of what the batter should look like--fairly stiff and spooned into the skillet rather than poured.  It was probably about a cup of water. Then the question, how long do you cook it? You want top and bottom browned and crunchy but how about that gooey middle? 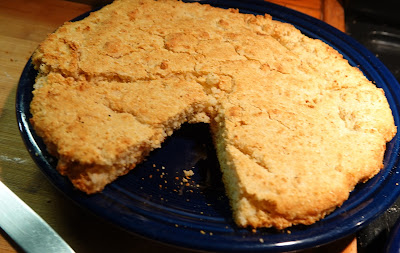 Alas, the middle was not gooey. But the top and bottom were crunchy and the taste -- the taste was the Platonic ideal. Not since the cornbread our neighbors used to make with their own corn, freshly ground each month by Henry Treadaway who had a grinder attached to the PTO on his tractor, not since then have I tasted such honest corn flavor.
As for the gooey middle--well, I'll just have to keep trying, won't I? 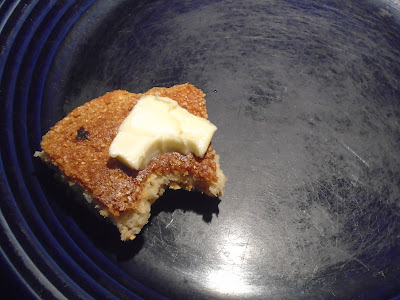 Fascinating! I'd be tempted to keep trying too. My grandmother was a "little of this, some of that" cook, so her recipes are hard to duplicate. But fun to try. Ellis

How wonderful for you to still have the recipe. I've had a cornbread that had more buttermilk, and was gooey in the middle. But of course I didn't have that good cornmeal. I wonder where my recipe is...