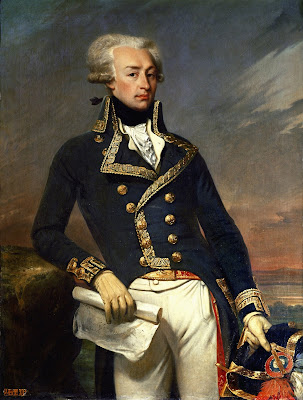 Growing up in Tampa, I was aware of Lafayette Street and the Lafayette Street Bridge and eventually in one social studies class or another learned that Lafayette was a French aristocrat who fought with George Washington in the Revolutionary War.

Later I read a stirring account in Louisa May Alcott's An Old Fashioned Girl of a grandmother's memory of Lafayette's 1824-25  triumphal tour of the United States (at the government's invitation)  -- the hubbub and excitement in the streets, his kissing the hand of the governor's widow, only to discover his own face stamped on her glove, young women pelting him with flowers . . .

"And here the old lady stopped, out of breath with her cap askew, her spectacles on the end of her nose, and her knitting much the worse for being waved enthusiastically in the air while she hung over the arm of her hair, shrilly cheering an imaginary Lafayette."

It was this return tour when, as the last surviving general of the Revolution, he visited every state, that probably accounts for many of the streets and parks, towns, cities, parishes, and counties named Lafayette.

Not to mention babies.  I married into a family that preserves the Marquis's name still -- John's great grandfather, uncle, and first cousin all three bear the middle name of Lafayette. 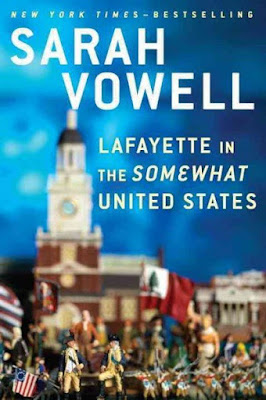 But it wasn't till I read Sarah Vowell's typically idiosyncratic take on the Marquis that I really began to appreciate who he was and what his part in the Revolution had meant to our country.

He was nineteen (!), a wealthy orphan of an aristocratic family and a French army officer when he was enraptured by the noble ideals of the American Revolution (as well as the opportunity for glory) and, defying the orders of his monarch, purchased a ship and set out for America where he offered his services to the impoverished nascent republic. And despite his youth, those services were invaluable.

For me, Vowell's roundabout, quirky approach to history does more to bring Lafayette to life and to make him relevant to today's reader than any traditional history book.

I confess to being addicted to her rather squeaky voice and dead-pan delivery--I have all her books on audio and will happily listen (and re-listen) to anything she has to say about Lafayette--or the colonization and exploitation of Hawaii -- or the Puritans in New England -- or the various presidential assassins -- or patriotism in general.

And speaking of patriotism, here's a shout out to Mitt Romney -- the lone Republican senator who took his oath seriously-- to do impartial justice in the impeachment trial.

Informative review from the NY Times HERE
Posted by Vicki Lane at 2:00 AM

Not many men f 19, no matter what their circumstances, would help a new nation rebel against it's founding nation. Yes, Lafayette was quite someone. Incidentally, there were a lot of George Washington's in my family!

I love Sarah Vowell's writing style. I'll have to read this one because it's a bit difficult to imagine her style fitting in a historical context.

I'm glad he didn't Mitt win back then, but on for him now, and what an improvement he would be. But that isn't saying much.

Sarah Vowell is such a terrific writer, and her takes on her adopted home of Montana and her Oklahoma origins are pure Americana, all in that inimitable, droll Sarah intonation! Like many, I first heard her on This American Life, but now get to read her editorials in the NYTimes.