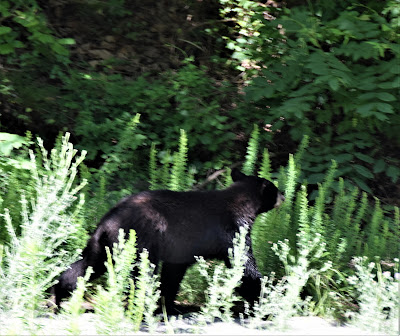 . . . is my explanation for why I almost always have my camera with me . . . in this case, on the front seat of the car.

It wasn't an elephant this time, but an almost full grown bear, crossing the river road on the upstream side of Marshall.

Although I know they're around our place -- Justin spotted one a few weeks ago below our barn -- I never see them. So this was exciting.

There's something so appealing about bears -- being brought up with teddy bears may account for it. But why did teddy bears become so popular?

I can fully understand why many primitive peoples venerated these magnificent critters. 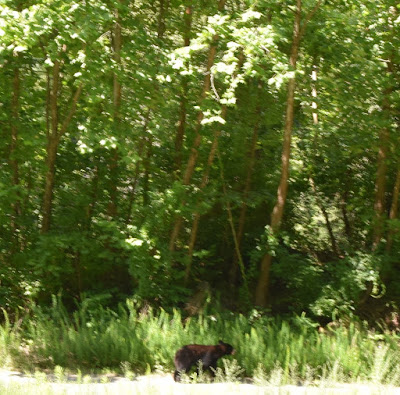 Yes, exciting to see such enormous beings. My wildlife sightings these days are limited to squirrels and birds. I think that Mr. Robin looks at me and wonders if I've got any worms to offer.

How neat is that?! I've only seen one in the wilds once, and I can't remember about zoos as it has been quite a while.

Oh, I am so glad your first reaction was not to shoot the creature. We have this image of Americans never leaving home without a gun. I have to admit though, that I never included you in the category.

Teddy bears were born within a short span in two countries, in the US, named Teddy in honour of President Roosevelt and in Germany where a young woman from the Steiff family made one after her brother, Richard Steiff asked her to; she made it look friendly and cuddly and when they manufactured them, the soft toy took off instantly and became a world wide success. The name ‘Teddy’ was adopted in both countries.

So neat to see a bear in a friendly place... There is so much controversy here over the presence of bears in France.