After binge-reading Educated (see yesterday's post), I binge- watched Good Omens. Five or six enthralling hours that took me from from the Garden of Eden to what might have been Armageddon but, thanks to an angel and a demon and a witch and a computer-illiterate dork and the Anti-Christ himself, wasn't.

I've read/listened to the book multiple times and was pleased at how much of the original dialogue and narrative was preserved in the series. There were some omissions--understandable--and some additions--delightful. After all, the series had Gaiman himself doing the writing.

And the casting! Every character was perfect. But if any one was more perfect than the others, it would be David Tennant as Crowley, the demon with the catwalk swagger.

The whole thing exceeded every expectation. I rarely like adaptations of books I've loved, but this was just right.

I don't know how it would seem to someone who wasn't already familiar with the story. John isn't, and he isn't a fantasy fan either. But he started watching with me then dozed off and was hopelessly lost in the (admittedly intricate) story when he awoke.

I'll watch it again.  And again. 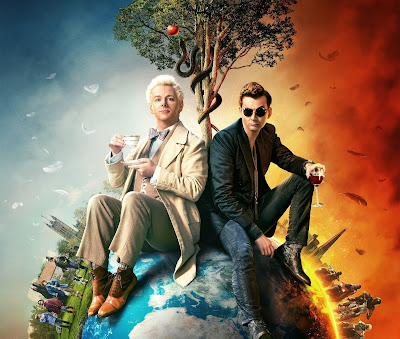 I've got this one on my list to watch, despite my not being a fantasy fan at heart. Would you recommend my reading the book first, in order to get the most from the miniseries? Your review has sealed the deal. What do you think?

I've been waiting for our daughter who is flying in today. Both of us are great fans of Neil Gaiman. He put so much of his work into this series that I was certain it would be true to the book. Our granddaughter is already a Gaiman fan and every night she gets down the Chu books and "Blueberry Girl." So she has become sleep-trained by those books, the Chu books in certain order and then Blueberry and then bed.

Never heard of it. I had to give up on fantasy although I liked some earlier works quite well, such as Stephen Donaldson's, Thomas Covenant series -- the first two, not the 3rd series.

Nan, I would definitely read the book first -- or listen to it. There's an excellent audio of it.

Oh that is good news. At least this fantasy world is satisfying. One of my favorite escapes from the disappointments of the real world.