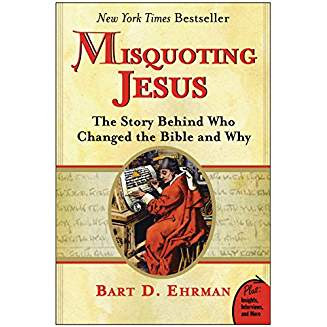 Now and then I take a break from my rigorous schedule of reading fiction and force myself into something a little weightier. While I was immersed in devouring (re-reading) all of Tony Hillerman's Navajo mysteries, as well as the continuations by his daughter Ann, I picked up this semi-scholarly book on understanding how and why the Bible has changed over the centuries.

I'm not a Christian nor, indeed, am I a Believer in any usual sense of the word. But I find the study of religion fascinating and important, inasmuch as religion affects so much of our lives. That's fine, if it's your own religion and you choose to follow its mandates. But all too often it's someone else's religion (or interpretation thereof) impacting others.

Whether it's taking off shoes at an airport because a Muslim fanatic had a shoe bomb or living in a dry county because local Baptists believe no one should drink alcohol, or being denied coverage for birth control because your boss is Roman Catholic, or being turned away from a bakery because the owner won't make a wedding cake for a gay marriage, religion affects everyone.

And, at this point in the history of our country, the religious right, especially those who believe the Bible is the inerrant Word of God, are wielding their uninformed power to the detriment of society. Their beliefs allow them to ignore climate change and environmental pollution because those same beliefs tell them that this world doesn't matter -- they'll be going to heaven soon.  These beliefs are finding their way into textbooks, side by side with actual science. These same beliefs fuel their support of Israel to hasten the onset of Armageddon. (See a fuller explanation HERE.) And this unqualified support, along with the plight of the Palestinians, goes a long way to explain the rise of Al Qaeda. (A history of colonial exploitation is pretty important too.)

So, what if this belief in the Bible as the Word of God, this belief that informs so much of our everyday life, as well as events on the world stage, is actually a belief in a series of cobbled-together texts, none of which are original but a series of copies, fraught with inaccuracies, whether inadvertent or intentional?

Bart D. Ehrman, author of this interesting book,  was a fundamentalist Christian when he attended Moody Bible Institute to study scripture full time. At Moody, professors and students all signed statements of belief in the Bible as the inerrant word of God. Ehrman signed without hesitation.

As he pursued his studies at Moody and later at Wheaton and then Princeton, learning Greek, and Hebrew in order to read the earliest documents (ca.2nd century) from which the present Bible is composed, Ehrman was dogged by the question: How can we say scripture is the inerrant word of God if all we have are copies, the earliest mostly by amateur copyists and full of errors and inconsistencies?

Erhman gives a fascinating account of techniques developed over the years to attempt to determine which readings are more likely to be accurate when two source texts disagree. He notes that by the 18th century, scholars had found around 30,000 variations in the texts of the manuscripts on which the current New Testament was based.

(This was a more serious problem for Protestants, with their emphasis on each individual's reading and interpreting the Bible for himself. Roman Catholics, on the other hand, could simply leave it to their priests to interpret scripture for them. And the priests had the Pope to provide the true meaning. Papal infallibility is a wonderful thing. Kinda like Presidential* infallibility. But I digress)

Ehrman deals with the causes of the various mistakes, omissions, or additions in the early manuscripts, and moves on to consider emendations made purposely, either to make to text more understandable or, rather insidiously, to bring to text into conformity with current theological opinion.

I found this last part the most annoying and the most interesting.  First of all,there seems to be a good chance that in the earliest version of the scriptures, women played an important role in the church. In one of many examples, Ehrman points out that in First Corinthians, Chapter 11, Paul instructs women to cover their heads when they pray or prophesy in church, but three chapters later, he forbids women from speaking at all in church.

Even small changes, such as switching the order of names when the woman's name was first, were part of this ruthless campaign of the early (but not the earliest) church to put women in their place and render them silent and subservient.

Another controversy that seems to have shaped scripture is the Christian attitude toward Jews. The fact that many Jews would not accept Jesus as the Messiah, led the Christians of the time to attempt t0 prove them wrong by demonizing them and even ascribing the Crucifixion to the Jews rather than to the Romans. Whereas in an early text, Pilate sends Jesus to be crucified (presumably by his on Roman soldiers,) a later edit has Pilate turning Jesus over to 'them' (the Jews.)

The third source of many changes was in answer to scholarly Pagan criticism. (Pagans being neither Christian nor Jew but followers of the many mostly polytheistic religions that flourished in the Roman Empire .)

In the middle of the 2nd century, pagan intellectuals wrote tracts against the new religion, attacking both Jesus (a common criminal, a working-class rabble rouser) and the practices of the religion (greeting one another as 'Brother' and 'Sister,' exchanging ritual kisses, eating and drinking the body  and blood of their god -- all of which suggested to the critics, incest, debauchery, human sacrifice, and cannibalism.)

These pagan scholars also ridiculed the scriptures as being wildly inconsistent -- accounts of Jesus's birth, life, and death varying from gospel to gospel. This was the cue for the apologist scribes to curtail these arguments by changing scripture. (Even so, they didn't catch all the inconsistencies, not by a long shot.)

With all this in mind, and after years of diligent study,  Ehrman has come to see the Bible as very much the work of men, a document that has subtly changed over the centuries, reflecting the attitudes of the times.

"In a more basic sense," he says, "they changed scripture the way we all change scripture, every time we read it. For they, like we, were trying to understand what the authors wrote while also trying to see how the words of the authors' might have significance for them, and how they might help them make sense of their own situations and their own lives."

This I've got to read! It reminds me of a good friend, also a former Catholic priest, who has many of the same conclusions.

It has been quite awhile since I read this book, and i have read Ehrman ever since. He has a new book out which is on my list.

I like how he informs the rest of us what serous scholars have know for quite a long time.

Indeed. I've been aware of many of these findings since John was in graduate school for Comparative Religion and I read his textbooks and typed his papers. Amazing stuff that seems not to have permeated most of society.

I think society for the most part simply does not want to hear this truth. Even Billy Graham was criticized for not using the King James version of the Bible since it is, after all, the only true word of God.

Food for thought my friend. I am in a crisis of church, not Faith. I too like to find my own way. I believe whether it’s The Pope, Billy Graham or another scholar.....they all lead us in the direction of their own beliefs. It’s a mystery for sure. I do enjoy readings of others, some challenge me, some make me uncomfortable some I truly enjoy. xx