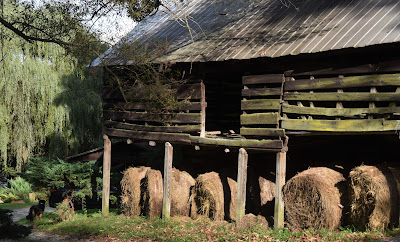 The cows have to eat year round so hay in the barn is a good feeling. So are a full freezer and a good woodpile. 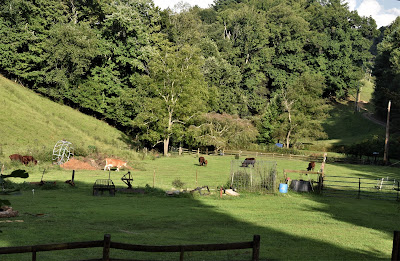 I've been so busy cleaning up the garden and now helping John get the Gran House ready for our new tenant that I haven't managed much in the way of blog posts. By the end of the day, I just want to stretch out and read or watch another installment of some British mystery.

We just finished up the Inspector Lynley series. I'd read almost all of them and it took a while to adjust to the television characters. I found Lynley rather annoying and John really hated Helen -- the first one. When a new actress came in mid series, he liked her better. (I didn't. Too perky.)

We probably wouldn't have finished the series if it hadn't been for Havers. We both liked her  a lot-- she was a nice antidote to Helen and Lynley's vaporings and angst. Lynley was such a disappointing series after the books. Didn’t both helens have to be killed? We may still rewatch it in BritBox, but maybe not. It’s low on the list.

I finally watched the last season of MIDSOMER MURDERS. That's another one that relaxes me and it survived well with several changes in the main actors. Inspector Lynley soon frustrated me and I gave up. But I've loved almost all of the other British mysteries, especially Vera.

I love the end-of-season photographs of the farm.

We tried to watch Vera an couldn't get the subtitles. And without them, I'm lost.

I maybe over 70 but nathanial Parker’s good looks are not lost on me. It made Lynley tolerable. But you are right Havers is the character that saves the series. Vera is available on Acorn ($49.00/year) with subtitles. I am in the middle of rewatching the whole series, but with complicated licensing agreements, I had to watch part of the series on Britbox (subscribed thru Amazon Primebecause I could not get the subtitles to work on the Britbox app) and part on Acorn. As you can see, when you have an addiction to British tv you’ll figure it out. The northeast British dialect and accent is hard to understand. Another series that I have rewatched is George Gently(another with NE accents). If you haven’t discovered it, try to find, Martin Shaw and Lee Ingelby are great. I also like the new version of Father Brown.

Patricia -- We subscribed to Acorn and started watching Vera last night. I love the character! So unexpected. Will keep Gently in mind for the future.