When I Rode a Horse Everywhere 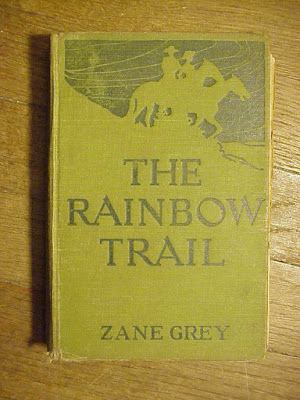 When I was young, I was deeply enamored with the Wild West. This was the early Fifties and there were Western radio programs  -- the Lone Ranger was my favorite -- and Western movies and eventually (we didn't have a television till later,) a plethora of western TV series. What's more, the magazine Arizona Highways, showed up regularly at my grandparents house, full of gorgeous pictures of deserts, Indians, canyons and cacti.

And when I went with my parents or grandparents for the usual Sunday afternoon drive, in my mind I was riding a horse. The fact that there was a kind of swag to hold on to across the back of the bench front seat gave me reins to hold as I guided my imaginary steed through sagebrush and hidden canyons

I can't name the the inciting incident -- but a serious contributor to my infatuation was a particular shelf of books in the Tampa downtown library -- the Westerns, especially those by Zane Grey.

My parents made the trip to the library once every few weeks and I trailed along. Oddly, I have no memory of a children's section -- just the Zane Grey books.  The Rainbow Trail especially has lingered in my memory for over sixty years now -- hazy, indefinite . . . something about Mormons and a ,mysterious frisson at the puzzling village of 'sealed wives' --  the unlawful extra wives kept hidden away -- and the equally puzzling 'night visits' paid by their husbands. 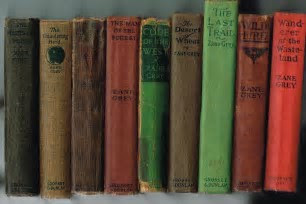 Since I seem to be in a re-reading sort of a mood, I found a paperback copy of The Rainbow Trail and jumped in, only to realize that it was a sequel to the famous Riders of the Purple Sage -- which I didn't remember reading -- it was only sixty-some years ago . . .

But on reading Riders, I realized I must have read it back then -- there are bits and pieces of it that seem very familiar and, I swear, have made their way into my subconscious and, in a few cases, into my writing.

The description is sublime -- maybe too much for modern tastes but not for me. The tone -- high, self-sacrificing morality and nobility against utter villainy -- is certainly not to modern tastes -- even I was a tad appalled when the hero flees rather than shoot a man who he believes has come to do the heroine harm.

But Grey was writing in the early 1900's and this is pretty standard. I have a high tolerance for melodrama, having devoured my grandmother's books from that era.

The hidden valley described in Riders has evidently lurked in the back of my mind all these years. The description seemed utterly familiar when I read it.

" Above Venters loomed a wonderful arch of stone bridging the canyon rims, and through the enormous round portal gleamed and glistened a beautiful valley shining under sunset gold reflected by surrounding cliffs. . . The valley was a cove a mile long, half that wide, and its enclosing walls were smooth and stained, and curved inward, forming great caves. . . . No purple sage colored this valley floor. Instead there were the whites of aspens, streaks of branch and slender trunk glistening from the green of leaves, and the darker green of oaks, and through the middle of this forest, from wall to wall, ran a line of brilliant green which marked the course of cottonwoods and willows."

Trained as a dentist, Zane Grey wrote in his spare time until his books became best sellers and his life became a bit like his books. I found the article in Wikipedia HERE fascinating. (He was not quite as 'moral' as his heroes.) 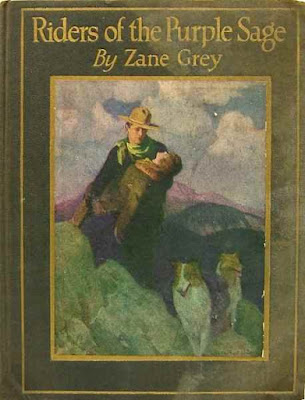 I rember reading Zane Grey as a young girl, loved him!

Oh those little cords on the back of a front seat...I'd completely forgotten them! Thanks for the memory jog! I didn't read Zane Grey till much later in life, for some reason. But I loved those cowboy shows, radio and then TV!

I also loved the Zane Grey books. I was amazed at the use of the adjectives and thought the descriptions were wonderful. Haven't read one since I was ten or eleven so perhaps I should try to see what I think of them now.

I had only heard the name but never read any of Zane Grey's books. Thks for the link.

What is it about Westerns that made them so captivating in that era? At our house it was the Lone Ranger, Gunsmoke and Bonanza, and later the spoofs like F-Troop and the Wild Wild West. The Wiki article mentioned Zane Grey was Eisenhower's favorite author. He was one Laura Ingalls Wilder's favorites too, and I think that the Little House series shows some influence from him.

If you're in the mood for Westerns, might I suggest News of the World by Paulette Jiles?

I found three Nancy Drew books on the lawn up the street and have read them to Sue at bedtime. Now my daughter has given us a pile of books — Hardy Boys, Chip Hilton, Kate Tracy and maybe others. I wonder if any of the books will be ones that I read and if anything will seem familiar?

For me it was Jack Londons books of the north. Later Louis L'Mours books and some of his movies. His last book LAST OF THE BREED was my favorite.

I love to read your reviews of these older classics. I have read several of Louis Lamour's books, but none of Zane Grey. I'll be adding these two titles to my list!

This is so fun to have you reminding me of old favorites! :)

Love these covers -- and tickled picturing you employing already that huge imagination! I, too, was a Jack London fan -- and my mother used to threaten to take them away because I always cried so much. Poor White Fang. And I thought about them all the time when in the snow in Alaska - mostly being glad I didn't have "to light a fire." Thanks Vicki!