Thinking in Black and White 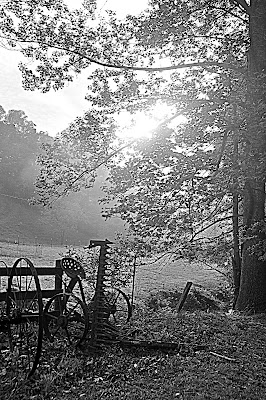 A while back, one of my friends made the comment that they don't seem to teach patriotism in schools any more.  As this friend and I are on pretty much opposite ends of the political spectrum, this seemed to me a topic fraught with danger and I made some non-committal reply and the conversation went elsewhere. But the question has remained with me. 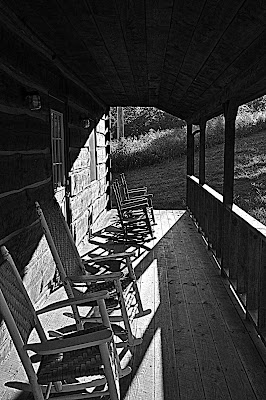 I thought back -- was I taught 'patriotism' -- love and devotion to my country -- in school?

We said the Pledge of Allegiance every day. We sang America the Beautiful, The Star Spangled Banner, and My Country, 'Tis of Thee. (We also sang Dixie, but that's another discussion.) We memorized the Preamble to the Constitution, the Gettysburg Address. In eighth grade Civics, Miss Lucas taught us the basics of how our government works. And we read and memorized patriotic poems like "The Midnight Ride of Paul Revere" and "In Flanders Fields." 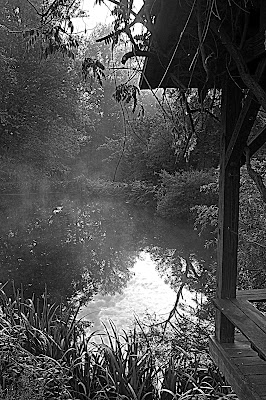 It's in a government's best interest, isn't it, to ensure that its children grow up to love and support their country? But on reflection, all that pledging allegiance and singing patriotic songs seems uncomfortably reminiscent of the methods used by totalitarian regimes -- the Red Guards, Hitler Youth, the blind devotion to the Dear Leader demanded of North Korean citizens.

Of course, our indoctrination was less extreme. For many of us it was just background noise, the default mode. We lived in the USA, therefore we were proud citizens. USA! USA! We're Number One!

For many of us it was the Vietnam War that forced us to come to terms with the the blindly 'patriotic' mindset of "My country, right or wrong, is always right."  Could one disagree with the war one's country was fighting and still be patriotic? Was it true that our flag decal wouldn't get us into heaven anymore?

If they don't teach patriotism in the schools today, it may only be that due to the pressures of constant testing, patriotism, along with Art and Music and Recess had been ditched in favor of reviewing the materials of upcoming tests.

Or it may be that, like religion, there is no one size fits all.

It's too hard to agree on what patriotism is or what's the best way to create patriots. And what kind of patriots anyway  -- blindly obedient to and supportive of the state or knowledgeable and questioning?

Some states (I'm looking at you, Texas) mandate that their history books downplay the unpleasant aspects of the past -- little things like slavery, genocide, imperialism -- in order to portray America as an ideal nation, one that a patriot can be proud of.

To me, this smacks of Soviet revisionism, of the constant re-writing of history in Orwell's 1984 (do they still teach 1984 anymore?)

It's a knotty problem, this patriotism thing. Personally, I'm in favor of knowing the worst of the past, in hopes of doing better in the future.

And, on sober reflection, I think I'd much prefer our children be taught Civics -- how our government works and how it can be changed by voting.

What do you think? I'd especially love to hear from anyone  with ties to our school system -- is patriotism taught and, if so, in what form?

Well, I'm from Texas, so I'm sure my opinion doesn't count and don't even get me started on all the dang testing. That gets me all riled up!

My daughter recently graduated high school and my son is halfway through. We live in a reasonably liberal area, so I would say that here, the darker side of American history is included although it is still skated over a bit lightly. Two things drive this: one is the textbook market, which is national, so that publishers try to make their history books palatable to as wide an audience as possible, including those more conservative and possibly jingoistic areas of the country; two is the standardized testing including the AP tests. When teachers are evaluated on how well their students do on standardized tests, they will, quite obviously, teach to the test rather than teach critical thinking and the importance of source documentation, etc.

Something that struck me when reading your post is what happens in a novel when a character is presented and accepted as a good person and then later some dark deed of their past is brought to light. In teaching American history by including only the good stuff and glossing over slavery, interment camps, genocide, imperialism, etc. we set students up to become either deniers of history or disillusioned with the country altogether. We should be teaching the bad along with the good and stress the need for trying to do better than the past.

Sorry this is so long - you’ve obviously hit a hot button for me!

Oh, but Ms.A -- everyone's opinion counts -- at least that's what we learned in Civics.

This is truly an interesting post. Unfortunately I was not educated in the US, so I can’t comment on that. Although, when I became a US citizen and studied US government and history I was baffled by why people had to say “one nation under God” since there is separation of church and state like in France, and also why there is so much religion in politics. I also was told that before WW2 US children placed their arms up while reciting the pledge (like in Germany) – and stopped after the war, I guess. I had never heard a pledge like this anywhere in Europe (apart from Nazi Germany,) or religion in public schools (they said Grace before breaks in elementary schools in DeKalb County, and at the beginning of the PTA meetings in my children’ schools they would have an invocation/prayer (Christian only.) They don’t pledge in Germany anymore and in any other country either, apart from the US – I think they still do. I don’t think they need to teach patriotism in the US, all the people here, or almost all, make it quite plain, at least to foreigners, that they think the US is the best country in the world, and all the others are below it.

I just thought of something else - in France, we did not have classes in patriotism, but we had what is called “education civique et morale.” France is the only country where courses of civic education are mandatory from primary to high school. It is taught to develop the spirit of responsibility, listening to the other, how to be a good citizen, etc. On the French education site it says, and I’ll translate ”The moral and civic education in schools and colleges implement these principles: think and act for oneself and with others, and be able to argue your position and choice civilly; understand the merits of the standards and rules governing individual and collective behavior - respect and act in accordance with them; recognize and respect the pluralism of opinions, convictions, beliefs and lifestyles; build social and political connection.” At school they also teach you “moral” like manners, how to address people, how to act in society, how to have the courage of your opinions, how to deal honestly with others, not to be scared in society, respect privacy, etc. As for patriotism, they think that families should teach their children. Although we did get so much history, and it always showed that France was one of the greatest countries, with freedom for all, bla bla bla…

Thanks a lot for this post, Vicki, and thanks also to your respondents, particularly Vagabonde's description of French "education civique et morale." We could learn a few things from the French, but, horrors, how could that be, considering that we are the greatest nation on the planet. We have nothing to learn from any other country,especially France.

I too appreciate the thoughtful responses and especially like learning how the French teach civic morality. I'd love to see something like that in our schools but can only imagine the great outcry from a certain segment of our society -- "Oh, no! They're teaching our kids political correctness!"

Dear Vicki, I am late in leaving a comment on this post, but wanted to mention that I recall "under God" being added to the Pledge of Allegiance while I was still in elementary school. Perhaps that was part of the Mc Carthy era? Another childhood memory was that we mostly learned about Virginia history, and the storyline sort of tapered off after the Civil War. Perhaps that was another subtle form teaching a regional patriotism?

I also thank Vagabonde for her very informative comments.

I loved Vagabonds post. Most of my right wing conservative friends think France is weak and immoral. How soon they forget who gave us the Statue of Liberty and the General they sent to show us how to fight for our own liberty.

Before our children get to school what ever ideas they have are based on their parents prejudics. I too would want my great grand children to be educated in schools after the French merhods.

This is such a thoughtful post, Vicki. And I, too, enjoyed reading Vagabonde's recollections of French education.

In the 1950's we recited the pledge every day at the start of the school day, and we also had to memorize and recite the "Midnight Ride of Paul Revere." At girl scouts and at 4-H camp we learned how to fold and salute the flag. But when I was in High School in the early 1960's we had to take a class called "Problems of Democracy." It only just now struck me what a strange title that was. We always called it POD, and I don't remember an emphasis on the "problems" part. But it seems so important to make learning about our government and our responsibilities to it a requirement in schools.

Your black and white photos are lovely, Vicki.

Your black and white images are amazing, love them!

I grew up with the same focus on patriotism that you had. I'd be happy to see it go away. The sooner we teach our children to be a part of the world the better off we will be. I'm most in favor of teaching our heritage and history and what mistakes we might have made. And yes, lots of focus on how our government works and civic responsibilities.