Limoncello!!! It's That Good! 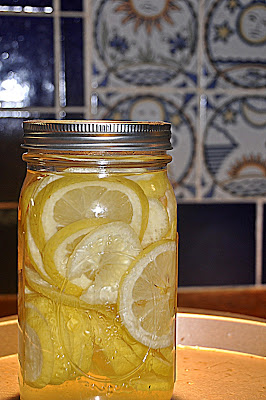 A few weeks back I talked about the Italian cooking class I attended HERE  and I mentioned the homemade limoncello our teacher offered us.

It was so delicious that of course I had to try making some.  My first batch was from one of the many recipes on line and involved grating the rind of many organic lemons, making a simple sugar syrup, adding vodka, and letting it sit for a number of days. (I also made a batch using the rind of organic calamondins --  good but I still prefer the lemon.)

The number of days the mixture steeps varies with the recipe but I found it tasted quite good after only three days and we finished the batch off at two weeks so I can't say how much better it might have been with a longer wait. 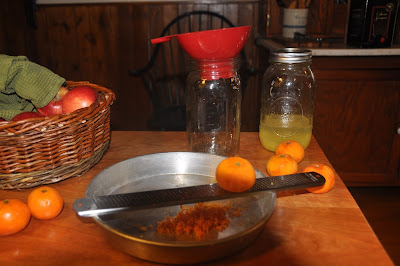 Then in perusing the recipes on line, I saw a batch made with sliced lemons. It looked so pretty that I decided to give that method a try. I sliced three lemons, put the slices in a quart jar, dumped in not quite a quarter cup of sugar and filled the jar with vodka.

Well. It tasted good the next day and last night (three days later), with friends and family to dinner, we finished that batch.

Limoncello is a digestif -- a nice little something to accompany coffee and dessert. This particular incarnation was bright and only slightly sweet -- a kind of adult lemonade.

I've never been a fan of after dinner liqueurs -- they all seem way too syrupy sweet to me.  But limoncello served ice cold -- ahhhh!  Refreshing, not cloying. 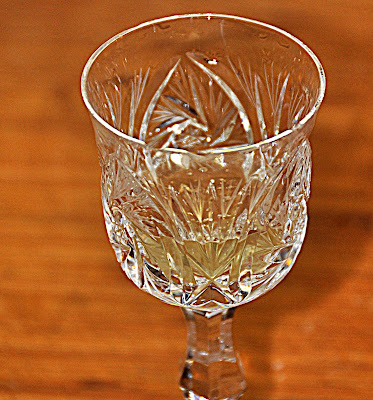 Email ThisBlogThis!Share to TwitterShare to FacebookShare to Pinterest
Labels: limoncello

I would love to be brave enough to try it, but my liver might totally disagree!

Looks delish! i pinned it to Pinterest, if you don't mind.

I must try this.

Oh yeah, it is good. Joanie makes hers with Everclear(some ridiculous high Proof). Takes six weeks. It is a cure for what ails ya and taste so good going down.

This looks so lovely and festive - bene!

I've never had any, but it sure sounds good! I would have commented on FB, but it's jammed up somehow. Glad to have blogs!

Yum! I wonder if anyone has tried making it with honey instead of processed sugar? Maybe I will try a tiny batch and see what happens. ;)

I've been fortunate to sip a glass of a friend's homemade limoncello, and wonder why it is that I have still not made any myself.

Your glass looks a perfect vessel for this delicious liquid.

Your pictures make your digestif look very appetizing. We have a bottle of Limoncello I bought in California (added it to my lemon cake frosting last week) – is there a big difference between the bought liquor and the homemade one?

My mother in France had blackcurrant bushes in her yard and would make blackcurrant liquor – that I love and it was not too sweet. Here, I use liquors (after dinner drinks as they say) a lot, I mean in cooking. I add it to cakes, or for example I like Kahlua on ice cream or the Cherry Heering I got in Denmark. I also place liquor in some of my jams (had some raspberry liquor in my strawberry jam.) I also love just a tad of Cointreau or Grand Marnier in whipped cream – yummy! I like to add Kirsch to ice-cold fruit salads – well I better stop or I’ll go down and get a little glass…

Darla -- I think honey would add too much honey flavor for my taste but it's worth a try.

Vagabonde -- what wonderful ideas you have!

I've not tasted store bought -- just various ages of the homemade. I think I prefer the 'younger' ones but will just have to keep experimenting. :-)