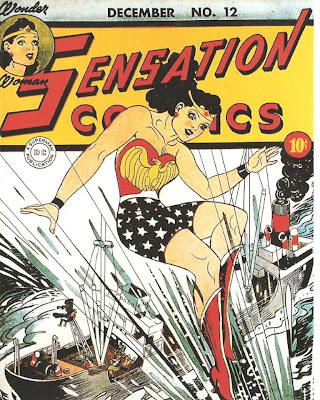 Oh, Wonder Woman -- how you've changed! This super-hero daughter of the Amazon queen came into being in the Forties -- wearing first a flirty star-spangled skirt and later, rather dorky starry shorts. (She got her start fighting the Axis powers during World War II, therefore the patriotic garb.) 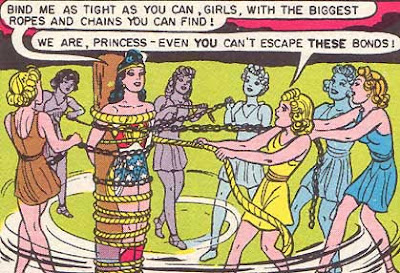 This is the Wonder Woman of the early Fifties -- the one I remember. With her golden Lasso of Truth, her tiara that doubled as a boomerang, her pair of bracelets with which she could deflect bullets, and her wonderful invisible airplane, she was a force to be reckoned with, a pre-women's lib, liberated woman, to be sure. (She'll break free of that rope, you can be bet on it!)

Research shows me that in the Fifties,  Wonder Woman was accused of promoting a lesbian agenda  ...

Hmm ... I guess I wasn't paying attention back then. I was fond of WW (or Diana Prince as she was known when not in her spangled shorts) but really, we were just friends. Besides, she had a boyfriend. Steve Trevor showed up fairly often -- usually in some sort of trouble so that she could rescue him.

In the mid-fifties I abandoned comic books for paperback science-fiction. And by the time there was a Wonder Woman TV show, I'd pretty much lost interest in the strong-willed Amazon princess  -- but in surfing the Internet to find out what WW's been up to, I see she's still  fighting crime ... and  in spite of her age (two years older than I) looking more fabulous than ever!

Wish I knew her secret.

UPDATE: My older son just sent me this LINK  to more images of WW by this illustrator, Brian Bolland. Oh. My. Goodness. 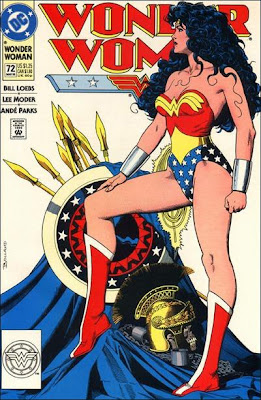 An animated Wonder Woman movie came out last year that was a lot of fun - smart, sassy, and a good storyline. Worth your time if you can get your hands on it (I bought it on iTunes).

I think the secret is to find yourself a good illustrator. I could benefit from a bit a re-drawing myself. Although, I have ceased the practice of getting changed in public telephone kiosks these days!

Ah yes, I thought Wonder Woman was quite something in my youth, and as for today's version, I'm with Martin H. in that the secret is a good illustrator, and I'm also glad I wasn't drinking my coffee when I read the rest of his comment! HA!

Ha! Too funny! I don't know about promoting a lesbian agena but I do know a gay man who claims at 5 he started dressing up as Wonder Woman! :)

Looking for the illustrator who did that last picture . . .

Very interesting ...
I had heard , of course of this famous character, but I didn' read many comics where she appeared .

A beautiful woman ...the queen of
Amazons ...I understand than she can tease libido of...men and/or women .

I used to encounter every now and then a mother with two small children. One day I was told she had played Wonder Woman" in the TV series, Lynda Carter. She was married to an attorney back then.

Great to see that again and yes, she certainly has changed - a lot. I used to love watching on the television at one time. I was a lot younger then. I don't think it would interest me now though.
Thanks for the memories.
Blessings, Star

I grew up with Lynda Carter's version of Wonder Woman, and I too loved how strong a character she was. Yes, she was in love with a great-looking man, but did not need him to rescue her...she rescued him. How cool.

Oh, here's a funny one for you. When Jimmy Carter was running for president, my husband's teacher asked the students to write a paper saying who they would vote for and why. He said Jimmy Carter because he was married to Wonder Woman. :-)

I remember the Barbarella movie, Miss Yves, but never saw the comics.

And Merisi, how cool about your seeing Lynda Carter -- even after she'd hung up her golden lasso! She was so beautiful with the dark hair and startling blue eyes.

I would have loved the TV series if I'd been a bit younger . . .

Wonderful story, Susan! I wonder if WW was one of those Jimmy Carter had felt lust in his heart for . . . ;-)

Hey, I've aleady had such a good response, I felt confident enough to go ahead and set up the new blog and photo prompt! First one due Tuesday, Feb. 16 to give everyone enough time to find the new blog and sign the Mr. Linky. Fun! Thanks for being willing to give it a go! xox

I still have my wonder woman barbie doll : )

Psychologist William Moulton Marston created Wonder Woman under his pen-name of Charles Moulton. He also invented the systolic blood-pressure test, used as a component in the polygraph. (Kind of a forerunner of the Lasso of Truth?)

He led a brief (53 years) but fascinating life. For one thing, he lived a polyamorous life with his wife and a second woman. For more details on the man, go here: http://en.wikipedia.org/wiki/William_Moulton_Marston

Well, that's pretty fascinating, Silver Fox! I love the connection with The Golden Lasso of Truth! Perfect. I'll check him out!