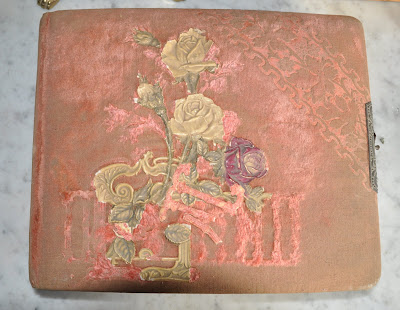 This album belonged to my husband's grandmother, Fay Parker. It must have been quite impressive when new. I've read in novels of the Victorian and Edwardian eras about 'plush albums' -- I think this may be one, covered as it is in pink velvet. 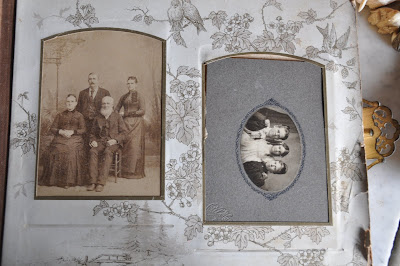 The pages are beautiful with special slots for pictures. I have no idea who the dour group of four are but the three in the other picture are Annie and Walter Parker with young Fay between them. 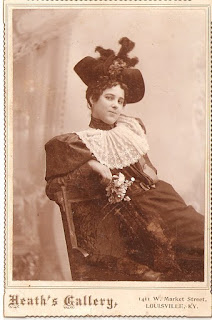 I do wish I knew who this saucy minx was! 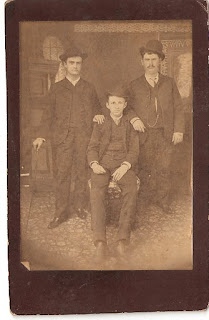 This is, alas, the only picture in the album that's identified. On its back, in fading pencil it says "1887 - Kissimmee, Florida" and gives three names. The first is completely illegible, the second is James T___, and the third is Walter Parker -- my husband's maternal great grandfather.
Kissimmee (a Seminole Indian name with the accent on the second syllable) was a cow town. As late as the 1950's Florida had more cattle than Texas, believe it or not.
These three look like fellas in a saloon, waiting for a fight to break out. Look at the rakish tilt of Walter's hat!
Looks are deceiving. Walter went on to become a respectable business man and owner of a big hotel in Tampa.
Here are some more pictures from the pink plush album. 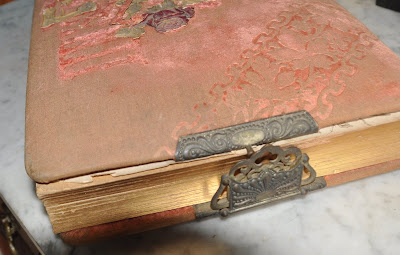 What a treasure. I especially like the picture of Walter and his friends. I'd never heard the term 'plush album' before now, but seeing the one you have, it's hard to see how it could be described any other way.

My mum tells of a family album belonging to her paternal grandfather. She used to be fascinated by it as a child. But it's no longer with us and its disappearance remains a mystery.

Hello Vicky,
What a beautiful old album. I know how it is delightful to look at old photos, photos of unknowns. I like the mystery attached to all those old folks. Like you I have a big box full of yellowed photos the oldest one being one of my great grand-father who died in 1862. It is probably dated 1850. But I have also some groups that I cannot identify but I like to look at the costumes and like to imagine their lives.
We are lucky to have these treasures and more if we are insterested in genealogy. This is my case. I have a part of my tree on Geneanet. Are you interested in genealogy ?
I thank you for your kind comments on my art.
Have a nice sunday.

A great treasure,to repeat the words of Martin H !
I love the photo of the smart lady ...

I am sure that 'plush album' was quite something in its day, and what an elaborate clasp too. I love old pictures. I have an old album from my husband's mother, and only a few pictures are identified. I wish when she had gone over the pictures with us years ago that I'd written down all that she said.

Vick this album is wonderful! I love the young woman who seems to be reading a letter. You know this would look so good beside Scarlett's hat on the bed! :)

Hey, Martin -- I do love this album in spite of the fact that it's my husband's family and so I didn't grow up hearing all the stories. His grandmother Fay was still around and I did get to know her a bit.

Helene - I am interested in genealogy but haven't had the time to pursue it. Fortunately, I have an uncle who has done quite a bit on our family tree.

I do too, Miss Yves.

You are so right, Pat! I've done some of that writing down but I have many more albums that are all mysteries to me.

Bet you could find something similar on E-Bay, Carol!

The picture you use in your icon looks as if it belongs in my album, Jon Lee!

And among your precious family treasures, are there keepsakes or "dance card "(carnet de bal) ,

Hi Vicki, This just reinforces my plan to make sorting through a big box of photos that my sister gave to me recently. I plan to identify as many people as possible since I realized that if I don't, yet one more generation of forgetfulness will have happened. It is a good new retirement task since I'm still enjoying the "doing whatever I want to stage." Thanks.

Indeed it is quite a treasure. I love looking at such old photographs. What a shame no one labeled them, but they are a delight nonetheless.

Miss Yves, no dance cards have turned up yet, but there are some other interesting bits and pieces which I'll post about one day.

I know what you mean, Joyce -- now that I'm the older generation (or Wisdom Keeper, as I like to think of it), I'd better get busy!

Yes, mountainwoman, they are fun to make up stories about. The dude in the album with the fancy matching mustache and hair, for instance -- I'm sure there's a good story there.

I love old pictures. I don't have any myself, so often look for some at flea markets and such. They are so interesting, trying to put a story to what you're looking at. I was finally able to purchase a book put together by a distant cousin in Georgia, The Thrifts of the Okefenokee. Lots of old family pictures and stories in there. The names they had many eons ago interest me more than anything really. Some of them are so unusual.

I keep a folder on my computer of those neat old names, Susan, And I check the local obituaries.

But my favorite name is a woman of my age or a little younger -- Treasure Frisby. Her daddy's name was Plato.

A true treasure!! Makes me wish all those folks could talk from the photos-and tell us about their lives.